What Will Become of The Jersey City Museum? 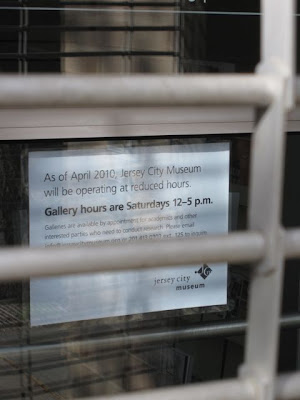 As current economic conditions continue to present challenges to art institutions and other non-profit organizations across the country, Jersey City Museum has taken appropriate steps to reduce operating costs and manage expenses. The museum, a leading art institution in the area, is committed to delivering on its mission to bring art and art education to Jersey City, Hudson County, and the greater metropolitan area.

Once again a new building killed a museum. It happened to the Pasadena Museum in the 1970's  -- one of the most vital art museums in the world at the time; and almost again with the The Museum of Contemporary Art, Los Angeles  and, in the last few months, the Art Gallery of Ontario laid off 23 staffers after a Frank Gehry addition, and The Art Institute of Chicago is closing galleries because of the new Renzo Piano addition. This goes on and on. Ideally the Jersey City Museum should move to a cheaper, funkier, more accessible space, closer to public transportation -- maybe in Journal Square. But short of that, it should change its mission and become a true community space.

The Museum's mission as it now stands is ludicrously grandiose: "to bring art and art education to Jersey City, Hudson County, and the greater metropolitan area." It doesn't make any sense to have a traditional, art collecting museum 5 minutes away from Manhattan. Their pathetic effort to compete is embarrassing, and it bankrupted the Museum. I don't think they should even do group exhibitions -- does the area really need another exhibition, however good? Why spend the money, and expend resources and effort, when 5 minutes away are all the good shows one could want?

So what should the museum do? Imho, it should become a truly indigenous community institution in the broadest sense. The permanent collection should be relegated to a small space and the focus should be on what's unique to Jersey City: local artists, preferably exhibited in solo shows, with perhaps an occasional group show-- if there's a compelling reason for it.  I'd go so far as to suggest they make an effort to sell art and take a percentage of sales. Why not? The money can help pay for their over-ambitious building.

I'd even go further. Open the Museum up to all kinds of community events: rock concerts (we have all these musicians in Jersey City, but very few venues), classical concerts, movies, theater (too bad the Museum's theater doesn't have wings). I'm sure an organization like Art House could figure out many good ways to use the space. They should also have a cafe and bar. And why not rent out the space for bar mitzvahs and weddings or any other event that could bring in some money and help the community at the same time.

Seems odd that "community out reach" does not include school children, whose teachers will be unable to bring their classes on the weekdays. Seems like they do not know what they are doing...