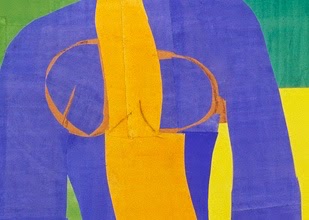 In fact, because of the way the shapes slightly overlap at their corners, or barely butt up against each other, they are all anchored together and are visually pushed out into the viewer's space.
By the way, now is not a good time to go to MoMA.
Even the members-only "Early Hours" (in which member's are allowed to view certain exhibitions an hour before the museum opens to the public) was packed. You might want to wait until school starts up again.
Posted by Charles Kessler at 12:07 PM 1 comment: