Mana Contemporary Art Center had one of its mammoth open houses last weekend – a combination of art openings, concerts and open studios.
Mana Contemporary is one of the largest private art institutions in the metropolitan area – 125,000 square feet and growing! Like Home Depot or Best Buy, Mana is what in retail is known as a “category killer.” They focus on one category and offer a wide range of services within that category. Mana's main for-profit activity is art storage, and, in that capacity, they provide storage for almost every museum in the area and for private collectors as well. But they also provide: art transportation, crating, framing, viewing galleries, studio space (they say for 70 artists),
dance rehearsal space,
office/exhibition and storage space for art foundations, foundry services, conservation and restoration labs and even what they call a "beer garden."
Mana, or something like it, should have been in the Powerhouse Arts District — ten-blocks of historic warehouses in Downtown Jersey City that was supposed to become an arts and entertainment district. Inexcusably the city not only allowed the demolition of 111 First Street (and 110 First Street – see blog logo photo), one of the most historic warehouses which, at one time, housed more than 200 artist studios, but they encouraged it by rezoning the area for 60 stories. Subsequently other parts of the district were re-zoned for high-rise, and other buildings were demolished, in effect destroying any possibility of a viable warehouse district.
Victory Hall Drawing Rooms, a former convent turned exhibition space in Downtown Jersey City, has  happily re-opened after a six-month recovery from the devastation of Hurricane Sandy. Their return show, Night & Day, is a beauty. Seven local artists (Tim Daly, Steve Singer, Michael DiFeo, Kay Kenny, Tomomi Ono, Heidi Curko and Sandy DeSando) were each given their own room to display work on the theme of, uh, night and day.

White Eagle Hall
A couple of weeks ago, developer Ben LoPiccolo presented plans for the restoration of a once-beautiful 1910 theater in the Italian Village neighborhood of Downtown Jersey City. The plan calls for the redevelopment of the theater into a black box theater with a seating capacity of 400 (or 800 standing), lounges, offices and two restaurants on the ground level.
Unless they can divide the space with movable walls (which they are considering), it will be too big and too expensive for any of the local performing arts groups. Popular rock groups would probably be the only ones that could fill it.

The Laugh Tour
The stand-up comedy show hosted by Rich Kiamco at Art House Productions is getting better and better. The headliner on April 27th was Mike Britt and he was hilarious – they all were. The next one won't be in Jersey City until September 28th – don't miss it.

New Jersey City University's Big Band Concert Featuring Kurt Elling
Kurt Elling may be the best jazz singer around today, and this concert was as good as anything you could see in New York. NJCU, it turns out, is one of the best jazz schools in the country. Who knew? Their concerts are usually held in this classy 1000-seat theater, the Margaret Williams Theatre, which is worth the trip in itself.
And finally, my favorite kind of performance art: a chili cook-off. The weather was dazzling this weekend, and the vibes were mellow at this amiable neighborhood event. Good food, cheap booze and free live music — it doesn't get better than this! 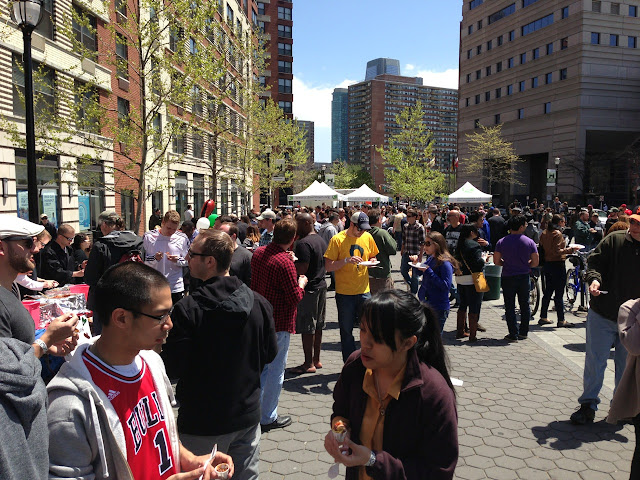 Update and correction:
The New York Times has an article on them today. The Times put Mana's total space at a more credible 1.5 million square feet on 35 acres, as opposed to my 125,000 square. I don't know where I got that number but it is obviously way off.

On the other hand, the Times accepted Mana's figures for the number of studio spaces they have: "About 120 painters, sculptors and photographers now have studios at Mana." But the literature they handed out for their open house claimed to have 70 artist studios, and I only saw about a dozen studios that were open, and only possibly another twenty or so other ones. So unless there are a lot of artist studios hidden on another floor, or in another building somewhere, something is wrong.

Posted by Charles Kessler at 10:21 AM No comments: