The Joy of Life

I went to the Barnes Museum in Philadelphia again and spent a lot of time looking at Matisse's great painting The Joy of Life. This is one of the most important paintings in the history of modern art. It's the painting that goaded Picasso to paint Les Demoiselles d'Avignon. There's been plenty written about it, of course, but I think I made an observation that might not be in the literature. Everything I ever read about the painting (The Barnes catalog, p.271, for example) refers to a piper (possibly Pan) with two goats (on the right). 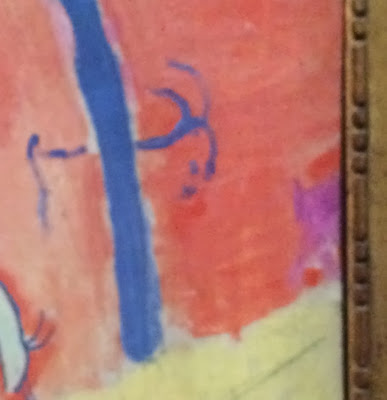 But there is clearly an outline of a third goat further to the right, plus – and I think this is significant – the rear end of a fourth goat painted a purplish brown. I think what's happening in the painting is the piper is herding the goats into a sort of cave of red/orange light, and as the goats enter they change color and become more obscured by the colored light.
Moreover, and this is much more speculative, the figures on the left side of the painting can be thought of as having come out of the red and orange fields of color. So an interpretation of what's going on in the painting is the figures come out of red/orange light, romp about in an arcadian setting which we are privileged to witness, and then return to their red/orange environment.
Posted by Charles Kessler at 4:35 PM No comments:

Most Chelsea galleries are still exhibiting giant, expensive over-productions, but the two best shows I saw this time around were of relatively small work. Andrea Rosen Gallery has a group show, curated by Elena Filipovic, that the Whitney Museum should have done a long time ago: Counter Forms – Tetsumi Kudo, Alina Szapocznikow, Paul Thek, Hannah Wilke (until November 16th). It's four artists from the 1960s and 70s who likely never knew of each other, but who nevertheless worked in a similar manner.
Their work is tactile, sexual, and often funny or disturbing – and about as different from the prevailing clean, minimalist trend of the day as you can imagine.
The other show is also sculpture (ceramics), and is also tactile and has sexual overtones, but it's work done in the last year: Arlene Shechet, Slip at Sikkema Jenkins Gallery (until November 16th).
Maybe with the new popularity of Ken Prices's work, ceramics has become popular, or at least accepted. There certainly has been a lot of it shown lately, and I think that's a good thing – so far anyway.

Posted by Charles Kessler at 6:15 PM No comments: 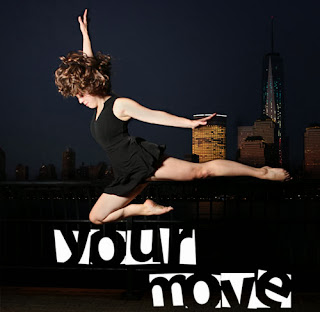 I've seen and loved this festival every year, and tonight was the best yet: first rate modern dance, a small theater with well-banked seats, and only $12 online ($18 at the door). Go if you possibly can.
Posted by Charles Kessler at 12:05 AM No comments: