Forgive me LeftBank for I have sinned; it's been two months since my last post. Five hail Saltz's and an entry a week?  Ah.... sweet absolution.
Posted by Irene Borngraeber at 11:24 PM 1 comment:

There could be said to exist a school of eccentric abstraction in New York that would include artists like Carroll Dunham, Tom Noskowski, Amy Sillman, Jane Fine, and the late Elizabeth Murray. Much of the visual instincts of this loose cohort can be seen in Joanne Greenbaum’s work. On the surface it’s friendly, energetic, edgy, hip and savvy. Its colors drift toward the day glow palette of sharpie markers, so it also exudes a pop feel. Like Terry Winters’ work over the past decade there is also an awareness of computer generated repetition, or at least the semblance of the image as endlessly reproduced and lit from behind. There is also the quality that these images were once smaller and were blown up in size to exude an intimate extroversion, similar to Noskowski’s work.

Ms. Greenbaum’s paintings evolve out of an additive scaffold of drawing that often resembles the nervous marginalia of a student’s notebook, an unconscious construction of a tangeraity of lines that assemble into loci of space grid hysterics. Onto and across these structures she finds areas to block and slash paint in repetitive gestures that form either voids that single out the previously laid lines of the under-drawing, or form vaguely figurative ‘personages’ a la David Smith’s drawings or early Pollock. Her paintings in this show almost all share a ragged vortex that splays the compositions like spin art.

When looking at these works I thought for the thousandth time that painting no longer has to make great pictures. The authority of the static image has been so incessantly undermined by the increasing tolerance for sophisticated time- based media to the extent that painting no longer functions as a rock of facture in that slipstream or slip-deluge of visual gloss. Painting is nothing to hang your hat on anymore. So I was impressed at the sense of recognition and comfort I got from this show. Perhaps it is in the playful, offhand way in which the artist assembles her image. Maybe it has to do with the multiple layers of lines and thick paint, which erase and reveal the doodles cast large. I think it is also because there is a rich pathos in these paintings, which might reside in the simple guilty pleasure of witnessing a pathetic human reflexive attempt to manage the void. These paintings are like banana peels on the verge of nothingness. It is an equivocal response to an arcane existential longing for fixedness or certainty. These paintings are philosophically flaky in a serious way. -Tom McGlynn

Posted by Tom McGlynn at 4:43 PM No comments: 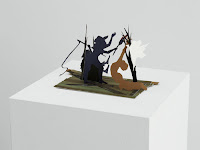 Kara Walker is a trip. I imagine that probably 75 per cent of the people encountering her work don’t get her wicked sense of humor. Her work has developed a unique sardonic tone which is underpinned in this show by fragmented diaristic musings in postmodern form and more “primitive” fabrications in paper, canvas, puppet show video and other low- tech presentations. She makes her points exquisitely vague and simultaneously, insistently, historically and politically specific. To use old-fashioned street vernacular, she’s,” doing the dozens” with her audience, pulling legs all over the place but playing as serious as sin. Slavery was a sin but misunderstanding this work to be just about that would be a worse one.

So how does one proceed to put forth a historical fact (morphed into customary emancipation narrative) like the subjugation of multiple generations of human beings in the form of a joke and expect to get away with it? The irony of this work doesn’t escape us. It chases after our suppressed mix of longing for retribution, resolution, absolution, and anger and stirs it up into a gleeful whirlwind. Has Walker ever used tornadoes in her work? Some of the word/drawings in this show have the gloomy yet charged palette of before/after the storm. On one amorphous composition I noted, she sloppily paints “Blathering on and on about her goddamed history and our place in it” The relationship of hers to ours is significant here. Does she mean her specific personal experience, inherited narratives attached to her, her ownership of these or rejection of them? Or maybe she wants to make light of “our” fatigue with this particular tack? One of the things I love about Walker as an artist is that she is so aware of the fallacies contained within her visual representations of the unrepresentable along with their critical reception or rejection over her career.

She includes large collaged paintings in this show, a form I hadn’t seen used by her before. Her trademark paper silhouettes are pasted to these messy, mostly white -washed canvases with bumps and erasures, texture and blankness. The seemed frieze like to me, but also crafty, like decoupaged pages from scrapbooks worked up to a somewhat monumental scale. Two small paper sculptures had the same crafty, not quite childlike effect.

In the back room of the gallery the artist presented a video based on a historic (19th century?) race riot intertwined with snatches of what looked like shadow puppet evocations of books like The Color Purple or Beloved. I really didn’t want to know the exact sources since Walker’s work looks the least attractive to me through this type of determinist lens. The video was scored with, to my ear, an ambiguously authentic ragtime

Walker will be presenting a project characteristically titled The Painter is the colonizing entity. How do Paintings understand the concept of liberty? And who will teach them?

at the New Museum from September 25th.

Posted by Tom McGlynn at 4:39 PM No comments: