I guess it's pretty obvious from the dearth of recent posts that I haven't felt like writing lately. I've been seeing as much art as usual, and, if anything, I've been traveling more than usual to look at art: Boston, Denver, and recently, New Haven/Yale. So what I've decided to do for now is simply post photos of work I've seen that may be of interest, and maybe write something very brief about them. I'll start here with my January trip to Denver to see Clyfford Still's works on paper – something people didn't even know existed. Still gave the Clyfford Still Museum more than 1575 of them in addition to the 825 paintings he gave the museum – 94 percent of his entire output! (I wrote about Clyfford Still in a lot more detail here and here.)

Below is the last drawing, the last work of art, Still made.

Dean Sobel, the museum director, was kind enough to take me around the conservation labs and show me some of Still's works on paper.

For the most part, the paintings Still gave the museum are in excellent shape, but some are damaged, and I got a chance to see some of the ones they are working on. Here's a detail close-up of one of the most damaged paintings: 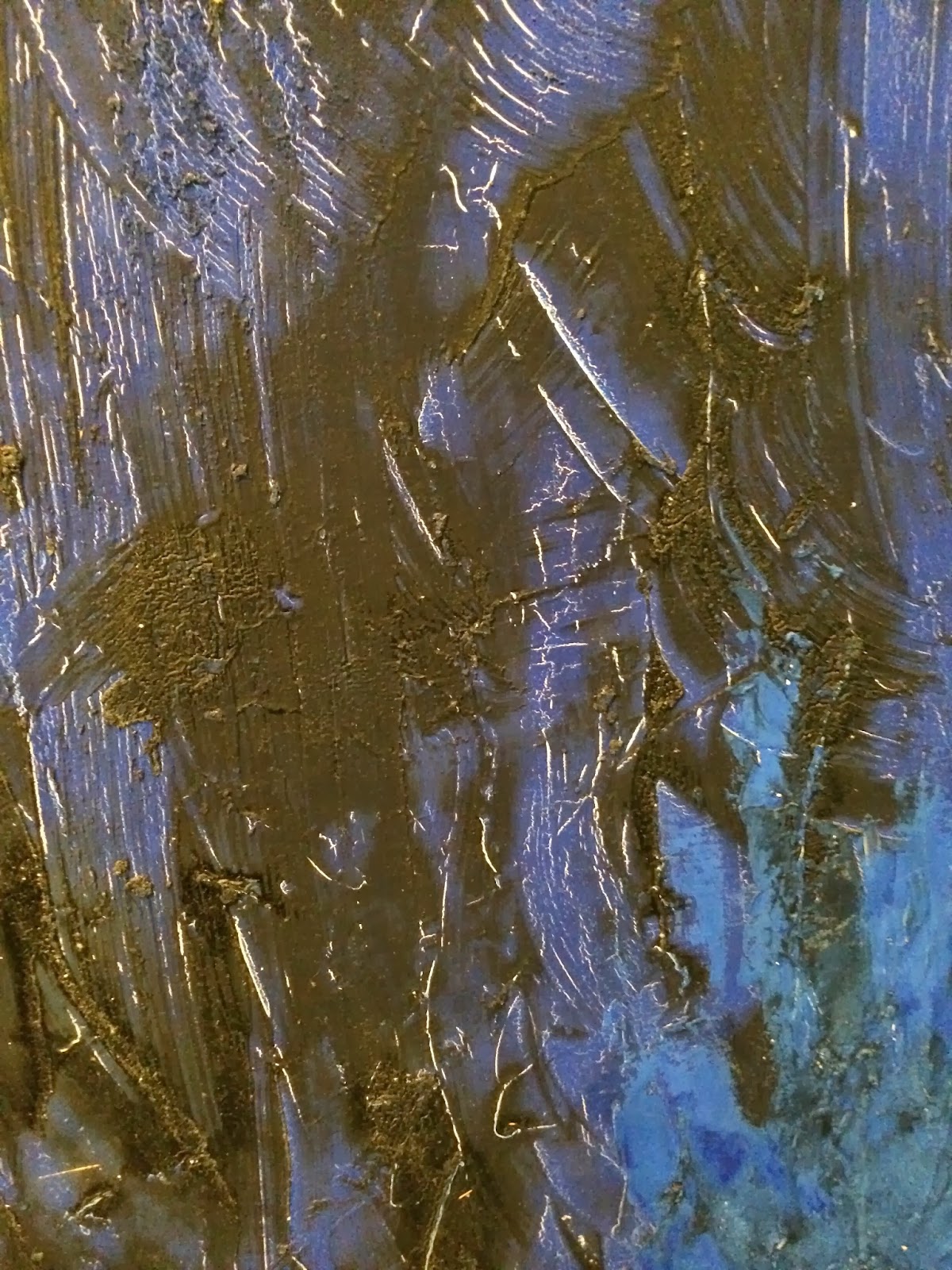 In addition to the enormous collection of Still's art, the museum has Still's complete archives – books, record albums, letters, articles he kept over the years – everything! The museum has a well-funded research center which, to quote their press release, "will foster humanities-based engagement with the Clyfford Still Museum collections, its archives and the manifold ideas they embody." So these archives will be thoroughly studied.

I also went to the Denver Art Museum, which I wrote about before here. I spent most of my time with their extensive pre-Columbian art collection and this gallery of Northwest Coast Indian Art:
The Welcome Figure once held a large copper plate in its upraised arms. Such plates signified the wealth and power of the clan, so while you were welcomed, you would also know you're dealing with a prestigious clan. And the house partition separated the chief's apartment from the rest of the clan's dwelling, forming a dramatic entrance.

I came across a couple of good contemporary art galleries too – David B. Smith and Robischon – both near the excellent Denver Museum of Contemporary Art. So all in all a lot of good art to see in Denver and an excellent night-life too.

More on my December Trip to Boston

I’ve been busy with some family matters as well as some traveling. Sorry for the delay, but here's the second part of my report on Boston.

The Museum of Fine Arts (MFA) was strangely empty when I visited. There were times I didn't see another soul for several rooms – not even a guard – and it kind of creeped me out. I was told it was the time of year, and it's probably true since my hotel was pretty empty too. Everyone must have been in New York at the Museum of Modern Art.
I don't know why I never noticed this before, but the European paintings are hung relatively high at the MFA, not just those in the salon style galleries like room 250, but everywhere. Why? It's not like visitors have to look over crowds of people to see.

I discovered a pretty good place to eat at the museum – in the basement cafeteria. Not only is the food much cheaper and not bad, but there's even a nice view looking out at the handsome Calderwood Courtyard.
And it's the only place in the Museum that's open for breakfast. The cafeteria is used mostly by museum employees, and you can only get there via a stairway in the Contemporary Art wing near the entrance to the Foster Gallery. Don't tell anyone!

I saw a lot of John Singer Sargent's art in Boston: his paintings at the MFA collection, of course, as well as his sparkling watercolors at both the MFA and the Gardner,
and his awe-inspiring if overblown mural, The Triumph of Religion, at the Boston Public Central Library. 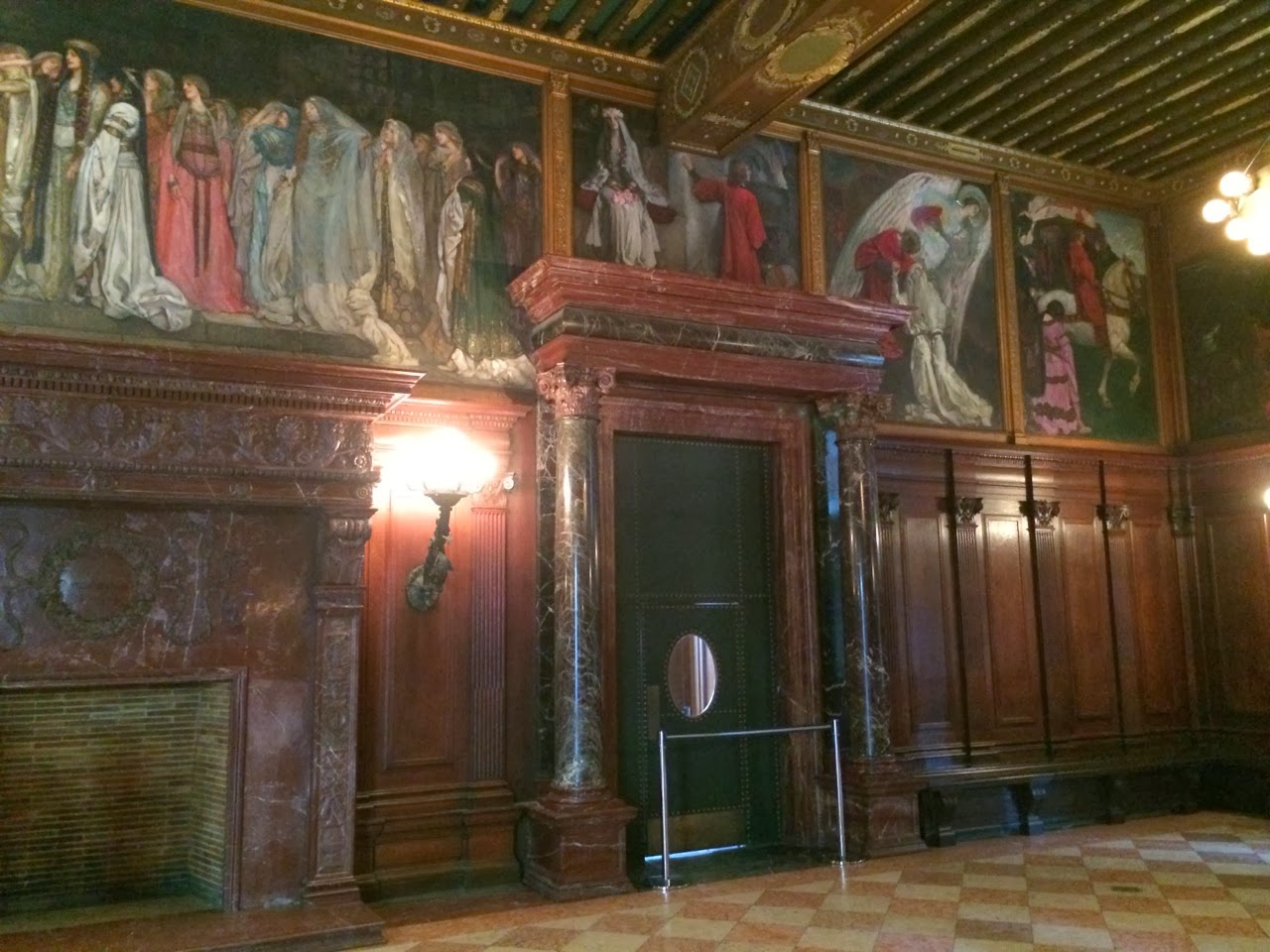 I highly recommend the free tour of this grand and historic McKim, Mead, and White, 1888-95 building. In addition to the Sargent murals, there are monumental ones by Puvis de Chavannes, and bronzes and mosaics by several American artist. Here's a link about the tour and what it covers. www.bpl.org/tours

The gallery scene moved away from Newberry Street — at least the more vital galleries moved. They are now mostly located in what's called by the embarrassingly unoriginal name SoWa (South of Washington — on Thayer Street Between Harrison Ave. and Albany Street, a short walk from the Broadway Station on the Red Line over the 4th Street bridge). There are only about a dozen galleries, but they're good ones, and they show local as well as international art. The ones I liked best were Acme, Steven Zevitas and especially Miller/Yezerski (where Howard Yerzerski was kind enough to spend a lot of time with me). But it's easy enough to check them all out.

Next post: Denver, and especially the Clyfford Still Museum's exhibition of Still's works on paper.
Posted by Charles Kessler at 4:49 PM No comments: