The Art World is Obsessed With Felines

Well, I want to be trendy too, so I've decided to devote this post to photos of lions that you can find scattered about the Metropolitan Museum.

***
And NOT at the Met, but just for the fun of it, is this unattributed photo that's been making the social media rounds lately:
Posted by Charles Kessler at 5:28 PM No comments:

How to Make Jersey City Even Better

Warning: Although I have written about similar issues before, I feel I must alert readers that this post has nothing to do with art – unless, like some people (Michael Kimmelman?), you consider Urban Planning an art form. It is also about local Jersey City matters that may be of little general interest. Feel free to skip it.

I went on a brief tour of Bushwick with Eric Silverman, partner in one of the few, maybe the only, enlightened development firms in Jersey City. (Just that he wanted to explore Bushwick is proof of enlightenment in my book.) On the way there he asked me if I had any ideas to make Jersey City better, and I mentioned a few. Since I think they were such clever ideas (none of which originated with me), and I have this blog as a soap box, I thought I'd present them. But first some background for those unfamiliar with Jersey City.
People often confuse Jersey City with Hoboken, its tiny (population just over 50,000) northern neighbor. But Jersey City is the second largest city in New Jersey with a population of more than 250,000 and growing (slightly less than Newark's 277,000). Jersey City is across the Hudson River from lower Manhattan (5 minutes on the PATH train to the World Trade Center, 10 minutes to the Village) and it's overshadowed by it, like Brooklyn used to be.
I'll mainly be writing about a small part of Jersey City, the Historic Downtown where my wife and I have lived for 31 years. The building stock here is primarily 19th-century one-to-four-story brick row-houses (inaccurately known as brownstones). Lately the Downtown has become affluent, hip and popular. (Who coulda knowd?)
Fortunately, at least for now, it's still diverse (the second most diverse city in the country according to a Brown University study), and pedestrian friendly (we don't even own a car). Jersey City has suffered through corrupt and (even worse in terms of the impact on the city) stupid and arrogant political administrations, but there seems to be some hope for the future in that respect.

Newark Avenue:
Newark Avenue is one of the main shopping streets in Jersey City. It cuts diagonally through the city, and in the Downtown section, many streets intersect it at an acute angle making the intersections too wide to cross comfortably. These intersections (see example below) are also dangerous since cars don't need to slow down to turn onto Newark Avenue. Here's one solution that not only makes it safer for pedestrians, but also creates a space where it's possible to have a small green space or plaza: 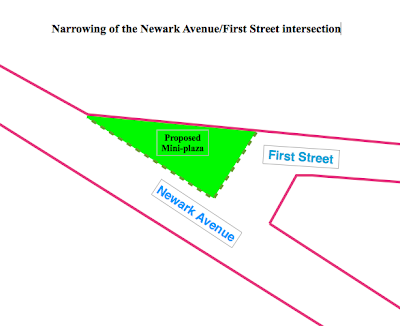 Columbus Drive:
Columbus Drive cuts through the middle of the Historic District, but it's too wide and too fast to comfortably cross (and the walk signal intervals at the intersection of Grove Street are confusing – but that's another matter).
A median strip to slow traffic and narrow the street would be an improvement, but better would be a barrier strip and perpendicular parking (the barrier strip would make it safer to back out of a parking space). Like this:
The larger stores on the south side of Newark Avenue extend all the way through to Columbus Drive, but at present most only have their loading docks on Columbus Drive making for an ugly and dull street. (Historically a railroad literally ran down the middle of Columbus Drive – it was still called Railroad Avenue when we first moved here – so it was never attractive to pedestrians or retail activity.) Perhaps the extra street parking and calmer traffic might encourage some of the retailers to open entrances on the street.

AND, since these stores tend to be relatively wide, have high ceilings and few columns, they would make excellent black box theaters and/or entertainment venues for small theaters, dance companies like Nimbus Dance Works, and entertainment venues like Maxwell’s. Especially suitable are the one-story buildings which might be easy to shore up and remove all the columns. 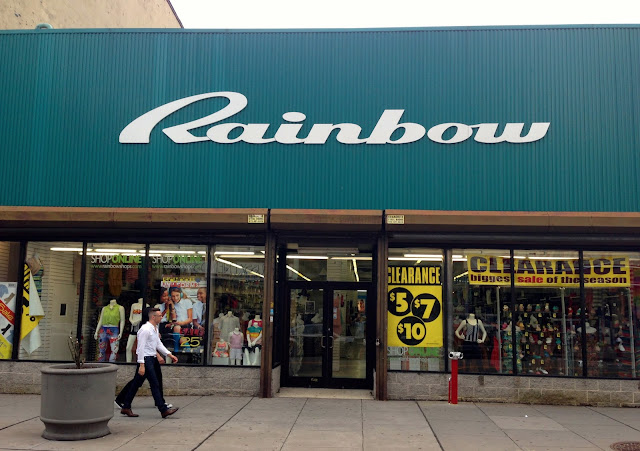 As long as the entrances to the theaters/entertainment venues are on Columbus Drive, it's unlikely they would be a nuisance to the residents, especially since they are only a block or two from the PATH train, so parking in residential areas shouldn't be an issue. (The city might consider putting limits on the total number of bars allowed in the area to prevent an obnoxious bar scene like Hoboken or the Lower East Side.)

Luis Muñoz Marin Boulevard:
Marin Boulevard, because it also is too wide and too fast (it's a main route to the Holland Tunnel), is a barrier between the Historic Downtown and the new high-rise corporations and luxury residential buildings recently built along the waterfront. The Powerhouse Arts District (PAD) was supposed to induce people living along the isolated waterfront to come out of their apartments and into the Historic Downtown, but sadly the PAD is not going to happen now, so something else needs to be done.

Narrowing Marin to two lanes by adding a median strip and perhaps allowing parking (which actually makes pedestrians feel safer since cars provide a safety barrier) would slow traffic and make it easier and more pleasant to cross. (I can hear commuters, most from outside the area BTW, complaining that it would slow traffic all right – to a crawl. But that's not necessarily a bad thing since it would encourage commuters to stay on the highway to get to the tunnel, and not use the Downtown as a shortcut.)

East of Luis Muñoz Marin Boulevard:
Many of the older high-rise buildings on the east side of Marin Boulevard (the other side of Marin from the Historic District) were built at a time when it was fashionable to build "towers in a park" – tall buildings surrounded by land and surface parking lots. This makes for ugly, boring streets, and unpleasant places to walk.
Better would be to build parking structures (if parking absolutely must be replaced) on this valuable land, and surround the parking structures with retail on the ground floor, and maybe even construct more residential on top of the parking structures.

Design Center and Incubator:
While a lot of artists left Jersey City after the 111 First Street fiasco, there are still many designers living here. This facility would give them a venue and perhaps make Jersey City known as a center for design. The facility could provide common equipment and spaces for designing, and possibly also for fabricating their designs. Showrooms and retail spaces open to the public to promote and sell their designs could also be a part of it.  This center could be Downtown, but it might be even more beneficial for Journal Square.

Next post: back to art!
Posted by Charles Kessler at 5:16 PM 2 comments:

Last Thursday I got to go on a tour of PS1's contribution to the multi-venue exhibition, EXPO 1 (until September 2nd) – check here for the other venues. The tour was lead by the curator of the PS1 exhibition, the brilliant director of MoMA PS1, Klaus Biesenbach. To quote from the exhibition website, the show is "an exploration of ecological challenges in the context of the economic and sociopolitical instability of the early 21st century." Biesenbach mentioned in passing that he was concerned such a show could be embarrassing, but he felt that after hurricane Sandy it was important to do. And, as expected in a show as didactic as this, some of the work is indeed heavy-handed and triggered my "oh please" reaction.
Fortunately most of the art isn't silly. There's this subtle work by Charles Ray:
And this tense video of a wolf and a deer confined in the same room:
And most of all, a powerful, breathtaking/heartbreaking monumental work by Adrián Villar Rojas (whom I wrote about before here) that PS1 commissioned to be used as a lecture room for the exhibition's EXPO school.

It's sort of like a science fiction Greek amphitheater made of clay which, as it dries, will crumble and eventually fall apart. It's already cracking.
There's a threatening, eerie presence about the place that's diminished when a lot of people are around, so if possible, try to view this when the amphitheater isn't being used. You can check the schedule  here.

Posted by Charles Kessler at 4:12 PM No comments: