My Two Weeks with Andy Warhol and the Velvet Underground

I was still in the Graduate School of Business at UCLA in 1966, about to transfer to the Art History Department (more on that someday), when I learned Andy Warhol and the Velvet Underground were coming to LA for a two-week gig at The Trip in West Hollywood. It was timed to coincide with Andy’s exhibition of  “Silver Clouds” (mylar pillows filled with helium) at the Ferus Gallery. Unfortunately the helium leaked out during the course of the show and they slowly sunk to the ground. (Beginning December 19th you can see fully inflated ones at MoMA’s new exhibition, Andy Warhol: Motion Pictures.)

I can’t remember exactly how I met Warhol, but it was probably through Kurt von Meier, a zany teacher in the Art History department whom I met that summer through my mentor (and now fellow blogger) Carl Belz. In any case, Andy asked me to show him around Los Angeles, and even though I was a new arrival and didn't even have a car (I got around on a crummy motor scooter that kept falling over), I jumped at the chance.

It wasn’t as glamorous or as transgressive as one might think. There was a lot of hanging around the kitchen table because the house they rented, a place called The Castle, wasn’t walking distance to anything, and hardly anyone had wheels.  Sterling Morrison borrowed a motorcycle from von Meier and stayed at the Tropicana in the heart of Sunset Strip with a few of the others, but even he would hang out at The Castle. 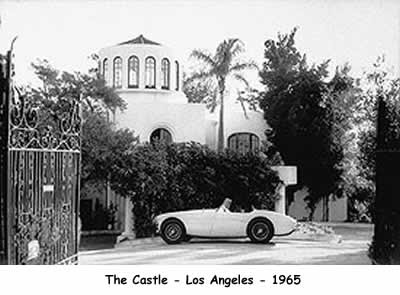 Here we were, at the height of the era of sex, drugs and Rock ‘n Roll, and as far as I knew there was nothing happening. Andy was asexual, although obviously a voyeur, but except for the show at The Trip there was nothing to even watch. (This was confirmed by Mary Woronov in a 2004 interview.) And as to drug activity, what little that may have taken place was behind closed doors. Andy disapproved of drugs and would even go so far as to hide them from Lou Reed.

The exciting part was going to The Trip to watch the performance Andy and the others put together — THE EXPLODING PLASTIC INEVITABLE. It was a multimedia event in spades. In addition to deafening music by the Velvet Underground and spectral singing by Nico, there were blinding strobes (in an interview Sterling said they wore sunglasses because of the strobes, not to be cool), a chaotic movie of Warhol’s Factory by Ronald Nameth projected behind the singers and overlaid with multiple slide projections (Andy ran one of them), and an S&M whip dance by Mary Woronov and Gerard Malanga.

It was pandemonium, especially in contrast to the kind of Zen, hippie light shows in California at the time. And it didn’t exactly go over well with the public, who sometimes booed, or with the critics, who wrote things like "The Velvet Underground should go back underground and practice."

Here’s a taste of what it was like; but keep in mind, it was a LOT louder than this video.
Among the celebrities attending opening night were John Phillips of the Mammas and Papas, Ryan O’Neal, Sonny and Cher (Cher left early; she was quoted as saying “It will replace nothing, except maybe suicide” — but Sonny stayed).

Memory is tricky. I could have sworn The Doors opened for the Velvet Underground, but it was Frank Zappa and The Mothers of Invention (Lou hated them and ridiculed Zappa). Jim Morrison, the Doors’ lead (and a recent UCLA graduate), attended the first few concerts and I think was influenced by them, at least to the extent of adopting Gerard Malanga’s tight black leather pants and the Velvet’s droning sound. The Doors were going to open for The Velvets after the third night, but they never got the chance because the Sheriff's Department shut The Trip down for suspected drug use and disturbing the peace. That wouldn’t have bother me — I never liked the Doors much. I thought they were too pretentious. My passion then was Motown — still is. But lucky for me, according to union rules the Velvet Underground had to stay in Los Angeles to be paid, so I got to hang out with them (when I wasn’t busy — I was still a graduate student) for the full two weeks.

Andy wasn’t the easiest person to talk to — he was very shy, and his lack of affect could be disconcerting. He was even more difficult to talk to during this period because he was going around tape recording everything anyone said to him. It’s a little hard to have a conversation with a microphone in your face. (Some of these verbatim transcripts eventually became his “novel,” a, A Novel — a book that makes so-called realistic dialogue seem artificial in comparison.)

Besides Andy I mostly talked to the beautiful, sultry, Mary Woronov. She was an actor in several of Andy’s movies including Chelsea Girls (she also starred in Eating Raoul).  Her role with the Velvets was to do a sexy whip dance with Gerard Malanga ( I only saw him at The Trip). In many ways she was the complete opposite of Nico (aside from both being beautiful): she had a dark complexion, dark brown hair and always wore black, whereas Nico had a pale complexion, blond hair and wore all white clothing; and Mary was a warm, friendly person — not at all the ice queen. (I think I may have been in love!) I also spent time with Paul Morrisey (Warhol's business manager), Maureen “Mo” Tucker (a boyish innocent, and a creative drummer) and guitarist Sterling Morrison when he was around. I hardly ever saw Lou Reed (who spent a lot of the time upstairs stoned) or Nico (who was impossible to have a sane conversation with in any case).

One of the most memorable occasions was a party at the Brentwood home of movie director Mark Robson.  Andy was a great fan of Robson’s movie Peyton Place and was dying to meet him. Via UCLA, I was good friends with two of his daughters, Judy and Martha, and they arranged the party. Again, it wasn’t all that glamorous (although it was the first time I tasted good wine). I don’t think there were movie stars there (not that I can ever recognize them when I see them). No one mentioned seeing any; and it wouldn’t be Mr. Robson’s style in any case. Andy talked to Mr. Robson about Valley of the Dolls, a movie he was working on, and Mr. Robson, who was one of the great Hollywood directors, and a really nice, straightforward guy, kept suggesting kooky ideas for movies. Warhol, in his hesitant, whiny manner, took me aside and told me he didn’t think Mark Robson understood what he did.

The climax of the evening took place when some drunk got belligerent and grabbed Andy. I put my arm between them, and a couple of the Velvets (I don’t remember who) pushed the guy into a chair and stood over him. Andy whimpered to me “I don’t like this party. Can we go somewhere else?” So we left.

The other indelible memory was our trip to, of all places, Disneyland. We all piled into a van and drove to Anaheim (about an hour away). The main topic during the trip was if we’d be allowed in because Disneyland had just refused entry to some famous person who didn’t comply with their strict dress code. The Velvets were convinced that their long hair and black New York clothing would exclude them. I really think they were disappointed when they got in — until, that is, they actually went inside. Then all the bored, sophisticated pretense of Sunset Strip went by the wayside. They were really excited by the place.

Paul handed out money to everybody, including me, for food and rides. I made the mistake of going on the Matterhorn (sort of a tame roller coaster ride) with “the boys” who sang the Mickey Mouse Song at the top of their lungs while trying to tip the car off the rail. Andy didn’t go on any of the rides. I think he was (justifiably) afraid. He’d find some place to sit, drink orange juice (he must have lived on orange juice; I never saw him consume anything else) and watch us. It was like dad (or “Father” in the sense of a priest) watching his flock of twenty-somethings having fun at Disneyland.

Great story!Thanks for sharing your memories.
The Castle is going to be featured in Sophia Coppolla's next movie "Somewhere".

An afternoon at the Ferus. . .

One of the pillows drifted out the frontdoor of the gallery and slowly ascended into the LA smog over La Cienega Blvd.
I turned to Andy and said, "POP!"
Andy turned to me and said nothing.

Charles: Great "trip" back in time. I remember you telling me later that watching over the Velvets was like taking care of a bunch of children. I remember, too, a visit to the Castle when Kurt and I were going to talk with members of the band, including Andy, in connection with our history of rock--yeah, sure, that was going to happen, right? Not a chance. Everybody there was in their own world. But thanks for the memories, well told.

Both Ron and Carl mention the lack of response,and it was my experience too. Andy said if you asked Nico a question you'd get an answer an hour later. Same was true of most of them -- if you got an answer at all.

I just read something in Warhol's book, "Popism," that directly relates to Ron's comment: "...they [the pillows] meant something special to me: it was while I was making them that I felt my art career floating away out the window, as if the paintings were just leaving the wall and floating away."

It has taken a lifetime for me to realize your point above.
I try to remind myself of this every day.
Fun story.