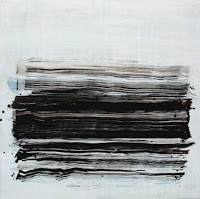 Tom McGlynn
Posted by Tom McGlynn at 12:30 PM No comments: 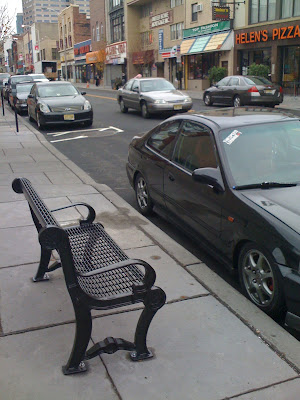 The studio tour has packed up and moved out after a loaded weekend that has left a lot of us Jersey City art folk in fallout mode.  This year's installment had no large venue to host multiple group shows (unlike the huge unfinished space rented from Canco Lofts last year) so seeing a good number of artists was a challenge, and since show descriptions weren't included in any of the accompanying press even figuring out which sites looked promising was a feat unto itself.


That's the (relatively) objective part.  But the reason it's taken me so long to get something posted about the event is that besides the standard cliches I just don't know what to say.  The JC Studio Tour is (diction fails me)...weird.


I wrote an article for JCI on the first Art Fair to take place in Jersey City (in conjunction with the Tour), and it got me thinking--what exactly is the point?  Most of the venues in this year's event were not artist studios, rather alternative exhibition spaces in people's houses, garages, or vacant condos.  I didn't see one working studio during my rounds of 20 some stops, but because there weren't any descriptions about the venues I can't really be certain how many there actually were--and that's a huge problem.


Part of the reason why artists didn't open up their work spaces might be because there are few people who have dedicated studios--Jersey City doesn't have much in the way of artist buildings, and it's kind of awkward (though cool) to traipse through someone's house in order to get to the room in which they make art.  It may also be that the Tour has gotten large enough to attract artists who don't live and/or work in Jersey City (I talked to artists from Hoboken and Bayonne) who import their work to vacant spaces.  For whatever reason, there are fewer and fewer actual studios on the Tour and more and more alternative exhibition venues.


This isn't a bad thing, but, on a critical level it has led to growing pains.  Studio Tours are generally community-centered events where artists demonstrate how they work to visitors who might not know that much about art in order to educate the public and replug culture into neighborhoods.  The Gowanus (Brooklyn) Studio Tour is a great example--their mission: "to provide the public a unique opportunity to visit and engage one-on-one with working artists for the purpose of gaining a broader appreciation of the various types of visual art media", and that's what they do.  The main focus of the event is not selling work, but selling the idea and passion of creation.  It's like the "making of" feature on a dvd.


On the flipside, many artists who participate in the JC Studio Tour are looking to sell or get noticed, not necessarily to teach.  That's why there aren't demonstrations and even people who have accessible studios don't often open them up; they prefer to put their work in shows where they have a better chance of being seen.  The only problem is, the artists aren't selling much, and the non-artists aren't coming out in force.


The JC Studio Tour is in between and something's got to give.  Artists don't know what to expect or how to publicize, and content-wise, just about anything goes--which has some bailing out (I'll expand on this later).  Visitors have to shoot blind picking what to see, leaving people pleasantly surprised (at best) and disappointed (at worst).  What is the Tour?  What does it aspire to be?  That's for ProArts and the City to decide, but I really hope these growing pains will ultimately lead to a more focused, purposeful, and ultimately successful event.


For the record, I think either approach (or even a mix) would be great--as long as the events were well-publicized and documented so people could actually make educated choices about what to see.  And Hudson Reporter: either publish descriptions of show venues, minimize typos and listing errors (yikes), or move over and let someone else do it.

Update: About an hour ago Nj.com basically published the museum's press release straight.  Way to go journalists who give themselves by-lines for reproducing other people's text.

I just got an email from the Jersey City Museum inviting me to tonight's preview of the "Jersey City Art Fair at the Beacon", an event apparently aimed at collectors who might be put off by the traditional studio tour slog from venue to venue (understandably- it's supposed to rain).  Since this is the first real art fair in Jersey City (indoors at least) I'm curious how it's going to come off--especially because this is the only concrete PR I've read about it.


Many artists I've talked to who participate in the annual Tour have said they do it just to get their work out there and show the community what they're up to--not in the hopes that they'd sell a piece.  Part of the reason many have written off sales might be because most Jersey City arts events are billed as local opportunities for community building rather than opportunities for people to view (and buy) works of art.  Just take a look at the democratizing language used on the ProArts website:

"All events are free and open to the public and there is truly something for everyone. The Studio Tour unites Jersey City's artists, art groups, galleries and more to create an outstanding weekend for all to celebrate our talented and vibrant artistic community."

Jersey City doesn't have its own collectors market and buyers haven't exactly been flocking in to purchase pieces from artists based here, but it looks like the Jersey City Museum, along with Victory Hall and JC Cultural Affairs (event sponsors), are trying to change that.  Or at least, they're changing their language, billing this event as an opportunity to: "mingle with nationally and internationally recognized artists, curators, gallery owners, and the arts community".

It's an important start, and I'm glad to see the studio tour evolving to potentially support what could become a true Jersey City art market...but six hours notice is kind of short.  It will be interesting to see who shows up.

"The Jersey City Art Fair promises to be a wonderful opportunity for serious collectors, art connoisseurs and the general public. This event allows everyone the chance meet new people and to discover latest developments in contemporary art. It's not to be missed!"

Posted by Irene Borngraeber at 4:05 PM No comments: