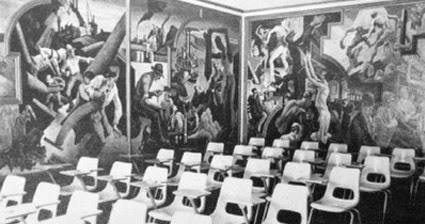 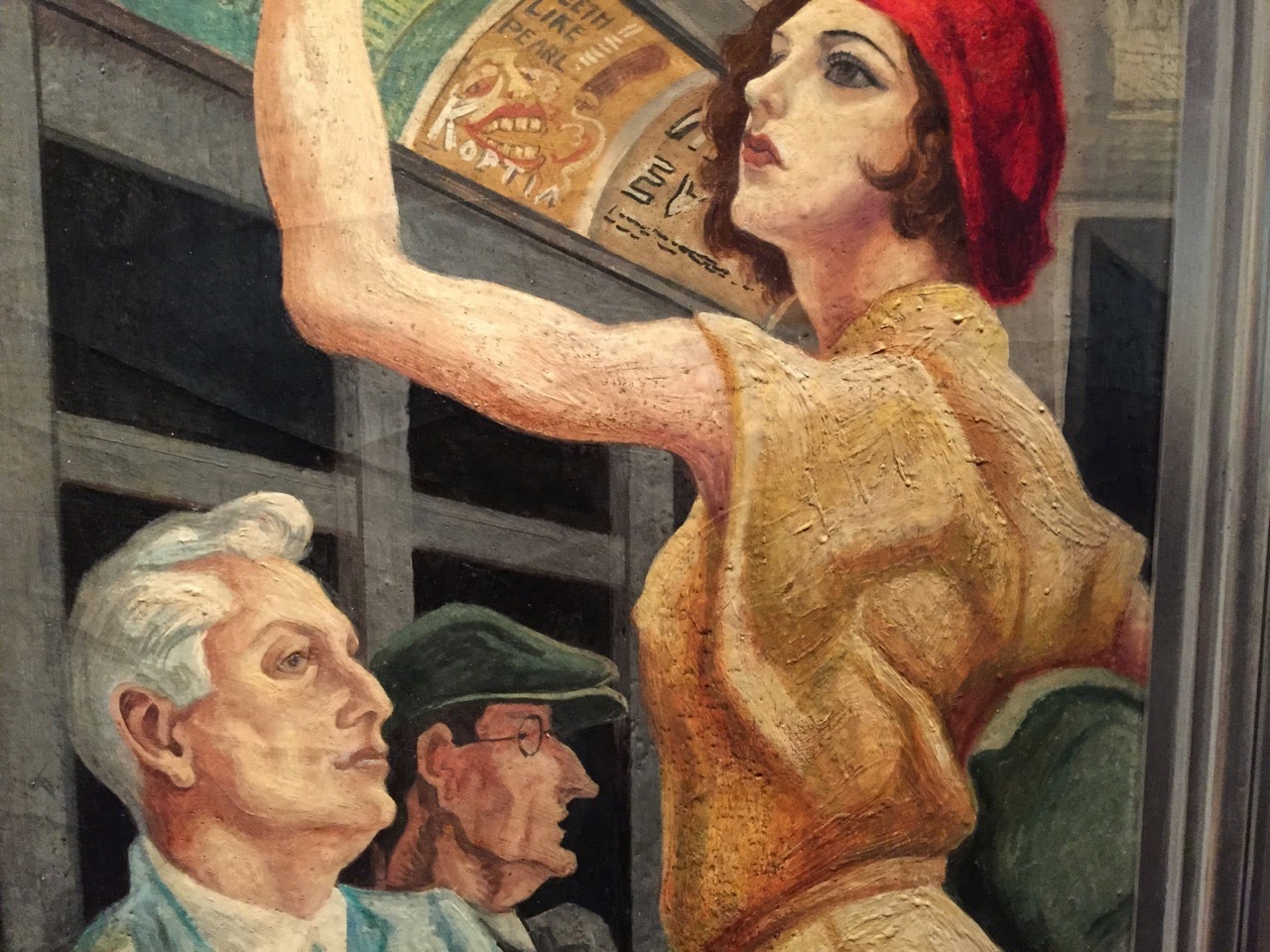 After the exhibition, the mural will be re-installed in a permanent location, appropriately near the Met's other period rooms.
Posted by Charles Kessler at 4:28 PM 6 comments:

October is the beginning of the art season, and this year it opened with a bigger bang than usual. Here are the high points since my last post on October 10th.

MATISSE'S CUT-OUTS
I may as well begin with the best: Henri Matisse: The Cut-Outs at the Museum of Modern Art. To give you an idea of the impact of this show, at the opening MoMA had eight or so full bars scattered around the ground floor, and they were practically empty for the first hour. Free booze and everyone would rather be upstairs looking at the art! I've also never been to a MoMA opening where everyone was smiling – the joy derived from these cut-outs is palpable.
I don't have anything to add to my post on the cut-outs exhibition when it was at the Tate, London, other than to say seeing MoMA's newly restored Swimming Pool covering a large room and hung using map pins, the way Matisse hung them in his studio, reinforces my opinion that Matisse's late cut-outs should be experienced as physically present environments.
There is, however, a photo in the show I'm curious about. Does anyone know anything about the calligraphy hanging prominently among the cut-outs in this photo of Matisse's studio? I haven't been able to find out anything about it.

PICASSO
Not to be outdone by Matisse, even after death, there are THREE major Picasso exhibitions in New York right now. At the Metropolitan Museum of Art is Cubism: The Leonard A. Lauder Collection, (until February 16th). This is an exhibition of Lauder's promised gift to the Metropolitan Museum – a staggering eighty-one paintings, collages, drawings, and sculptures by the big four: Pablo Picasso, Georges Braque, Juan Gris and Fernand Léger.
And in the galleries are: Picasso & The Camera at the Gagosian on 21st Street (until January 3rd) – an exhibition any museum in the world would be proud of; and Picasso & Jacqueline: The Evolution of Style at PACE Gallery (until January 10th).

I've been seeing a lot of visually striking dances lately. Not just dances with props that have nothing to do with the dance (like Rauschenberg made for Cunningham), but sets that are integral to the dance. Among them are RoseAnne Spradlin's dance g-h-o-s-t c-r-o-w-n at New York Live Arts;
Gisèle Vienne's Kindertotenlieder, also at New York Live Arts, where the dancing was minimal, and the set predominated;
and The Shua Group's, Steel Meeting with percussionist Sam Sowyrda, performed in a former metal-working garage in Jersey City. A final performance will take place November 9th at 3pm.

Also in Jersey City was Your Move, an ambitious modern dance festival produced by Art House Productions and the choreographers Meagan Woods and Morgan Hille Refakis. This was their fifth year, and with dances by 24 different choreographers, it was bigger and better than ever.

JERSEY CITY ART AND STUDIO TOUR
The Jersey City Art and Studio Tour has very few artist studios in it anymore; it's mostly group art exhibitions now. There were, however, a few impressive studios on the seventh floor of 150 Bay Street (the headquarters of A&P supermarkets in the early twentieth century), where there are still some low-income artists' spaces in the sadly, pretty much defunct, Powerhouse Arts District.
The group shows I saw were mostly miscellaneous collections of art with no particular point, which is fine, except not very interesting. The shows I liked best had clear themes, such as Whisky Rebellion at Village West Gallery (until November 21st).
(Whiskey seems particularly hot right now – a lot of the studios at the Greenpoint studio tour offered whiskey; it was provided at some Bushwick gallery openings; and they passed around a bottle of bourbon at Ghost Quartet, a recent play at the Bushwick Starr theater.)

And there were two other well-focused theme shows, both curated by the Curious Matter Gallery, called OBSOLESCENCE – one in their intimate Downtown gallery, and one at Art House Production's beautiful new space in Journal Square (both open until November 30th).
BROOKLYN
My favorite gallery exhibition in the entire city – until Gagosian opened Picasso & the Camera – was a large-screen video by Ragnar Kjartansson featuring the Brooklyn indie band, The National, at Luhring Augustine's Bushwick gallery.
It's a simple idea, but surprisingly affecting. The National played the same 3½ minute song continuously, over and over, for six hours, before a live audience at PS 1. They are really good, professional, dedicated musicians, who have played together for 15 years, and they interact with each other and subtly vary the sad song which begins:
Sorrow found me when I was young
Sorrow waited, sorrow won
Sorrow they put me on the pill
It's in my honey, it's in my milk

You can find the full lyric here, and there are several short videos on YouTube from the original concert here, but none of them sound as good, or are as beautifully filmed and edited – or  are as moving and intense, as the one at Luhring Augustine. The last hour (from 5:00 - 6:00 at the gallery), when the band is clearly getting tired but is still very focused on the song, is moving to the point of tears. See it if you can; it'll be there until December 21st.

Exchange Rates
Exchange Rates, or what the organizers referred to as "The Bushwick Expo," was an international affair involving about 20 Bushwick galleries that exhibited local art along with the art of more than 30 galleries from all over the world including Zürich, Seattle, Paris, Beijing, Glasgow, Birmingham, Berlin, Manchester, and Los Angeles, among other cities. In addition to the exhibitions, there were talks, workshops, panel discussions, performances -- and a lot of partying.
And it was an international effort, conceived and produced by Paul D'Agostino of the Centotto Gallery and Stephanie Theodore of Theodore:Art, both from Bushwick, along with Karl England, Ben Street and Charlie Levine – all from from Sluice__,  a London-based art organization.

I was pleased to be invited to go on a bus that travelled to the galleries – especially pleased since it was cold and windy that night, and the galleries were spread out. If I had to do it on foot, I would only have been able to see a fraction of them.

Brooklyn Performance Combine
This extravaganza, also produced by the preternaturally energetic Jason Andrew of Norte Maar, took place at the Brooklyn Museum's vast Beaux-Arts Court on November 1st.  It was a two-hour mashup involving 5 poets, 10 painters and sculptors, and 9 dance companies and musicians.

Paintings were paraded around (sometimes it reminded me of fancy auctions);
while music played;
and dancers performed.
To some degree, the inclusiveness of this event was a response to the Brooklyn Museum's exhibition Crossing Brooklyn: Art from Bushwick, Bed-Stuy, and Beyond, and the Museum's claim to be exhibiting “the 35 hottest artists from Brooklyn.” The Brooklyn Museum doesn't show nearly enough Brooklyn artists – inexplicable since they are otherwise very Brooklyn-oriented, and Brooklyn is one of the hottest art scenes in the world right now.  For them to come up with such a limited exhibition after years of neglect is insulting. (One of the paintings paraded around during the Brooklyn Performance Combine event was a painting by Loren Munk that listed about a hundred important Brooklyn artists who were not in the museum show.) And frankly, I wasn't impressed with most of the work that was included.
Posted by Charles Kessler at 11:42 AM No comments: