Not one Bushwick gallery closed since my last update, two changed their names (Bogart Salon became ArtHelix, and Weeknights became Associated), and five new galleries opened — making an amazing total of forty-three galleries now. Here is a brief description of each of the new Bushwick galleries:

AuxiliaryProjects
2 St. Nicholas Ave., #25 (at Jefferson), Brooklyn, NY 11237
(917) 623-8374 or (917) 805-7710 (Sometimes you need to call to be let in.)
Email: auxiliaryprojects@gmail.com
Hours: Saturday and Sunday, 12 – 6 pm, and by appointment.
Auxiliary Projects is a very small space run by two smart and talented artists, Jennifer Dalton & Jennifer McCoy. The gallery has a unique and admirable focus. They only do solo shows of artists that have been working for a long time but who are under-represented. And they are committed to showing some work in every exhibition that sells for under $300. They say that they want to “facilitate the production and distribution of art that can be owned by the non-wealthy, a kind of entry point into the art world.”

Harbor
17-17 Troutman #258, Queens, NY 11385 (The numbers on Troutman change in Queens, the gallery isn’t as far away as the address suggests.)
(347) 460-7360
Email: info@harborbk.com
Hours: Saturday and Sunday, 12 – 6 pm, and by appointment.
Harbor is another of Bushwick’s many artist-run galleries dedicated to exhibiting and supporting emerging artists. They are in the same building with three other galleries: Regina Rex, Parallel and Bull and Ram.

Schema Projects
92 St. Nicholas Ave, Brooklyn NY 11237
(718) 578-3281
Email: info@schemaprojects.com
Hours: Friday, 1 — 5 pm; Saturday and Sunday, 12 – 6 pm, and by appointment.
Email Mary Judge at: info@schemaprojects.com
Scheme is dedicated exclusively to all forms of work on paper — the first gallery in Bushwick to do so. They share a storefront space with Blonde Art Books.

TSA (Tiger Strikes Asteroid)
44 Stewart Ave, #49, Brooklyn NY 11237 (above Flushing, near Wyckoff)
Phone: (347) 746-8041
Email: newyork@tigerstrikesasteroid.com
Hours: Saturday and Sunday, 12 – 6 pm, and by appointment.
TSA has ten members, all artists, and is related to Tiger Strikes Asteroid in Philadelphia. Their focus is on emerging artists.

Wayfarers
1109 Dekalb Ave, Brooklyn, NY 11221
Hours: Saturday and Sunday, 12 – 6 pm, and by appointment.
They don’t have a phone number or email address listed — but they have a good Tumblr blog.
Posted by Charles Kessler at 3:52 PM No comments: 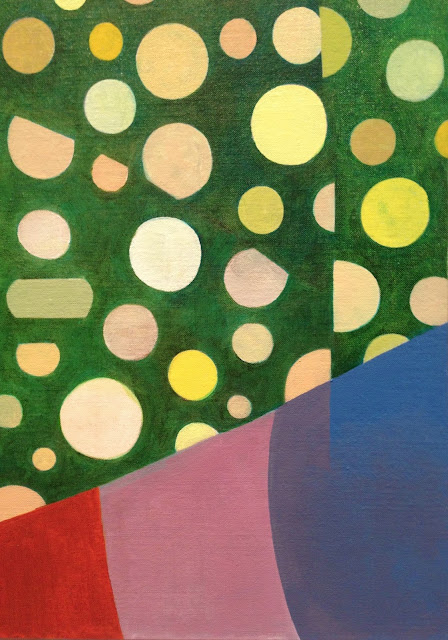 Riffs and tricks in themselves mean nothing, of course, but Nozkowski uses them to set up delightful, intimate, self-contained worlds that are a joy to behold.
Posted by Charles Kessler at 5:23 PM 1 comment:

Once More With Helen

(Writer’s note: The exhibition of Helen Frankenthaler paintings from the 1950s currently at the Gagosian Gallery on 21st Street naturally triggered memories of the Frankenthaler exhibition I did at the Rose Art Museum in 1981. I described the curatorial development of that exhibition in one of my Curatorial Flashbacks here on Left Bank a couple of years ago. What follows now is a brief description of my experience installing the exhibition, which turned out, not altogether surprisingly, to be a memorable collaboration with the artist herself. It was written in 1986 for a show celebrating the 10th anniversary of the museum’s patrons and friends program, which sponsored an annual major exhibition and included “Frankenthaler: The 1950s.” I have edited it slightly for the occasion.)
Helen Frankenthaler was a perfectionist. Her concern extended to every mark on every picture she made and to every detail of every significant project she engaged in relation to her work. Nathan Kolodner, a former student at Brandeis who became director of the Andre Emmerich Gallery, told me as much when we first discussed an exhibition of her 1950s work in the spring of 1980, and I learned it firsthand during the various stages that led to the completion of the show a year later. For me the culminating experience in the process was the installation of the 48 paintings and works on paper that comprised the exhibition, a selection of images that I had discussed at length with the artist, that I had visited in public and private collections throughout the northeast, and that I had come to feel I knew as well as the painter who made them. Armed with confidence, I spent a week arranging the pictures in advance of Helen’s arrival preceding the Saturday evening preview of the exhibition, though I didn’t actually hang them, for I anticipated she might suggest a few changes.

We walked through the show together, Helen looking quietly at the pictures, remembering them, for in many cases she had not seen them in the flesh since they left her hand more than 20 years earlier. Certainly she had not seen them assembled as she was seeing them at that moment, and I began to realize that what I assumed was a triumph--the full spectrum of her first decade of achievement--was also her vulnerability, a laying bare of her initial urge in the direction of genuinely ambitious painting. She admitted as much, acknowledging the nervousness she had felt on her way to the museum, but she also said she was deeply satisfied with how everything looked, and she congratulated me for my knowledge of, and sensitivity to, the work, asking in conclusion if I would mind if we rearranged a few pictures.
During the next three hours we moved every picture at least once, many of them several times, and a show gradually emerged that I had not seen before. While I had tried to indicate subtly the work’s chronological development, Helen pretty much discarded that textbook approach. Treating the entire museum space like a stretch of raw canvas and each image like a gesture to be expressed within it, she created an environmental painting right there on the spot. And a wondrous painting it was, allowing each part to stand on its own but at the same time generating among those parts an internal rhythm that revealed each more fully. I received a lot of credit for that installation. That I could not accept it was fully compensated for by what I had learned in watching it happen.