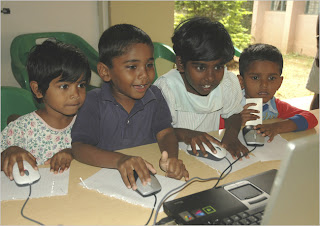 Students in Tamil Nadu, India, trying a Microsoft program that allows
multiple users on a single computer.
Interview with Marc Glimcher, President of Pace Gallery. He discusses the future of the gallery and the globalization of the art world.


The Whitney doesn’t just need more gallery space, it also needs great or even just good gallery space. … The idea that trustees have the final word on a museum’s design, considering all the atrocious buildings that have been erected in this country, is chilling. When will they ever learn to listen, and to people who have the right experience? They would get better spaces if they would loosen the reins.

Here’s a shocking idea: hire Larry Gagosian as a consultant. … Such an idea might occur to anyone who saw the Gagosian Gallery’s recent exhibition of a mere four sculptures by Alexander Calder, which unfortunately closed on Saturday. It was a heart-stopping, art-loving show that rewired and strengthened both the sense of Calder’s greatness and one’s own personal ability to see art.


Years ago a language like Cimbrian, a Bavarian dialect today preserved by just a few hundred speakers in northern Italy, would have been doomed to extinction; now Cimbrian speakers, according to a recent German newspaper article, turn out to be getting their own online newspaper and television show. The language is being sustained by the same global forces that might promise to doom it.

...The downside of this democratization is how every political niche and fringe group has found a culture via the Web to reinforce its already narrow views, polarizing parts of society despite the widened horizon. Neo-Nazis across borders now bond around cultural artifacts available over the Internet.

The Guardian, Arts funding 'significantly safer under Tories', says shadow minister. Can you imagine politicians in the USA fighting over who would be best for the arts?
The claim comes as the Tories launch their arts manifesto, laying out what Hunt in an interview with the Guardian calls a set of "extraordinarily radical" policies "that could mean that the arts are getting substantially more funding at the end of a first term of a future Conservative government than they are at the moment".