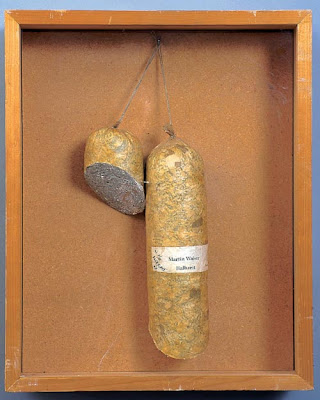 Dieter Roth. Literaturwurst, 1968. Book of cut-up novel, water,
gelatin and spices in sausage casing, 20 11/16 x 16 3/4 x 4 ¾ in.
98Bowery.com
This site is Marc Miller's autobiographical and historical documentation of Downtown New York art and music from 1969-1989. It is a must read particularly for anyone interested in the New York punk art and music scene in the 1970's. In addition the site has just re-published (in an up-dated internet version) the 200-page catalog documenting the first five years of ABC No Rio, and the larger artistic environment of the times (like Colab, the Real Estate Show and Lower East Side Poetry) that Miller wrote it in 1985 with artist, writer and co-founder of ABC No Rio, Alan Moore.

In Mexico, artists can pay their taxes with artwork - USATODAY.com
Not everyone can pay with art. Participants must register with the Tax Administration Service, Mexico's version of the Internal Revenue Service, by submitting a body of their work to the jury and proving they have shown or sold artworks.

Currently Giving Her Show Away: Chauney Peck | Slog | The Stranger, Seattle's Only Newspaper
She does hope for an "offering" in return.
Posted by Charles Kessler at 11:19 AM