One of the great treats of the MoMA Matisse show is the opportunity to spend time with Matisse's Bathers by the River and then hurry downstairs to compare the experience with Picasso's Les Demoiselles d'Avignon -- two of the greatest paintings of the twentieth century, and two extremely different paintings and experiences. It makes me want to take back all the bad things I said about the Modern ... naaah.

In many ways the competition between Matisse and Picasso was like the rivalry between the younger, hot-blooded, passionate Michelangelo and his older, cooler rival, Leonardo. The 36-year-old reserved and self-assured Henri Matisse created an enormous controversy with his Le Bonheur de Vivre (The Joy of Life), 1905-6 (not included in the show). His first dealer, Berthe Weill, recalled it was greeted with "an uproar of jeers, angry babble, and screaming laughter," when it was shown at the Salon des Indépendents in 1906.

Matisse, Le bonheur de vivre, 1905-6, Oil on canvas.
The Barnes Foundation. (5' 10" x 7' 11")
The young Turk Picasso, only 27 years old at the time, set out to one-up Matisse (and himself, as it turned out) with his Les Demoiselles d'Avignon. In the 1907 Salon, Matisse exhibited Blue Nude: Memory of Biskra,  whose radical distortions, and perhaps also the blue color, so annoyed Picasso that he was driven to make his Les Demoiselles even tougher.  (The two Matisse paintings were bought by the Steins, and, to stir up trouble, they made sure Picasso saw them in their house.) 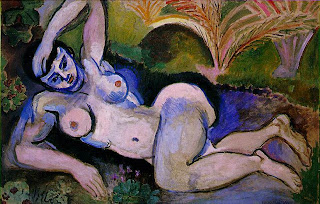 Henri Matisse, Blue Nude: Memory of Biskra, 1907,
The Baltimore Museum of Art, Baltimore, Maryland (36 1/4 x 55 1/4 in)
Matisse answered back with his very strange Bathers With Turtle. 1907-08, Museum of Modern Art (70 1/2 " x 88").
Picasso pushed Cubism in new directions, and Matisse responded with his own take on Cubism with, among other works, Bathers By The River, a painting he began soon after Les Demoiselles and one he worked on intermittently for nine years. 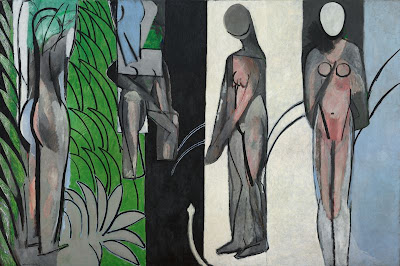 Henri Matisse, Bathers By The River, 1916, Art Institute of Chicago,
(approximately 8 1/2 feet high by almost 13 feet wide)
Pablo Picasso, Les Demoiselles d'Avignon, 1907,
Museum of Modern Art (8' x 7' 8")
In many ways the two paintings are as different as can be:
It’s also the difference between Pollock and DeKooning on the one hand, vs. Rothko, Newman and, to a lesser extent, Still (who falls more in the middle), on the other. The Abstract Expressionists were very familiar with Les Demoiselles because in 1937 the Jacques Seligman & Co. art gallery in New York City held an exhibition titled "20 Years in the Evolution of Picasso, 1903–1923" that included Les Demoiselles; and of course the Museum of Modern Art acquired the painting (for $24,000!) soon after.
Less known is that Matisse’s Bathers was also very familiar to the Abstract Expressionists. Clement Greenberg reported (Art & Culture, p. 233):

Matisse's huge "Bathers by a River" of 1916—17, now in the Chicago Art Institute, hung for a long time in the lobby of the Valentine[-Dudensing] Gallery, where I myself saw it often enough to feel able to copy it by heart.

I haven't been able to find out exactly when that was, but it was sometime beginning in the thirties and ending when the Valentine-Dudensing Gallery closed in 1948. So the painting was there early enough to be influential on the Abstract Expressionists. And like Picasso and Matisse, the competition between the Abstract Expressionists made all their work greater.
Posted by Charles Kessler at 2:06 PM