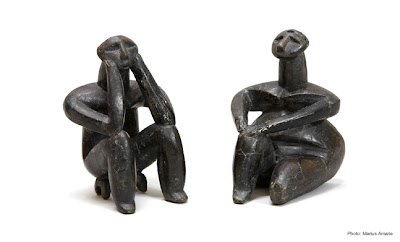 “The Thinker” and Female Figurine from Cernavodă, Fired Clay,

Now at the Institute for the Study of the Ancient World.

I returned from 70-degree California to a snow and art-bound New York. First there was the ludicrously massive Armory Show (377 booths on two piers!) and two other art fairs -- Pulse and Independent (my favorite); then I caught up with the Chelsea Galleries and Edward Winkleman’s #Class; then the New Museum and Jeff Koons’s poorly installed (and named) Skin Fruit; the Lower East Side Galleries (twice -- with different out-of-town friends); the American Academy Invitational (I’m pleased to report John Lees was awarded a purchase prize); and an Art House opening in Jersey City.

No more art for the rest of the week -- that’s it, really. Oh, I forgot, I’ll be near the Met Friday so I should see The Drawings of Bronzino -- and right near the Met is a show I heard was great called The Lost World of Old Europe: The Danube Valley, 5000 - 3500 BC (a great website, btw) at NYU’s Institute for the Study of the Ancient World (15 East 84th Street). But that’s really it. I can’t handle any more art. Aw, damn -- the Whitney is open for members late Saturday; I really should see the Biennial then, but that will conflict with Pro Arts's Eat Up. And everyone’s telling me how good the William Kentridge (another good website) show is at MoMA. Shit!

Posted by Charles Kessler at 3:47 PM