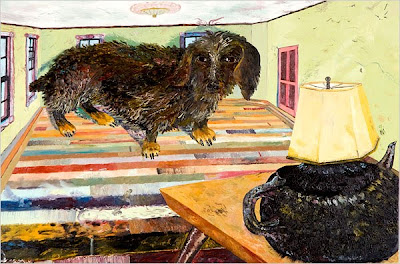 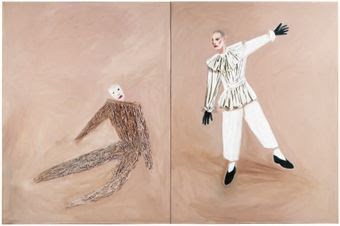 
Roberta Smith’s article on some recent painting It’s Not Dry Yet (NY TIMES March 26,2010) http://www.nytimes.com/2010/03/28/arts/design/28painting.html opens with some art world cliché- busting in her reference to the perennial false double bind of abstraction versus representation, specifically in reference to modernist and contemporary painting. In referring to Clement Greenburg and Donald Judd’s influence in reductive formal abstraction ,however, she reinforces an art historical canonical cliché. It is really no longer possible to look to those particular whipping boys as an accurate reference without acknowledging about half a century’s worth of baroque permutations of art, modern or post, that refutes that limited formalist stance. The argument of abstract vs. representation therefore becomes resurrected within its apparent refutation. To make matters worse, there follows, (In a Times website slide show), a collection of contemporary painters that appear mostly moderno- illustrative rather than representational and never mind the abstract. In viewing the slides I think back to the work of the painter RB Kitaj, or even the pop illustrators Peter Max and Richard Merkin.

In my most recent post, on the 2010 Whitney Biennial, I mentioned a pluralist time in the late 1970’s early 1980’s when the argument for figuration as viable vehicle for contemporary painting was being worked out by artists as disparate as Neil Jenny and Nicholas Africano. In Jenny’s work there was a nod to expressionist brushstrokes combined with pop culture symbolism like double Mig jets in a brushy sky or an faux illustrative Arcadian view through a mailbox slot / tank periscope. The irony of his work was both subtle and critical of the dominant culture at the time. Africano, who’s work has apparently sailed into the mists of fondness and regret that surround the shallow consciousness of the American art world, made quirky painted tableaux of modeling paste figures set in frames resembling mock proscenium stages. In these painted constructions fictional characters enacted banal scenes of domestic and sometimes political drama. Both of these artists found a way to revitalize the idea of representation at the service of contemporary thought. The pluralist period gave way to a less-subtle neo/ expressionist figuration movement that saw the rise of painters such as Julian Schnabel and Sandro Chia. These artists plundered art historical references in an attempt to ennoble their practice with a sense of historical moment and significance. While this is nothing new in modernist tactics, it did relegate the images to simply being armatures for the expression. It was probably what was most post- modern about this work, the awareness of a decal of figuration that seems to shroud our modern dislocation and relativist spirit.

The problem with most of the artists that Smith puts forth as interesting practitioners of representational painting is that they seem to take its decal figuration as the expression and not the vehicle. I have seen better, and typically more bizarre, syntheses of illustrative form and abstract content in contemporary Japanese graphic novels than in these examples. This is also probably why Murakami’s work feels annoyingly insincere to me in an art world context. Some genres seem to resist an art transformation, like graffitti did in the 1980's. The references to real illustration used by these particular contemporary artists don’t go far enough in their transformations from sheer illustration to art. The extent to which they might employ bravura technical skills with paint application and materials just serves to set up an (ironically) formulaic impoverishment of visceral expression.
Posted by Tom McGlynn at 4:44 PM

Thanks Thomas,
Florine Stettheimer does come up perenially as an example of a visionary figurative painter, kind of like a poster girl for sincerity in painting. The same happens with Henry Darger. The problem with most of the work Smith puts forth in the article is that it is neither good visionary nor interesting in its formal invention.

Not to go on, but I take the work represented and Smith's article to be about manufacturing persona, more or less using people like Darger and Stettheimer as templates. With Stettheimer, you have the aristocratic insider eccentric; with Darger the impoverished alienated eccentric.