I’m not talking about health care here, I’m talking (okay, writing) about three amazingly successful art events that took place in Jersey City in the last few months: Art House Production’s Snow Ball, Pro Arts’s Eat Up (both fundraisers) and the opening of Irene Borngraeber’s alternative space, The Distillery. Significantly all events were DIY; and all were organized by dynamic women. The fundraisers were triple triumphs: they were enjoyable community gatherings, successful financially, and significant art events. 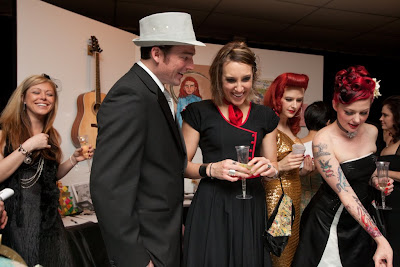 It was Art House Production’s fourth Snow Ball and, as usual, the dress was “Black Tie Creative.” People looked GREAT. Almost everyone dressed up (unusual in Jersey City) and some were “creative,” wearing everything from gathered newspapers to jelly beans to a toilet. There was some pretty good art on the walls too, including work by Jack Halpin, the Artistic Director of Art House. Who knew? 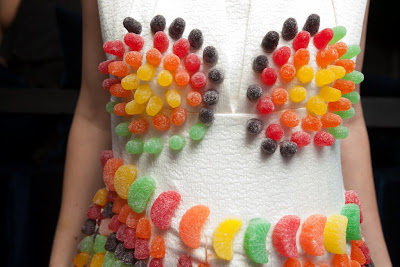 This was the first time Pro Arts organized Eat Up, an idea that came from the Brooklyn group FEAST (Funding Emerging Art with Sustainable Tactics). Basically people pay an admission fee and get a meal and a ballot to vote on various artist projects. The artists pitch their projects and the one with the most votes is awarded all the funds collected, minus whatever small expenses accrued. 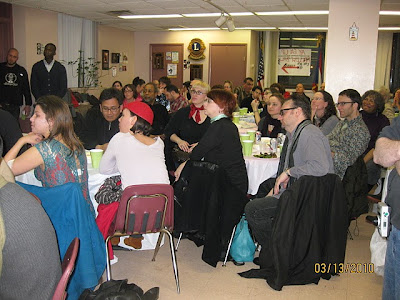 Pro Arts’s Eat Up: Listening to an artist pitch (Photo by Rebecca)

Fundraising events often lose money and burn out volunteers in the process. Not this one. Even though it took place on a brutally blustery night (March 13th) there was a large and enthusiastic turn-out. The artists were well prepared (and had some excellent proposals) and the voters took their job seriously. Plus the food was delicious: award-winning chili contributed by Made With Love (530 Jersey Ave), salad, great corn bread, beer, wine and desert -- all for 20 bucks.

Then there’s the awesome Irene Borngraeber. (I mean it literally -- I’m in awe of her.) She’s been in Jersey City for, I think, only about a year, and has accomplished so much my head spins. She regularly writes about art for many venues (including this blog); she was treasurer for all of the One Jersey City City Council candidates (I couldn’t handle the job of treasurer for just Dan Levin); she holds about 4 or 5 part-time jobs, she’s a good artist (check out her site: [ http://irenecreates.com/ ] ), everyone knows and likes her and she even talked her way into MoMA’s recent $5000 Armory Show fundraiser! And oh, she speaks fluent French.

In spite of my attempts to discourage her from even trying, she found a free space (owned by Palisade Wines, 401 Palisade Avenue), fixed it up, created an organization “dedicated to producing curated shows, arts programming, and innovative installations by artists of all stripes” and registered it as a New Jersey non-profit seeking tax exempt status. If the first show, “Splice: Worshipping at the Altar of Technology” (until May 1st) is any indication, Jersey City will have a first-rate alternative space: The Distillery 7 Hutton Street at Palisade Avenue in the Jersey City Heights.

Art House always does some really creative things - I love their approach to art, involving the community (local and global) and everything :)

Charles you are too sweet. Thanks for all the encouragement (or discouragement, rather)- yes we can get it together in JC! Now that the Distillery's opened I will come back to you with all the biting wit and unwanted arts commentary Jersey never asked for (after I redo my terrible website). Way to guilt trip me into writing more. hehe. Let's keep it going...and thank YOU for driving leftbank right along when I veered off into the bushes.