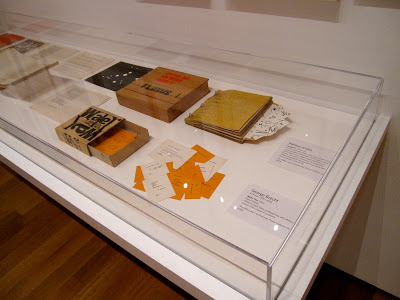 To a greater or lesser degree, the way a work of art is presented or installed affects its meaning. Recently I wrote on what I called “the Fluxus paradox” -- Fluxus art was originally casual and unpretentious but became just the opposite when it was collected by museums. That is, once such fragile work was carefully preserved and diligently protected by guards, it became precious and pompous.

Friday’s Times had an article by Holland Cotter on Marina Abramovic’s re-creation of her performances at MoMA:

The work and the sense of energizing newness it once radiated were, as Kaprow knew, the product of a particular time and culture. The recreated performances in MoMA’s show are similarly products of a milieu that once made them transgressive, poetic or simply gave them heat, but is now gone. And, through no fault of the performers, the pieces feel like leftover things: flat, dutiful; artifacts.

Similarly, I recently came across several replicas that Marcel Duchamp made of his Assisted Readymade, With Hidden Noise. The Philadelphia Museum of Art and the Nicholas Robinson Gallery’s exhibition of Don Judd’s collection (a must see, btw - 535 W. 20th) both display it on simple white rectangular pedestals with a glass cover. The Readymades were made to be handled (an object was placed in the ball of string and it makes a sound when rattled). Nevertheless, the works don’t suffer much with these installations -- perhaps a loss of immediacy at most. White sculpture pedestals and glass covers are such common displays that it’s unlikely anyone would think they are part of the work. 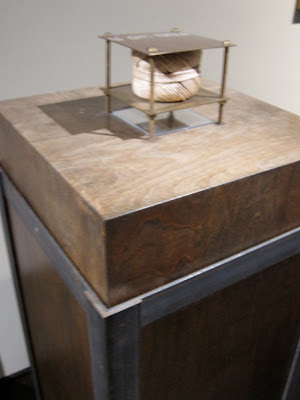 This is not the case with LACMA’s obtrusive installation -- an arty wood block with a decorative trim of steel braces, and, to top it off, a mirror under the work (presumably to see the word game Duchamp engraved on the bottom -- see below). Duchamp was still alive when LACMA acquired this piece. They could have consulted him on how it should be displayed, and maybe they did -- although it’s unlikely given the artiness of the display. I wrote, emailed, telephoned and asked in person for information about any installation instructions, and so far haven’t heard back from anyone. (The MoMA library was kind enough to research if Duchamp provided installation instructions for Fresh Widow, but they came up with nothing -- I haven’t heard back yet from the curatorial department they referred me to.)

Then there’s the inexcusably insensitive. The Santa Barbara Museum of Art, in an otherwise excellent show of California Art, defaced (that’s the best word for it) a classic resin Ron Davis painting. They velcro-ed it to a piece of plywood shaped to the painting and hung on the wall with hooks, rather than velcro-ing the painting directly to the wall as Davis intended. As a result the work cast shadows that interfered with the perspectival illusion. 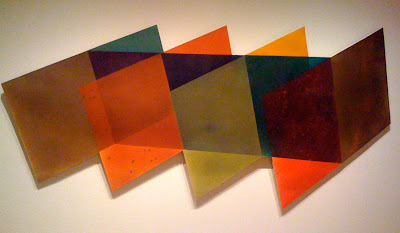 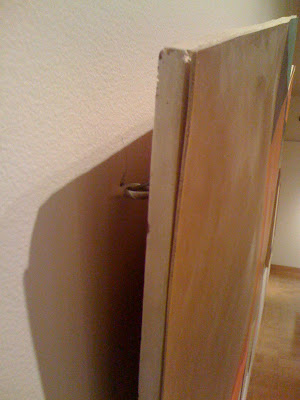 Posted by Charles Kessler at 10:12 PM