On The Culver City Gallery Scene

First of all, about half of the galleries aren’t in Culver City, they’re on La Cienega Boulevard, which is in Los Angeles. La Cienega, 30 - 40 years ago, was the main gallery street in LA, but that was a section of the street further north where the street is narrower and the neighborhood very upscale. This is a very different La Cienega -- a downmarket, wide, heavily trafficked street, and an unpleasant one to walk on.

Nevertheless, the galleries are close enough together to walk to all of them -- although no one in LA would do that -- they’d drive even if it’s just a few blocks. Most galleries have two entrances, one in front for the few pedestrians, and another for people who park in the parking lot in back (see below). Since most people park in the lot and enter through the back, there isn’t much pedestrian activity or street life.

The galleries that are actually in Culver City are more pleasant to stroll, not because there’s less traffic on Washington Boulevard, where most of the galleries are, but because the city of Culver City built a landscaped median strip down the middle of the street making the street less bleak, and easier and safer to cross. (BTW, what happened to the one Jersey City was supposed to build on Columbus Drive?) The city also did a lot with sidewalk lighting, landscaping and street furniture, to make gallery-going more hospitable.

And there are some surprises along the way: galleries that, from the outside, seem to be tiny, LES-type spaces, are spacious inside; and, near the intersection of Washington and La Cienega, the Los Angeles River flows -- with water in it for a change.

The galleries are airy, single-story storefronts with skylights and clean white walls -- more Chelsea than LES. I was hoping for a more cutting-edge scene, something like what I saw in Chinatown here a few years ago, but the Culver City scene is staid -- competent but unadventurous. I don’t think it was just a matter of timing, I had a good look in the storage areas of most of the galleries so I can be pretty sure they’re showing good, but ordinary work. Two shows I liked in particular were powerful, large, drawings by Shay Bedimus at Koplin Del Rio, and a revelation of a show at Cardwell Jimmerson, a gallery specializing in past Los Angeles art (and LA does have a significant art history). In this show the gallery and the artist, Lloyd Hamorol, reproduced work shown in 1966 at the Rolf Nelson Gallery in Los Angeles. 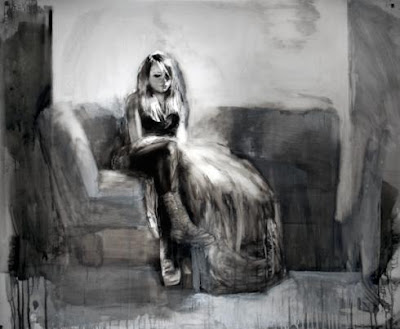 Unlike Chelsea, the dealers are friendly and eager to talk (to me at least, my friends were bewildered by it). And I learned a lot from them. Several complained that people in LA don’t buy art; a director of one of the best galleries, told me that only 30% of his sales are to people from LA, and that he sold more art to New Yorkers. Another dealer, after learning I'm from Jersey City, gave me a pass to the Pulse Contemporary Art Fair, one of the fairs concurrent with the Armory Show in New York. Now how often would that happen in New York?
Posted by Charles Kessler at 7:54 PM