No contemporary art for the CAA? 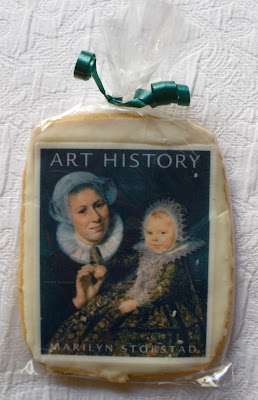 After spending the last five days session-hopping at the College Art Association conference in LA and trying to understand how this behemoth of theoretical knowledge treats the study of contemporary art, I'll be frank: academia has some major issues. This was my first CAA conference and, recently out of grad school and struggling to find my own publish-able blend of art history and journalism, I'll admit that I was floored by the thought of attending critical panels and debating with my former professors on the nature of art. I was warned by colleagues not to expect too much, but I was still almost giddy with anticipation as I made my way to the convention center and anxiously poured over the binder of session abstracts.

I came back, loaded with books, but disappointed. The College Art Association--the organization for scholars, professors, and teaching artists--had very little to say when it came to actual contemporary production. In fact, no one could even define the discipline (considered 1945-present in most colleges and 1960-present in others), let alone offer a proactive opinion on how the study of this "mystery topic" should be approached. Panelists on "Historicizing the Present..." and "What is Contemporary Art History" seemed to be more interested in talking about their own work than proposing solutions for the philosophical dilemmas involved in studying contemporary art--or answering the main question posed.

Within the canon then, contemporary art history is basically whatever the academic makes of it, and that frustrates me. I have read enough articles on Stella and 1950's pop artists to last me a long while, and have been waiting for something more, something different, something new to come out of academia. Instead of re-hashing the classics, why aren't art historians studying living artists, or taking risks writing about talented individuals who haven't been "made" yet? For me, contemporary study begins with an analysis of what's being produced now and culminates with putting this new method of working within the context of the larger discipline of art history. Analysis on current issues has to be different than those of the past, but that doesn't make it any less worthy of scholarly debate.

I wish those within academia would start taking risks, putting ideas out there that are different from the accepted (and anticipated) norms, instead of leaving the press to have its way with contemporary art while refusing to criticize fellow members of the academic club. I want to hear statements worth defending and historians really thinking about what it means to be a modern academic studying events that aren't yet--and may never be--historic.

I don't think this is revolutionary, yet creating a standard definition of contemporary art history as well as one for studies that are truly grounded in the present (they are, perhaps, two separate topics), doesn't seem to be on the horizon for the CAA: no one seems willing enough to challenge or potentially offend.

Photo: Marylin Stockstad's happy 80-something birthday cookie, given out at the conference bookfair. Cuteness from the reigning Queen of Art History 101.

Posted by Irene Borngraeber at 8:05 PM