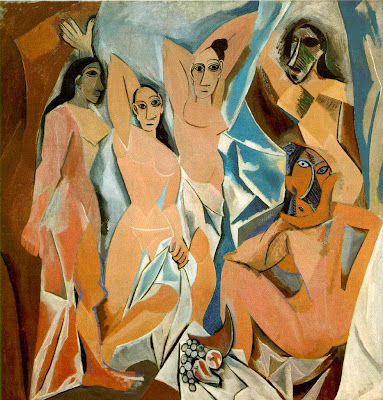 (Click on an image to enlarge it)
Since I wrote about Picasso's poetry, I've been thinking about his Les Demoiselles* at MOMA and the radical phenomenological change in the relationship between art and viewer this painting established.

One’s relationship to traditional easel painting is like an observer looking through a window into an imaginary space -- a space comparable to the fourth wall in theater. It's an imaginary space comfortably separate from our own. In the Renaissance and Baroque, even when the depicted space continued real space (Leonardo's Last Supper for example) we know we are looking in at a different, more perfect world -- a world separate from our own. Being absorbed in that world, even if the subject matter is charged with emotion or highly dramatic, is a private and intimate experience.

Modern Art since Les Demoiselles aggressively addresses us in our own space. Art is now part of our world (btw, one of the fundamental points of Marcel Duchamp's Readymades). Significantly, early studies for Les Demoiselles show Picasso originally included a sailor and a medical student in the brothel with the prostitutes. Eliminating them meant the relationship is not among the figures inside the painting but between the painting and the viewer.

Like the fruit in the botttom of the painting, the prostitutes indifferently display their bodies, looking neither at us nor at each other, but instead stare blankly out into our space. By the action of our looking at them, we are made uncomfortable participants instead of passive and detached voyeurs.

This is a tough, nasty painting (and that's a good thing). There is not an inch that we can relax in -- it just keeps coming at you, thrusting things forward into our own space with a raw violence that is still unnerving more than 100 years later.

I know this is basic stuff, and of course this is a gross over-simplification -- the history of art is much richer and more complicated than this. And also this has nothing to do with the quality of the the art. I'm just pointing out a change in the phenomenological relationship between art and viewer that I think is vital to understanding Picasso's radical import.

* Picasso always referred to the painting as "The Brothel," but his dealer softened it to "The Young Ladies of Avignon." Typical!
Posted by Charles Kessler at 4:21 PM