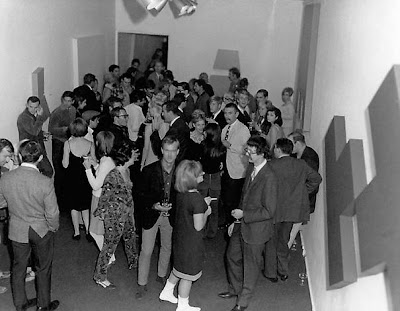 A friend of mine emailed me this photo from the home page of the Franklin Parrasch Gallery. I immediately knew it was Ron Davis’s work from the mid-sixties and I also easily recognized Ron Davis standing in the right foreground. But neither of us could place where it was. I figured because of the small space and the dressy clothing, it had to be some uptown New York Gallery. When I went by the Parrasch Gallery to see the show (more on that later) I was astounded to learn it was the Nicholas Wilder Gallery in Los Angeles.

The more I looked at the photo the more I remembered about the Wilder gallery and that time in Los Angeles. I was a student at UCLA’s Graduate School of Business and was in the process of transferring to the Art History Department (a story for another time). I was passionately interested in contemporary art and would get into intense arguments with my fellow students about such sophomoric things as “is there good and bad art,” or “the importance of the framing edge.”

I’d take a couple of buses (I was the only person I knew in LA without a car) to go to La Cienega Boulevard for the Monday night “Art Walks”. Eventually I met Nick Wilder who took me under his wing and taught me about contemporary art. He would pull out work from his back room and talk to me about it; he’d tell me about books and articles I should read; and he’d introduce me to artists, including a young student wunderkind, Bruce Nauman. He even took me and my wife to Laguna Beach once to meet John McLaughlin -- one of the high points of our lives in LA. And he introduced me to Ron Davis, who at the time was one of LA’s most famous artists. His work was on the cover of Artforum with an article by Michael Fried , and he showed with Leo Castelli.

Ron and I became good friends. I remember going to his home/studio in a scruffy part of LA, and later (when he became more successful financially) in Malibu where he had a house and later a studio designed by Frank Gehry (yet another story). He kept trying to talk me into becoming an artist. He said the way I wrote about art was the way an artist thinks about it. When I told him I couldn’t draw a straight line he told me that’s what rulers were for. We’d talk until 3:00 in the morning and, driving back very late (I was married and had a car by then) I remember telling my new wife that I wanted to be an artist and that if I wasn’t successful in five years I’d give it up. (That only lasted one year when I told her I couldn’t give it up successful or not).

Once, when Ron came by my studio and saw some drawings and tentative works on cheap paper I was doing, he told me if I wanted to make drawings I should continue doing what I was doing, but if I wanted to make paintings, make paintings. But the most important things I learned were from watching him paint. I learned that even the best screwed up, but really good artists (like carpenters) knew how to deal with their screw-ups -- including using them.

I’m writing this not just because it’s fun to reminisce (okay, that’s the main reason), but because I don’t think it’s possible for kids to have this kind of access and mentoring anymore. (And I haven’t even begun to relate all the other opportunities I had then.) I think the art world is just too big and too stratified, at least in New York and Los Angeles. Kids may be better off in a city like Philadelphia or Seattle where they might have more access, but access to whom? Would they be exposed to people of the ambitiousness, ability and knowledge, let alone generosity, that I was lucky enough to be exposed to? Artists have always gravitated to one city or another; I don’t think I’m being a provincial snob (although I am one) to say that the best artists (in the United States, anyway) want to be in New York or possibly LA.

And yet… and yet… young artists are so much smarter, talented, ambitious, hard-working and connected than I remember ever being. So who knows!!

Posted by Charles Kessler at 5:28 PM

What a great blog, Charles. This is the kind of priceless story -- high content! -- that begins to make blogging and social networking worthwhile.

Talk about generosity. I really like your impressions of Nicholas Wilder and Ronald Davis and I'm particularly thrilled with your description of meeting Ron, since I'm now married to the guy. Ron still never fails to amaze me with his rich stories and vivid anecdotes about the art world, past and current. There is a lot there to be remembered and taken care of. You have captured the best spirit of that time in your reminiscences of Nick, and of Ron. From all the artists and writers I know from that time, I gather there is today something precious and essential missing from the art world, and there are a lot of older artists who grieve this diminishment. I keep trying to analyze why this is so, or even understand what it means; but I can't really, because I'm a neophyte, and I wasn't there at the time. So I go back to what Ron has been saying for the past 20 years or so: "They've killed the golden goose." Which I think means the mysterious and cynical workings of the art market, with the help of the media, have skewed or muddied what truth and beauty in art really are, which affects its value and thus affects the artist. Further, there is no regulation of pricing nor best practices standards in any part of the art business, which has always appalled me because it can hurt not only fragile artists but decent dealers as well. Also, volatile, fickle trends in art fashion affect how viewers understand and accept art. Which all shows up in the vagaries of the auction market, which in my opinion is terribly overrated as a valuation device. I've seen people abuse it; they'll overlook Ron's fantastic new work to buy one of his older paintings at auction for a third of its value, and then flip it on the secondary market for a profit. This is very depressing for a living artist who has new work today and badly needs a sale. Perhaps 'twas ever thus; but my sense is that it has gotten worse over time much the way the economy has gotten worse: there is a disturbing disparity in perceived aesthetic quality; in monetary value; and in "artist value," measured by the respect and advantage it seems is given to collectors and institutions over the artist him- or herself.

All that aside, I consider myself simply very lucky to be able to closely watch the creative processes of one of our great modern artists, and to be a witness to daily despairs or thrills, breakthroughs or plateaus. No matter what kind of day I've had, when I go down to the studio to look at what Ron and Jeff (his studio assistant) have made, I am uplifted.

I do know that young people, including young artists, who come through Ronald's studio sometimes don't know what they're looking at, but many of them do. Because there are so many artists now, and because competition is thus fearfully high, it's a good day if these young viewers see the art as inspirational didactic and cultural quality, and not as something to steal, corrupt, or use in order to get someplace.

Three quotes now come to mind in closing, all of which Ron shared with me in one or another of his generous tellings. He told me Barnett Newman said (and I'm clumsily paraphrasing), "Older artists should encourage and critique young artists, and guide them in the understanding of abstract art." And, Ron told me that his teacher from SFAI, Jerry Hatosfsky, always challenged his painting students with the question, "What do you want out of it?" Finally, Ron told me something Nicholas Wilder said back in the '70s which, of all the things Nick ever said, I believe Ron considers the most valuable: "The whole of the art world is simply the artist, working alone in the studio, in the dark of the night."

To finish up my prior post, I think I got a little heavy and complaining there! but I think what I want to say is that yes, I agree: from what I've seen and heard, there was something wonderful happening in the art community back then (in the '50s, '60s, '70s) that is not happening now. Our fast-paced marketing oriented world has affected younger artists, whose goals seem different from those who started in the middle of the last century. Perhaps that is just the natural flow of things, but it makes me wonder where the real heart of modern art is now.

I would love to see more dialogue on this topic. Thank you for your postings!

CORRECTION:
Oops: I pushed the button before Ron had a chance to tell me that he doesn't remember the Barnett Newman quote at all (in my first post on Feb 2), so I may have remembered that bit from a book or periodical. Sorry Ron!

Love your blogging Charles! Who knew you were a Business Guy?