Los Angeles Art of the Sixties

The Los Angeles “Cool School” is getting a lot of attention lately. It's a loose group of about a dozen artists working in Los Angeles in the sixties, famous for very refined surfaces (“fetish finish” was one term applied to them) and very simple, minimal work that often dealt with light. It’s possible all this new interest was triggered by “The Cool School,” a 2008 movie, but maybe there’s something about the uncomplicated beauty of the work that’s refreshing today -- or most likely, it’s just a coincidence. Whatever, there are three or four places (depending on who is included in the “School”) showing this work now:

Franklin Parrasch, “Ronald Davis monochrome painting from the 60's.” Parrasch has focused on LA art of this period over the years, exhibiting Joe Goode, Ken Price, Peter Alexander, Billy Al Bengston and others.

And a show of the much under-appreciated artist of an older generation who usually isn’t associated with “The Cool School” but has some similar concerns, John McLaughlin at Greenberg Van Doren, recently review by Roberta Smith. I haven’t seen it yet, but he’s one of my favorite California artists.

When I lived in LA, I didn’t much care for “The Cool School.” I thought it was too provincial and kind of thin. And even when the work had more substance (Irwin and Kauffman), I felt the miraculous beauty was a little cheap. I mean, of course you're going to be amazed by Irwin’s floating disk -- very Zen and all. I was also put off by the artists (not Irwin) who, for the most part, acted like anti-intellectual, macho, art stars. (One of these artists once told me, “I don’t look at art, I just make it.”) I wanted something more substantial, tougher both intellectually and emotionally. For me, at the time, the best artists in LA (Diebenkorn excepted -- who wasn't really considered an LA artist) were Davis and Charles Garabedian (a topic for another post). (LA also had an exciting art-architecture scene inspired by Frank Gehry.) 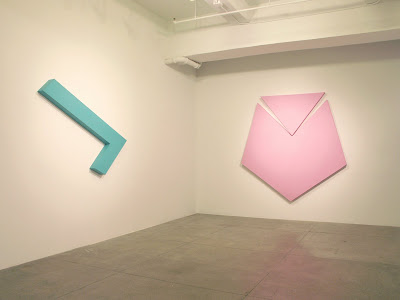 I never thought of Davis as fitting into the LA “Cool School,” but the Parrasch show changed my mind. Not that I now realize Ron was an anti-intellectual jerk and his art was thin. Not at all. I loved this show. Davis wasn’t particularly friendly with these artists, and certainly wasn’t considered to be part of “the cool school,” but the sensual silky surfaces of this work, and the ethereal color -- still gorgeous 45 years later -- make me think there is some connection. Of course Davis went in a very different direction -- to illusionistic work done in 3-point perspective -- work just hinted at from the two point linear perspective of this work. 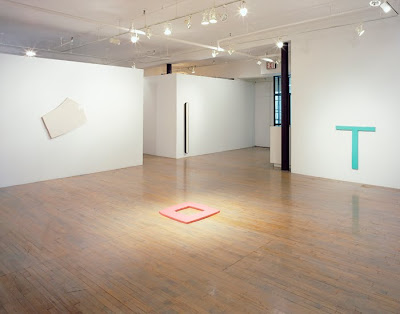 Richard Tuttle’s “Constructed Relief Paintings” of 1964 and 1965 were made about the same time as Davis’s paintings, and they have a lot in common. Tuttle, like Davis, worked on relatively thick stretcher bars; they both made shaped paintings; they both applied many coats of paint to get the surface just right; and both used peculiar colors -- colors you can’t really put your finger on. Tuttle even showed at Nicholas Wilder, Davis’s gallery, in 1969. Of course Tuttle’s work was more concerned with the hand-drawn edge of the reliefs and Davis, as I noted, was concerned with 2-point perspective, but there was still a lot in common. Most likely, Davis and Tuttle were both influence by Frank Stella’s shaped paintings.

An interesting side note: the Peter Freemen gallery in Soho had an excellent show of Tuttle’s “Constructed Relief Paintings” four years ago, and I remember trying to decide if the top edges of the paintings were painted a lighter shade or it was just the lighting. Roberta Smith walked in and I mentioned it to her. When we asked the director of the gallery about it, she took a painting down to see it in another light (it was Roberta Smith after all), and we still couldn’t decide. I recently asked Tuttle about it (next post) and he had an interesting answer. The work was painted all the same color, but where the wood stretcher bars pressed against the canvas, the texture was subtly changed and reflected light differently. So once again, everything counts!

Posted by Charles Kessler at 6:47 PM

it is great to have found your blog !