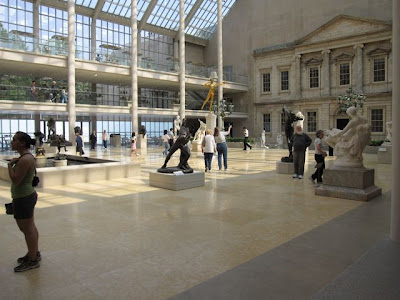 The New Engelhard Court
Every renovation the Metropolitan Museum made in the last twenty years or so has made the art experience better and better (unlike another museum I could mention). The light brought into the Greek and Roman Galleries is so beautiful, and their collection looks so stunning, I literally get high walking around. The new 19th C. galleries are harmoniously proportioned, richly warm spaces that were cleverly carved out of the Polynesian Wing’s soaring ceiling, and the catacombs under the grand staircase are an absolute delight. And of course the Chinese, Japanese and Egyptian galleries are some of the best in the world. 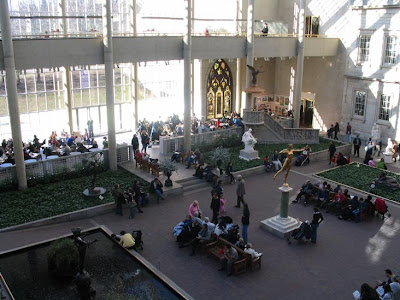 The old Engelhard Court (from the Bridge and Tunnel Club website).
But I’m sorry to say I’m disappointed with the renovation of the American Wing, at least with the Engelhard Court. Without the greenery, the sunken areas and the different color pavements that used to break up the space, the new court feels too large, too public and too empty. It lost the warm ambiance of the older space (see below) and it’s now more of a dull open plaza than an inviting sculpture garden. The new space does allow more sculpture to be displayed but, not being a fan of this period of American art (which I think is provincial, pretentious and sometimes downright silly), I don’t see that as worth the trade-off. 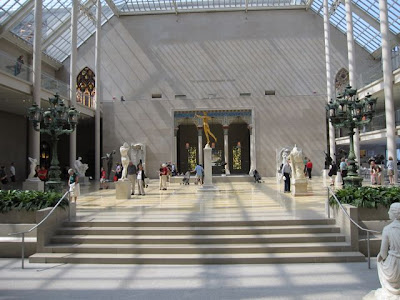 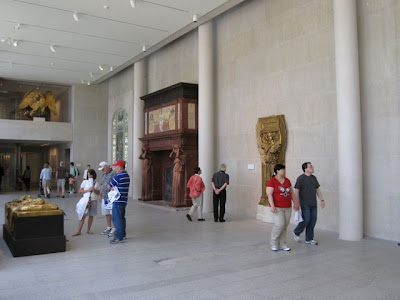 East Wall with the Vanderbilt Mantelpiece
The five-story south wall housing the pillared loggia designed by Louis Comfort Tiffany for his own home is especially blank looking, and ridiculously out of scale with the art. (Fortunately the opposite wall, the facade of Martin E. Thompson’s Branch Bank of the United States, hasn’t changed.) Likewise, the east wall (coming in, on the right) is comically out of scale with what’s installed there - the Vanderbilt Mantelpiece and Tiffany’s Garden Landscape and Fountain -- but at the same time these works feel weirdly cramped in the space. 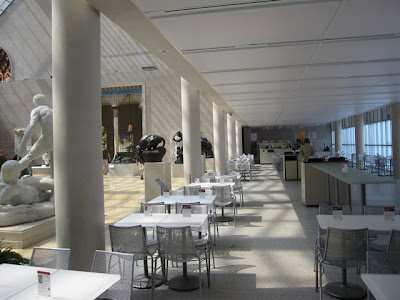 This disturbing, contradictory combination of simultaneously being too open and too cramped extends to the Cafe. It is no longer separated from the main space by a lattice fence, so it feels too much a part of the larger court; nevertheless it feels confined because of the low ceiling needed to accommodate the new mezzanine. This is made even more of a problem because the windows overlooking Central Park have been temporarily frosted to hide an ugly staging area for construction they’re doing on the second floor galleries (see photo of staging area below). They promise the view will return in 2011. 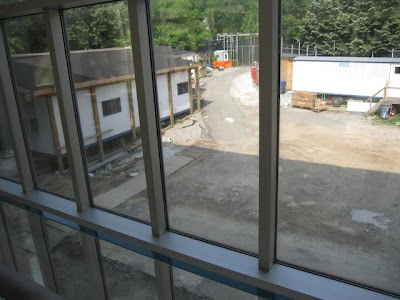 Which brings me to another complaint: there are no comfortable places to sit and rest at the Met anymore. A cement bench or busy cafe just won’t do it. Before the cafe was added a few years ago, they had comfortable chairs overlooking Central Park where people could sit quietly, read, maybe take a nap, and rest up. The Brooklyn Museum has lately created many comfortable areas to sit, and the Frick is unsurpassed in that way (as well as every other possible way). In spite of all the past great additions and renovations, I’m beginning to get the feeling that the Met just wants to move the crowds along, maybe feed them in an efficient manner, sell a few books and art chachkas, and move 'em out. 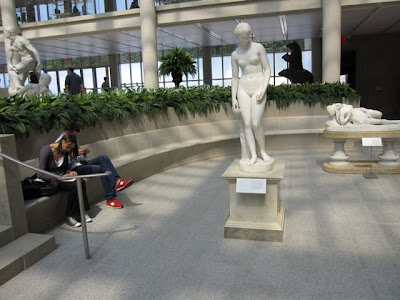 Finally, speaking of cramped spaces, I’m reluctant to spoil the surprise, but an unintended (I assume) surreal treat awaits you in the newly renovated period rooms. Take the new glass elevator in the northeast corner of the Court to the oldest period rooms on the top floor, and you'll see what I mean. You might find a portal into John Malkovitch’s mind there. 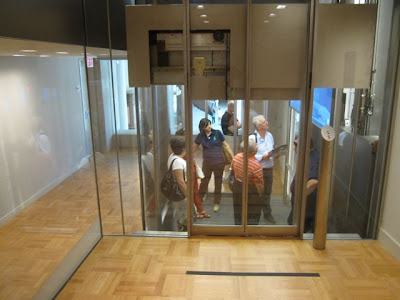 This is a wonderful, quirky review of the new American Wing. Can't wait to go to see if I agree! And love the photos.

I really miss the best place in the museum to take a rest. They moved the Manship bears who were a welcome sight while siting on a bench surrounded be green plants. It is now a cold ugly room with some of the worst art in all the Met.

It appears The Jersey City Art Media Guru has experienced considerable discontentment not only with the new layout of the American Sculpture Wing itself but with that period of American sculpture as well.

It sounds as if the sculpture and the wing deserve each other.