A Weekend in New Haven

I highly recommend New Haven to all art lovers. It's still a bit funky, but it's become a lot better — less crime, more good restaurants and interesting stores, and lots of first-rate music, dance and theater available (we saw the play 4000 Miles at the Long Wharf Theater and loved it). And New Haven is still relatively affordable. 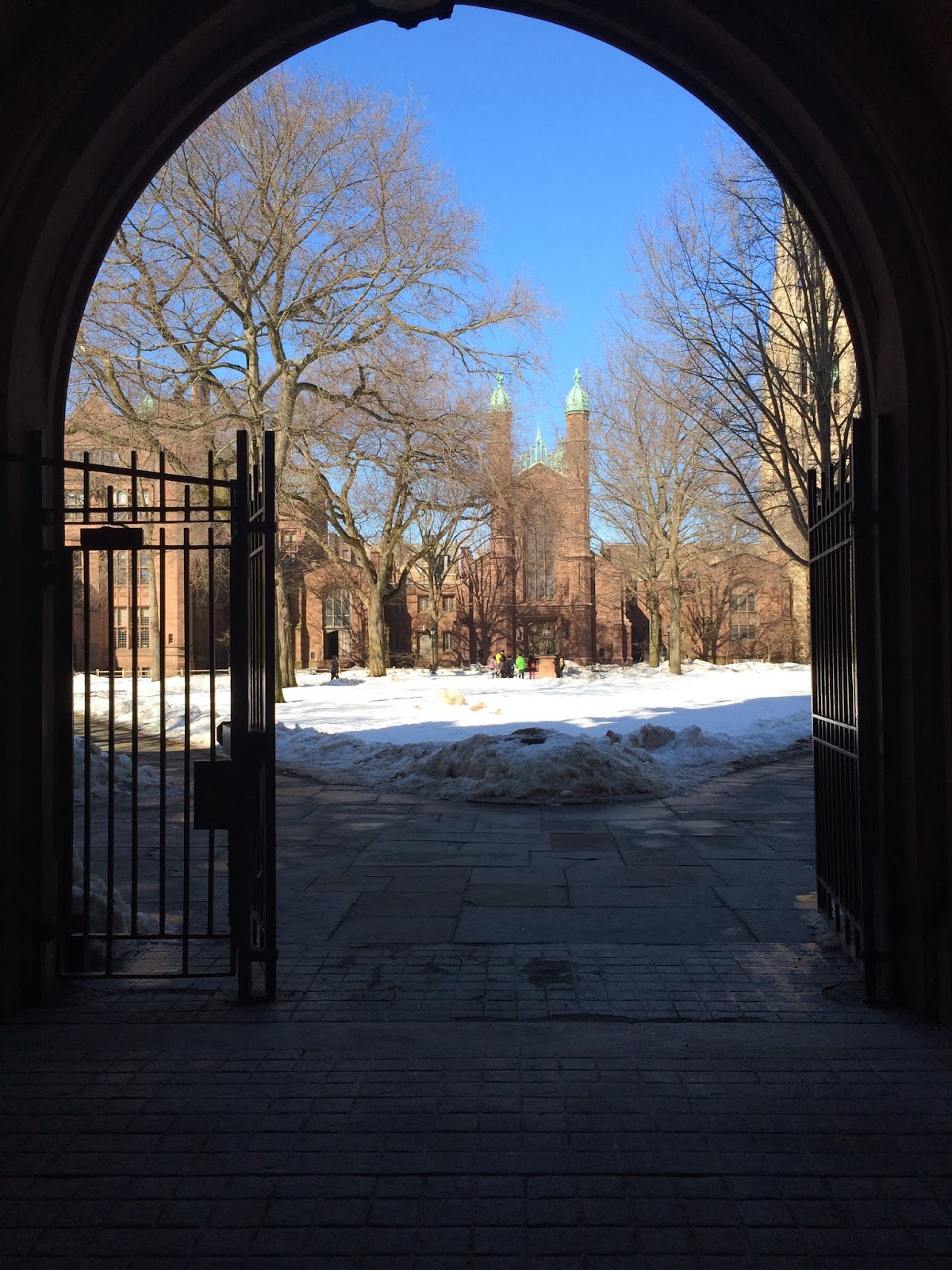 And of course there's Yale – it's gorgeous, the epitome of a Gothic Ivy-league college; and Yale's cultural resources are extraordinary. The Beinecke Rare Book Library, one of the largest collections of rare books and manuscripts in the world, is worth a trip in itself. There is something about this multi-story glass display of books, presented as if they're holy, that's profoundly moving.
When I visited, there was an comprehensive exhibition of endpapers – Under the Covers: A Visual History of Decorated Endpapers (until May 28th).
Endpapers are sheets of paper pasted to the inside covers of books. It began as a way to protect medieval illuminations from the wear of wood covers, but over time they were used for purely decorative purposes. This exhibition traces the development of endpapers from their beginning, in medieval times, until the present – all from the Beineke's own collection.

There's also the Yale Center for British Art, the largest collection of British art outside the United Kingdom with a collection of about 2000 paintings and 200 sculptures. Not being a great fan of most British art, I didn't go there again this time.

And then there's Yale's outstanding encyclopedic museum where I spent most of my time. I wrote about the Yale Art Gallery last year, soon after they opened the newly restored and much enlarged new space. This trip I was able to spend more time on individual works.
Tu m' is Marcel Duchamp's farewell to painting, and it's a summing up of his past work. I must have seen this painting a dozen times over the years, but I've focused on its conceptual aspects. I never realized how beautifully painted it is – how delicate and sensual.
And after a close examination, I also noticed this strange beading around the bottom edge of the painting like a black gritty caulk.
I never read anything about this, but you can be sure, knowing what Duchamp scholars are like, someone has written a long brilliant essay on it.

Some of my other "discoveries" from this visit are:
This is a small painting, about letter-size, but I enlarged the photo here so you can see how dramatic it is close up. Saint Peter, as Crivelli depicts him here, is not someone who will easily give up the key to heaven.

Another small painting that I spent time with and savored is this glowing Seurat:
This Andrea del Sarto is on loan so the Yale Gallery website doesn't have a reproduction of it, but luckily I was able to take a pretty good photo. I was struck by how modern it looks.
According to the typically informative wall label, Andrea painted this rapidly from a memory of meeting Bernardo Accolti about fifteen years earlier. Remarkable!

I also paid more attention to this Manet, a painting obviously influenced by Goya's Clothed Maja.
I know, I know, I'm a sucker, but I'm totally charmed by the playful kitten on the bottom right.

There were also several temporary exhibitions, and two of my favorites were:
Red Grooms: Larger Than Life (until March 30th) – his fun homage to the great artists of the twentieth century.
This show was all from Yale's own collection and included several very large paintings and twenty preparatory cartoons and other drawings.
And finally, Byobu: The Grandeur of Japanese Screens, an exquisite exhibition of Japanese screens, mainly from the seventeenth and eighteenth centuries. Every one of them was breathtaking. This show was filled out by work from private collections.

Posted by Charles Kessler at 5:37 PM

You encourage to rethink "Tu m'. It looks real fine, visually as well as conceptually engaging, and highly ambitious, as though it might compete with the "Large Glass" for masterpiece status in the Duchamp oeuvre, which I've never thought before. Could that be possible?

I think so, Carl. Tu m' might not be as complex, innovative and edgy as the Large Glass, but it's a pretty great painting.