Saturday I saw The Lost Collection, the latest exhibition at ShuaSpace, a dance/performance/visual arts space in the Journal Square neighborhood of Jersey City. It was a compelling, entertaining and often moving installation by Laura Quattrocchi, the co-director (with Joshua Bisset) of Shua Group.
Since 2007, Quattrocchi has been collecting and documenting items people have lost – hats, gloves, baby shoes, etc.. Photographs of the objects at the site they were found are installed on the walls of the gallery, and many of the objects themselves are hung from the ceiling – each carefully labelled with the location and date it was found. It's a strange and joyously colorful environment, and a little sad sometimes. I was touched by the care taken to document, preserve and display these forlorn objects.

The walk to ShuaSpace got me thinking about the viability of Journal Square as an arts district. There’s no reason, other than bad city planning, that Journal Square isn't thriving and culturally vital. It used to be the center of commercial activity in Jersey City, and it's still a major transportation center. The PATH train ride to the World Trade Center takes only 15 minutes, and to the Village only 20 minutes. Bus passengers from all over the area used to walk by and patronize stores and restaurants on their way to and from the PATH train. But in the early seventies, the Port Authority moved the buses into a bunker-like building that walled itself off from the street. Journal Square has gone downhill economically ever since. 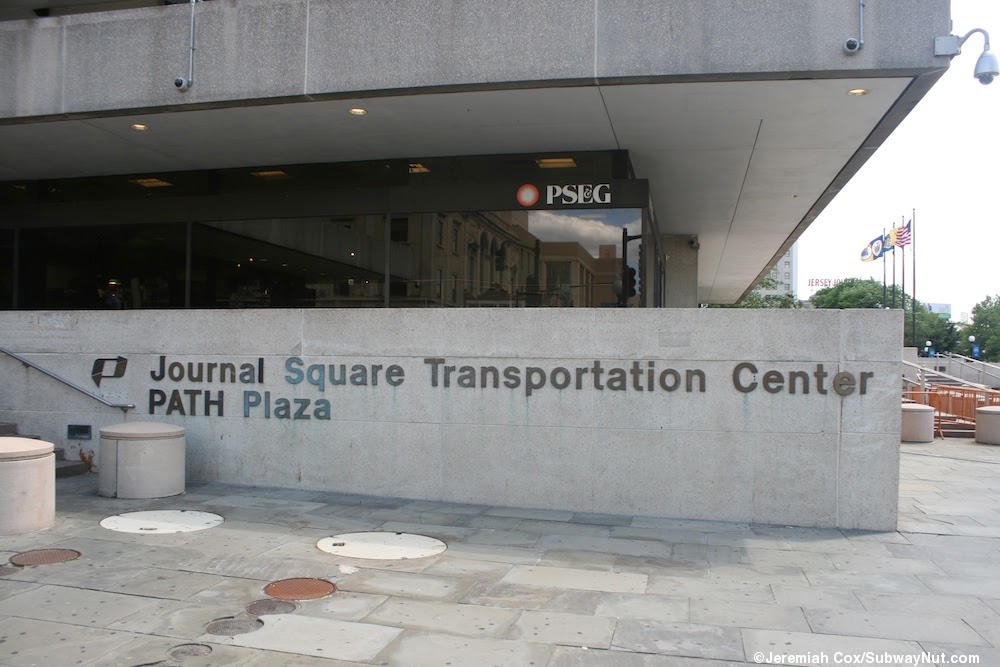 Journal Square has many cultural resources ready to be tapped. Hudson County Community College (with its excellent culinary school) is in Journal Square, and the 30-acre campus of Saint Peter's University is nearby. Mana Contemporary, which I wrote about here, is a short walk from the PATH.
Mana is more than a million square feet large and consists of art storage (for almost every major museum in the area), a couple of hundred artist studios, dance rehearsal spaces, exhibition spaces, sculpture studios – the works! And the walk to Mana is a delight, passing by several blocks of a lively Indian neighborhood with great Indian restaurants, fragrant food markets and colorful jewelry and clothing stores.

Journal Square has two Baroque-style ornate movie palaces built in the late twenties. The Stanley Theater has been beautifully restored and is now used as an Assembly Hall of Jehovah's Witnesses. (Rumor is that it’s for sale.) And the 3000-seat Loew's Jersey Theater, lovingly restored by the Friends of the Loew's who saved the building from being demolished, is now used for movies, music and other events including last weekend's successful StageFest.
Perhaps even more important for the area is that Art House Productions, a prodigiously active performing and visual arts organization, will be moving there soon.

But Journal Square suffers from two main problems. The city should persuade the Port Authority to open up their building to the street, the way Alice Tully Hall was, and perhaps go back to having at least some of the buses end their run outside the Transportation Center, in the business district.

The other problem is the area needs to be more pedestrian-friendly. Some major traffic calming along Kennedy Boulevard, an eight-lane street/highway dividing the PATH from the commercial areas, would make it easier, safer and more pleasant to cross. Perhaps wider sidewalks and a large, attractive meridian to narrow the street might also be helpful.
Of major concern is a disturbing quote from the developer Jeff Persky, describing the project as a “self-contained neighborhood.”  This would be disastrous if allowed. The same developer (with help, and some pressure, from the community and the city government) did an excellent job of creating a public plaza at the Downtown Jersey City PATH station next to their Grove Pointe development. If the city is going to allow them to build very high in Journal Square, a similar public plaza should be required. In addition, retail or some other public use that's open to everyone should be on the ground floor. Street level certainly shouldn't be for something like a parking structure.

There's great potential for making Journal Square a lively and vital cultural center and an asset to the region. Let's hope they don't blow it!
Posted by Charles Kessler at 11:05 PM