Just as getting a joke requires sensitivity to a whole background context, to presuppositions and intended as well as unintended meanings, so “getting” a work of art requires an attunement to problems, questions, attitudes and expectations; it requires an engagement with the context in which the work of art has work to do.

I was also reminded of the famous exchange between Franz Kline and a collector irate about Barnett Newman's first exhibition. The longer the version of this story the better, and I found a good long one here:


Franz Kline and Elaine De Kooning were sitting at the Cedar Bar when a collector Franz knew came up to them in a state of fury.  He had just come from Newman’s first one-man show. ‘How simple can an artist be and get away with it?’ he spluttered.  ‘There was nothing, absolutely nothing there!’
‘Nothing?’ asked Franz, beaming.  ‘How many canvases were in the show?’
‘Oh maybe ten or twelve - but all exactly the same - just one stripe down the centre, that’s all!’
'All the same size?’  Franz asked.
‘Well no; there were different sizes; you know, from about 3 to 7 feet.’
‘Oh, 3 to 7 feet, I see; and all the same colour?’  Franz went on.
‘No, different colours, you know; red and yellow and green… but each picture painted one flat colour - you know, like a house painter would do it, and then this stripe down the centre.’
‘All the stripes the same colour?’
‘No’
‘Were they all the same width?’
The man began to think a little.  ‘Let’s see.  No. I guess not.  Some were maybe an inch wide and some maybe four inches, and some in between.’
‘And all upright pictures?’
‘Oh, no, there were some horizontals.’
‘With vertical stripes?’
‘Oh, no, I think there were some horizontal stripes, maybe.’
‘And were the stripes darker or lighter than the background?
‘Well I guess they were darker, but there was one white stripe, or maybe more…’
'Was the stripe painted on top of the background colour or was the background colour painted around the stripe?’
The man began to get a bit uneasy.  ‘I’m not sure,’ he said, ‘I think it may have been done either way, or both ways, maybe…’
‘Well I don’t know,’ said Franz. ‘It all sounds damned complicated to me.’

Thinking it might be easier to get, I sent the women to see the Matisse and the Model exhibition (through December 10th - hurry) at Eykyn Maclean, 23 East 67th Street (just west of Madison). It's definitely worth seeing but, unlike the Barnett Newman show, this one is way over-produced with multi-colored walls and pretentious extra-large wall texts. There's some good work though -- and even the not-so-good work is interesting to see. 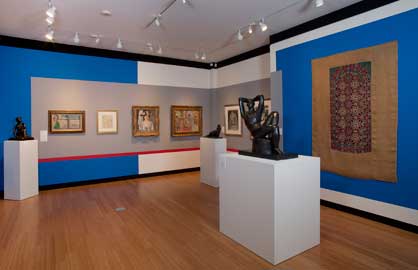 Posted by Charles Kessler at 3:08 PM