According to their website, The Phillips Collection has been devoted to exploring “the development of color and light in modern art;” and the main attraction at The Phillips Collection right now, the exhibition Degas’s Dancers at the Barre: Point and Counterpoint (until January 8, 2012), fits in perfectly with this mission. It is also the primary reason I traveled to Washington.

It is a comprehensive exhibition that deepens our understanding of Dancers at the Barre, one of the most famous paintings in their collection. The show consists of about 30 major paintings, bronzes, drawings and prints from around the world that shed light on this painting's subject, composition, style of painting and color choices. In addition there are photographs from a conservation study of the painting that show Degas’s continual revisions of the dancers' positions and the many adjustments in color he made. It's an impressive scholarly and aesthetic achievement.

Dance was a major subject for Degas (he did more than 1500 works on the subject!) and it makes sense to me that he’d be attracted to ballet. Ballet dancers, even when practicing or just hanging around, get into more interesting poses than other people. They also seem to float when they move, and even their clothes, their tutus, are light and airy. All of this allows Degas to free his forms from gravity and let them flow, breathe and glow like colored air.

BTW, if you love Degas, in addition to the work at The Phillips there are 19 paintings, 33 drawings and 38 prints at the National Gallery. Even more impressive, the National Gallery has the largest collection of sculpture by Degas in the world --  66 of them, a remarkable two-thirds of his entire sculpture production including 52 of his original wax models. This should be enough to indulge the most fanatical Degas admirer. (But if you still haven't had enough, there's the Degas and the Nude exhibition in Boston.)
Among the other Phillips exhibitions aiming to “explore the development of color and light in modern art” is Eye to Eye: Joseph Marioni at the Phillips (until January 29, 2012). Marioni is known for making almost monochromatic paintings that are composed of several layers of semi-opaque colors. His earlier work, like Robert Ryman’s, was about the physicality of the paint, and his later work, while superficially not much different, is more lyrical. I think he achieves this new lyricism the way Morris Louis does it in his "Veil Paintings" —  by showing what colors are underneath each layer, even if it’s just a little peek around the edge, sensitizing you to what colors are in the mix and thereby creating depth, light and air.
And then there’s the Phillips’s Mark Rothko Room, an installation originally created in 1960 by the museum founder Duncan Phillips with Rothko’s involvement.  It’s a small room with one classic Rothko painting on each wall, it has a single bench in the middle, and there is a limit of no more than eight visitors at a time. That might sound nice, but I’m beginning to find it irritatingly precious and pretentious. The work stands up well enough by itself and these theatrical trappings are a heavy-handed embarrassment. 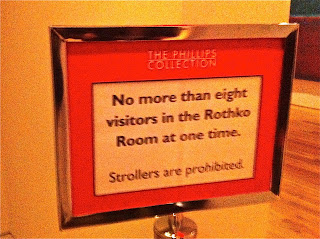 On the other hand, the room in the East Building of the National Gallery with Matisse's cut-outs is unpretentious in spite of the restricted hours and low light necessary to protect the work.  I suspect the reasons for this are that the room is larger, the art is bigger and more assertive, and the raggedness of the cuts (Matisse's version of rough brushwork) makes the work feel very present.
The other major exhibition in Washington is also involved with color — of all things, Andy Warhol: Shadows (until January 15, 2012) at the Hirshhorn. It’s a show of rarely seen work — 102 large canvases silkscreened and hand-painted (with a mop) blown-up photographs of shadows in Warhol’s studio. The canvases are hung arbitrarily edge-to-edge for almost 450 feet along the Museum’s curved galleries. I say hung arbitrarily because Warhol originally said they should be hung randomly, but when they were first exhibited, Warhol allowed his assistants to hang them any way they wanted (which wasn't random), and the Hirshhorn, unnecessarily I believe, stuck as much as they could to the original installation.
I don't ordinarily think of Warhol as a colorist, but this exhibition changed my mind. Not only are these gorgeous, virtuosic, luscious paintings in themselves, but the installation is a unique color experience in that, like architecture, it changes over time as you walk along it. The experience of one painting, or group of paintings, affects the experience of the next. It’s a thrilling journey.


Another nice thing about this exhibition is the presence of what the Hirshhorn refers to as  their "Interpretive Guides" — staff people who tend the exhibition but are not guards. Their job is to engage viewers about the work and answer questions. I hope other museums follow suit.
Posted by Charles Kessler at 9:41 PM