Community interaction during my years at the Rose didn’t stop at the entrance to the university, it extended to the cultural community at large, particularly the community of artists whose studios we regularly visited, whose work we annually exhibited and acquired, and whose presence we invariably valued as a resource and soundboard for our program. All of which I felt was entirely natural to do—which I even went so far as to imagine anyone would do within a museum whose mission was identified with the art of our time and was physically located in or near a highly sophisticated and culturally endowed city, whether it was Boston or Chicago or San Francisco or anywhere else in the country. Yet, I detected no trace of that community in the “Collecting Stories” installation, let alone an institutional relationship to it, prompting me to describe here how it came about under my directorship and what it meant regarding our exhibition and collection programs.

We began exhibiting Boston area artists at the start of my tenure as director of the Rose, in 1974, in response to a handful of considerations. For instance:

(1) There was plenty of talent available, as I had seen around town since coming to Brandeis in 1968 and had then begun to describe in monthly critical reports to Artforum magazine, where I served as a regional editor prior to moving my base to the museum. I knew there were many shows waiting to be done.
(2) I felt we could fill a need. While there were relatively few commercial galleries in Boston at the time, there was even less in the way of institutional support. The Museum of Fine Arts and the Institute of Contemporary Art occasionally acknowledged area artists but looked primarily to New York for major exhibition programming. Suburban museums in Lincoln, Framingham, Brockton, and Duxbury served mostly local constituencies, while the college and university galleries and museums, which were numerous—at Harvard, Boston College, Wellesley College, Tufts, and Boston University—tended to be insular in serving mostly their campus constituencies. In undertaking support through exhibitions of area artists, I believed we could help generate the feedback that was so vital to their studio practice.

(3) I was attracted to the pleasures of learning about art through knowing art’s makers since the start of my professional career. I volunteered to organize and write about an exhibition of my studio faculty colleagues upon taking my first job at the University of Massachusetts in Amherst in 1963; I supported Bay Area artists while I taught art history and was director of the Mills College Art Gallery in Oakland between 1965 and 1968; and I was already familiar with a growing number of Boston area artists whose studios I had visited, and whose work I very much respected, when I started at the Rose. I had my foot in the door to an untapped field.

(4) Exhibitions of area artists would be economical. The program budget during my first year at the Rose was $4K, so you can see how it made sense to utilize the abundant resources at hand.

I picked the first few shows, but the vast majority was selected in tandem with curator Susan Stoops, my Team Rose helpmate for close to 20 years. Their purpose was to provide exposure, which meant giving each artist enough space to show a significant body of work, maybe only three or four pictures if they were really large, maybe eight to 10 if they were very small, which in turn meant limiting the number of artists to half a dozen on average. We titled the shows—“Stepping Out,” “Restless Natives,” “Worlds Apart,” “Seeing and Believing,” and “Out of the Woods” were among my favorites—but the titles came after the art was selected, and they were meant poetically, to suggest the aura of the artworks commingling, to evoke their shared karma. Through 24 years we covered a lot of media—painting and sculpture and their hybrids, installations, photography, paper works—but we never started out by looking for one medium or another, just as we never started out with a theme in mind, or an expressive genre such as abstract, representational, and so forth.

In fact, that’s why IMO the program worked so well, because it never started from an a priori concept—as group shows almost invariably do—it each year evolved out of a natural, open-ended process of building relationships by interacting with artists in their studios, seeing what was going on in and around town, and letting the experiences sink in. It was as though the process allowed the exhibitions each year to create themselves, as though all we needed to do was listen to the voices of the artworks we’d seen and allow them to speak for themselves, and we’d then know when we had enough for a show, which would resonate with which, what their number would be, and how and when the show would happen. The challenge lay in the looking and listening, the rest was easy.

Alas, those exhibitions stopped happening when I left the Rose, despite the fact that they had been endowed since 1983 as The Lois Foster Exhibition of Boston Area Artists, and there was no evidence of them in the 50th anniversary exhibition. A personal friend close to the museum suggested that my successors, Joe Ketner and Michael Rush, were troubled by the area artists designation, feeling it was limiting, even demeaning, to the artists’ stature in the community. If that were the case, however, it wouldn’t be news. In my own experience, there were always culturatti around who threw up smokescreens like that to mask their concern about being thought provincial—it was an effect of Boston’s proximity to New York. 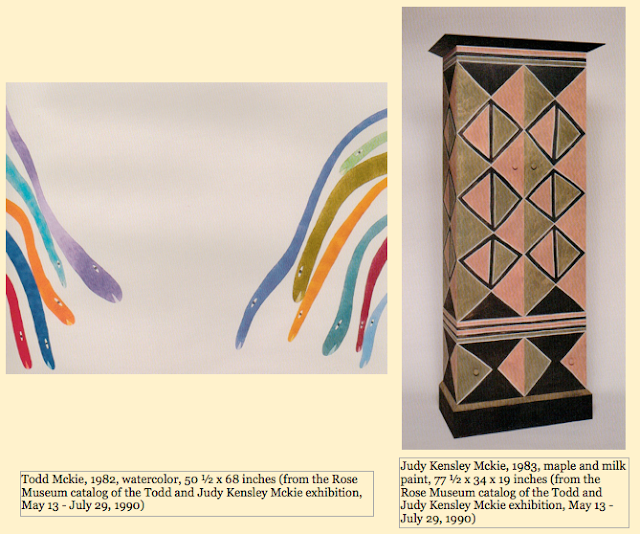 In any case, and apart from our annual shows, Boston area artists were further visible among our monographic exhibitions, which included ambitious retrospectives of James Weeks, David Aronson, and Barnet Rubenstein and mid-career surveys of Todd Mckie & Judy Kensley Mckie and Katherine Porter. In addition, individual works by Boston area artists, acquired through gifts and purchases alike, always figured in, and helped significantly to define, subsets of the permanent collection that we continually sought to shape and develop—minimalism and postminimalism, realism, sculptors’ drawings, and photography, to name a few.

All of which reflects equally the highly creative cultural community we served and the highly rewarding dividends it paid. Ask any Boston area artist and they’ll tell you what that environment was like.

(This is the third part of a three-part post)

Carl Belz is Director Emeritus of the Rose Art Museum, Brandeis University.
Posted by Carl Belz at 8:06 AM

This is a wonderful chapter, perhaps my favorite. It speaks to the depressing similarity of many museums where directors seem driven by the impulse to be in style and therefore important rather than look at art that is around them.. That Carl is separate from groupthink made the Rose (and Boston) a special place while he was here. More than 70 artists signed a petition protesting his removal

I know something about this one - yes indeed. Because I myself was one of the artists included in this series of Lois Foster Exhibitions.. and did I care if it "regionalized" me? Of courses not, among the factors that pulled me from the Boston area was the nagging effect of those who constantly wrung their hands about the perception of being "regional." Neither Carl, nor Susan Stoops were "hand wringers" they simply refused to use a frame of reference any smaller than the work that was/is possible at a given moment in time. Their frame was wide - and made the Rose a place where they generously encourage all to work and look with a similarly informed sense of possibility. It was both intimate and expansive - the perfect learning environment for students, the artists who worked in the space - and the audiences who visited. As an educator, I can say that the leadership at Brandeis has always seemed myoptic about the great deal of general education that was, and can be delivered in an art museum.

Dear Carl,
I remember when you went out of your way to see my show in Newton after seeing my slides and then included me in your retrospective of Boston artists at the Fuller.I have been writing on "Berkshire Fine Arts" where the Boston Community still lives on.When Charles Giuliano,editor of "Berkshire Fine Arts" wrote a retrospective of his life in the Boston Scene,I wrote a comment that could apply to you.