Today my world is black, white and gray. I’m kept company by an image of a single, mercurial cloud hanging in the summer sky and hovering above buildings silhouetted by an overhead sun that makes every edge feel razor sharp.

I’ve begun working on a series of altered prints, images of a sunny view outside my studio window. Drawing on top of the prints with pencil, I intend to change the character of each print by building up the surface and creating a quiet, visual drama in each one. Retreating into my dark, book-lined room, I’m set up on a long, craggy table. Sequestered from the outside, I hope to find some peace of mind in the process.

While working I’m watching an early episode of the 1960’s TV show “The Fugitive.” I’ve taken to this program, obsessed with it and the idea that a man on the run with little more than the clothes on his back and a few dollars in his pocket can survive.

It’s 1964 and America feels different than today. The small towns, filmed in black and white, which Dr. Richard Kimble passes through, have main streets with mom & pop stores, huge cars, and children playing in the streets. A person wanting to lose himself, hide or find a job can easily thumb a ride into town for a couple of weeks and then be on his way. 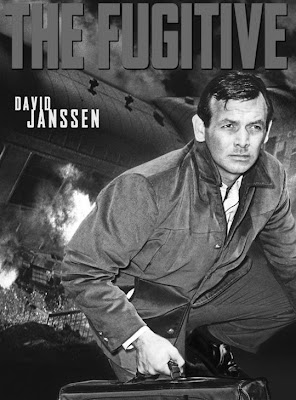 While listening to and considering the dangerous situations that Richard Kimble finds himself in I take time to build up graphite on the paper. It’s slow going and my pencils need to be sharpened every few minutes to give me as much control as possible.  With the porous, soft material I create depth and density. I especially like the feeling of rubbing the steely-colored dust with my fingers, making the darks as black as possible.

Thoughts of temporality run through my mind, as I consider how a single cloud can take shape and change form many times over, positioning and repositioning in the vastness of the sky. This floating presence has a relationship to the buildings around it making it feel organic and weightless. The cloud’s fleeting, rootless character is captured by my use of technical means—its identity caught for posterity in a diaphanous, bright white in my final drawing.

I can bear to watch Richard Kimble endure hiding out, getting double-crossed, captured, and escaping again and again because I trust that at the end of his journey he will find what he’s looking for—the one-armed man who murdered his wife. He will finally be set free from the pain and desperation that have plagued him for so long. I watch David Janssen’s solid, subtle, truth-filled performances without disbelief even while I doubt that a fugitive today could hop a freight, assume many aliases, and persuade people of his innocence.

Though our lives are constantly in flux, I take comfort in the thought that as quickly as a cloud passes across the sky, a man on the run can find momentary refuge. The message is simple: change carries a particular kind of freedom and can be expressed and accepted as an end in itself.  The key? Living and creating in the moment.

Kyle Gallup is an artist who works in collage and watercolor.
Posted by Left Bank Art Blog at 4:19 PM

That your pencil needs constant sharpening is a comfort..You are alert and poised to mark and explain the dramatic changes that confront and confound each of us on any number of levels. The Fugitive as metaphor and traveling companion seems perfect.. You are marking the dangers and anxiety of change and conformity. Your imagery and making it timely and powerful Kyle.

That your pencil requires constant sharpening is a comfort. It implies that you are ever diligent and alert to the changing landscape that your are investigating. The Fugitive a perfect metaphor and traveling companion. False leads. wrong assumptions... You test the map of our knowing and re calibrate each decision carefully and personally to help with the complexity of traveling the course... I am stunned and excited by what you make and write.

I must admit that I have never seen The Fugitive. That did not stop me from enjoying Kyle's beautiful writing and art. In the same year (1963) that The Fugitive went on the air, a favorite of mine went off. Naked City was a black & white series, that was filmed on location in NY during the 50s & 60s. The metaphors found in A Fleeting Impression combined with Kyle's stunning black & white image of NY bring up Naked City for me.

What a beautiful drawing, graphite on an original print, the artist has posted here! I would love to see the actual pencil marks, razor sharp as the view from Kyle Gallup's window. How wonderfully the moods of time and place, past, present and future are so poignantly and succinctly captured. Seldom have I read so brief and penetrating a description by an artist of what real-time inspiration in the studio is like while the artist's mind scans almost simultaneously the immediate stimuli of nature and the city,the material tools at hand and the metaphors found in specific popular culture media that has and still moves the artist and thousands of others.