Dr. Beth Harris and Dr. Steven Zucker, the founders of smARThistory, say they have "aimed for reliable content and a delivery model that is entertaining and occasionally even playful. Our podcasts and screen-casts are spontaneous conversations about works of art where we are not afraid to disagree with each other or art history orthodoxy." I checked out a sampling and agree.

I went to the Whitney mainly to see their comprehensive Lyonel Feininger exhibition so I was surprised to come across this delightful show — a selection from the more than 1000 works of the original Gertrude Vanderbilt Whitney collection.  (BTW, even though I’m not a great fan of Feininger, I learned there’s more range and depth to him than I realized.)
Gertrude Vanderbilt Whitney was staggeringly rich even by the standards of today’s billionaires. She was the daughter of Cornelius Vanderbilt II, the richest man in America at the turn of the century, and the wife of Harry Payne Whitney from one of New York’s wealthiest families. Defying her background, she became a sculptor, and not a bad one as you can see from this photo (above). Perhaps more important in terms of her place in history, she was a major patron of contemporary American art at a time when American art was ignored.
The exhibition attempts to capture the look of the original museum and the democratic approach to collecting and installing — salon style with a diversity of subjects, styles and quality. (The Studio School took over the building, and the original Whitney Museum entryway, lobby and several rooms on the first floor - now used for the school's gallery - are still pretty much intact and are open to the public.)

One of my favorite paintings in the exhibition is by the under-appreciated painter Louis Eilshemius.

Mark di Suvero at Governors Island, presented by Storm King Art Center (until September 25, 2011).
Governor’s Island is worth a trip in itself. You have to take a ferry there (click here for the schedule)
so you feel like you’re on summer vacation somewhere. It’s a verdant island with historic old residential homes once used by naval officers.  They even have a beach with a volleyball court, a bandstand and a hamburger shack.
The show is the largest outdoor presentation of di Suvero’s sculpture since the 1970s — 11 sculptures created over a period of 40 years and spread out over the 172 acres of  Governors Island.
These are big sculptures, some 16 feet tall, but they never feel imposing or oppressive the way Serra’s work often does.  Rather they are human in scale and even intimate in their way. De Suvero had a good point with regard to the height of his works: “Forty-story buildings are being torn down in New York so that sixty-story buildings can go up. Why are people so surprised at seventeen-ton sculpture?”

Storm King developed a free app to accompany the exhibition. It’s particularly useful since no map is provided and you really need something to locate the sculptures.


BMW Guggenheim Lab, at the corner of Second Avenue and Houston in the Lower East Side (Until October 16, 2011). 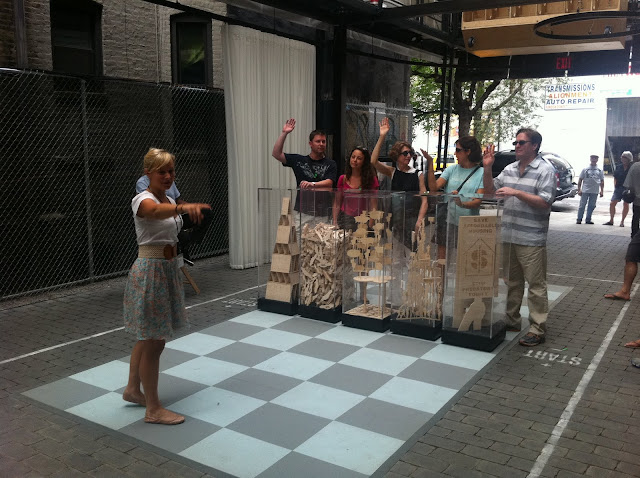 This isn’t an exhibition so much as a city-planning science museum. It’s purported goal is to get ideas from people about what makes a city livable, but, so far at least, it’s more didactic than that, and probably more interesting because of it. They will have lectures, films and various events, including games (like the one shown above), about the needs, trade-offs, and challenges of cities.

The "lab" is housed in a temporary space designed by the Japanese architects Atelier Bow-Wow. Made of carbon pillars and carbon fiber and open front and back to the street and air, it's more of a high-tech tent than a building. Practicing what they preach about livable cities, they provide a nice amenity -- a plywood food shack run by Roberta's, Bushwick's popular pizza restaurant.

This will be a long-term experiment. After they finish here, they'll pack up and take the show on the road to Berlin, Mumbai and several other cities.
A quick note about "artist/philosopher" (the curator Alexandra Munroe's designation) Lee Ufan exhibition in the Guggenheim's uptown space. It is precious beyond belief. It's embarrassing in its pretentious artiness, and it's appallingly derivative. This is a bad show even in comparison to the recent run of bad Guggenheim shows. "Artist/philosopher" indeed!

Rembrandt and the Face of Jesus, Philadelphia Museum of Art (Until October 30, 2011).
The show is a bit of a rip-off. The show should be called The Face of Jesus: a few Rembrandt paintings, drawings and prints and a lot of paintings by his pupils. And it costs $16 general admission and an additional $9 for the “Rembrandt” exhibition — $25 total. There are a few major works, though, that for me were worth the price of admission. I particularly liked seeing two of Rembrandt's famous “100 Guilder Prints” side by side so I could observe how Rembrandt wiped the plate in different ways to bring out different features of each print. And there was this profoundly moving painting:
And finally, I noticed a strange phenomenon at MoMA and I wonder if you may have noticed it too. Almost always, on one side of a wall between galleries the art is wildly popular, while the opposite side is practically deserted.

Posted by Charles Kessler at 11:20 AM