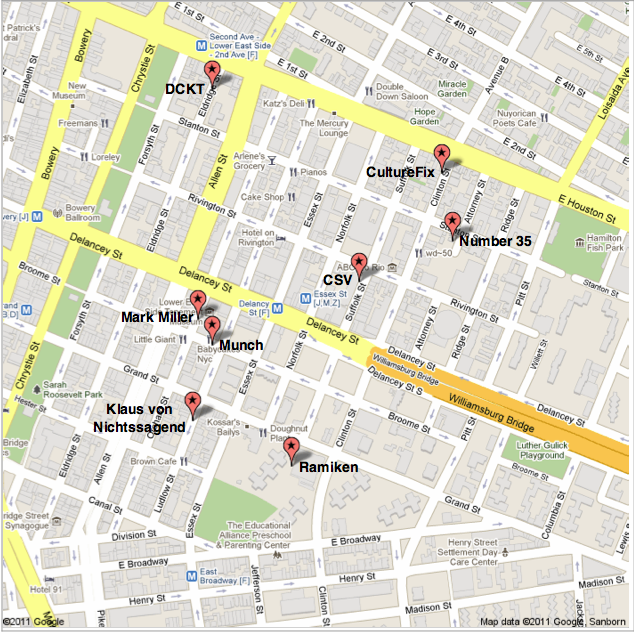 Once again, despite the bad economy, more galleries have opened on the Lower East Side than closed. The one major fatality I know about is Collette Blanchard, formerly at 26 Clinton Street. Rumor has it she's curating shows somewhere in Asia.
Reena Spaulings Fine Art doesn't answer their door bell or phone, and they have nothing on their website for after March 13th; but Reena Spaulings is a fictional artist/art dealer spawned by an art collective, so you never know what's up with them. Hell, they list 221 E. Broadway as the address of the gallery when they're on Rutgers Street, 1/2 block below E. Broadway. I must admit I'm getting tired of their shtick.
Moves:
Three galleries moved from other spaces on the Lower East Side. Ramiken Crucible's original space has been closed for the winter and may reopen in the spring, but in the meantime they opened another space (just called Ramiken), at 389 Grand Street, conveniently close to Kosars and Doughnut Plant, and down a short path between a liquor store and a park. As you can tell from the photos below (taken from their website), it's a vast improvement. The old space was hard to find, dark, low and creepy; the new space is light (almost bucolic!) and nicely proportioned. A provocative show is there until May 1st -- see it if you like snakes.

Number 35 Gallery also moved to a much nicer space, and a bigger one. It's too bad for them that a neighbor, Collette Blanchard, closed, but there's still a critical mass of good galleries nearby.  Sloan Fine Art, for example, has a high-spirited group show (through March 26th) of about a thousand+  works on used MetroCards. In any case, Number 35 consistently has good shows, and Cindy Rucker, the gallery director, is amiably informative about the work, so it's well worth the extra few blocks.
A potentially major contributor to this area is the Clemente Soto Velez Cultural and Educational Center (CSV), 107 Suffolk Street near Rivington). It's been around since the early nineties, but the five-story former school has been blighted by ugly scaffolding and graffiti for at least six years, and I'm told the building won't be finished until 2019. Too bad. That scaffolding is a depressing eyesore. Maybe they could hire artists and/or architects to come up with something more cheerful, or at least more interesting.
But even now CSV provides subsidies for forty-three artist studios, stages plays in four theaters (Art House Productions did a terrific play there a few years ago), provides several rehearsal spaces, and mounts art exhibitions in two spaces: the LES Gallery downstairs (which is also a bar/cafe), and a more felicitous "clean white space," the Abrazo Interno Gallery on the second floor. Who knows, maybe the Lower East Side will someday have another PS1 (the vital PS1 of old, that is, not the conventional establishment it's become). Please note, CSV's hours differ from usual gallery hours -- they're open 3:30 - 7 PM every day.

DCKT moved from a bright, long space on Bowery near the New Museum to a small, somewhat cluttered (at least during this over-crowded show) storefront on 237 Eldridge Street below Houston where the Horton (a.k.a., Sunday) gallery used to be.

Klaus von Nichtssagend Gallery used to be in Williamsburg, and off the beaten track even for there, then they moved to Chelsea for a month or so. Now they've settled into a small, relatively high space, but a nicely proportioned one at 54 Ludlow (just below Grand). It's on the ground floor, but you need to walk down a short corridor to get to it. They've shown good work in the past and are worth checking regularly. The Munch Gallery, 245 Broome Street (just west of Ludlow) is new. They have a small, narrow storefront in a great location near a lot of other galleries and the Ten Bells Bar. Mark Miller Gallery (not to be confused with Marc Miller of the 98Bowery website) has a small (750 SF), rather busy storefront space with a 950 SF basement on 92 Orchard Street, around the corner from the Munch Gallery. Miller is president of the Lower East Side Business Improvement District and is an enthusiastic promoter of the galleries. Among other things he's involved with is LES Third Thursdays -- when many galleries stay open from 6 PM to 9 PM.

Finally, I should mention CultureFix, 9 Clinton Street (below Houston -- get to the gallery through the bar/cafe on the ground floor, or through digitalfix, a store upstairs). CultureFix is another of the bar/cafe/art galleries now common on the LES. They took over the Greene Gallery's space, across from where Collette Blanchard was. I single them out because they are open during normal gallery hours, show work on a regular basis, and have a separate space devoted to the gallery -- unfortunately things the other bar/cafe/art galleries don't do.
Charles Kessler is an artist and writer, and lives in Jersey City.
Posted by Charles Kessler at 3:17 PM