Boo: Jersey City is re-designing Columbus Drive, in the heart of the Historic Downtown, by increasing the number of traffic lanes from an already excessive four lanes to a disastrous SIX lanes of traffic. They plan on doing this by eliminating parking during rush hour (parked cars serve as a buffer for pedestrians making city streets feel safer, and BTW, there are also more pedestrians during rush hour) and narrowing the sidewalks.
What happened to the idea of integrating Columbus Drive into the fabric of the rest of the Downtown by installing meridian strips, calming traffic, creating perpendicular parking and making it a retail street?

Jersey City, especially Downtown, is always rated among the top ten most pedestrian friendly cities in the country -- an asset this administration is spending millions to waste. Once again (e.g. The Powerhouse Arts District) Mayor Healy's administration squanders a resource other cities spend millions of dollars to acquire.

Oh, more confirmation of this administration's neglect of pedestrians: while I was out photographing Columbus Drive I nearly killed myself on the sidewalk adjacent to the Grove PATH Station -- one of the most heavily used sidewalks Downtown. 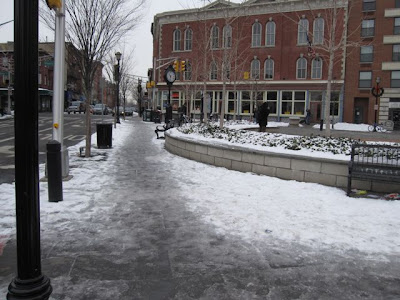 Posted by Charles Kessler at 1:17 PM