Clyfford Still, that is -- snubbed by the Museum of Modern Art in their exhibition, Abstract Expressionist New York.

Contemporaries of Still have entire rooms of their own: Mark Rothko (eight paintings), Barnett Newman (seven paintings plus 18 drawings in the entryway) and Jackson Pollock (eight paintings and an additional six paintings near the entrance). There are only two paintings by Still, and they are buried in the middle of the show.

In MoMA's defense, the exhibition is drawn entirely from their collection, and it’s not surprising that they own only two Still paintings. His paintings were very hard to come by. Still intentionally sold very little of his art; instead, he gave work away under strict conditions on how it was to be displayed. He gave the Albright Knox 31 paintings and the San Francisco MoMA 28 paintings; and, after he died, Still willed a whopping 825 paintings and 1575 works on paper (almost everything he ever made) to the new Clyfford Still Museum in Denver.
But why didn’t MoMA curator Ann Temkin at least place Still's seminal 1944-N No.2 in the beginning of the show where it would have stood out as an extraordinarily advanced and mature painting?  And it’s not only MoMA who undervalues Still. Roberta Smith’s review of the show points out how outrageous it is to have de Kooning represented with only four paintings, yet she doesn’t even mention Still. Peter Schjeldahl, in an uncharacteristically shallow review of the show in The New Yorker (sorry, no link available), includes Still as one of the “definers of the movement,” but “by a whisker.”

But let's compare what Still’s contemporaries were doing in 1944: 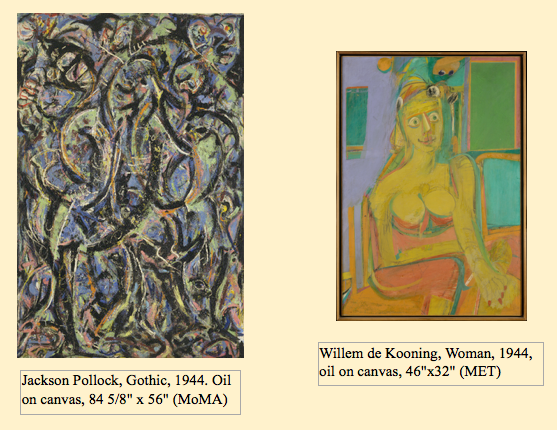 About the only artist in Still’s league was Jackson Pollock, and a case can be made that this work, great as it is, is not yet his mature work. The others didn't catch up until 1949-50.

In another post I'll write about Clyfford Still as one of the first to break from cubist composition and how he pioneered color-field painting; but for now I'd like to discuss Still's leading role in the development of large-scale paintings. This is a complicated issue. Many artists made an occasional large painting: Picasso, Matisse, Pollock; there’s even a knock-out large painting by Richard Pousette-Dart in the show. But Still was the first to make large scale a characteristic of his art by having an exhibition in which all the work was large.

There’s a lot of dispute about this including by William Rubin, long-time MoMA curator, who suggested in Artforum (February, 1967) that Still was duplicitous:  “To be sure, recent exhibitions of Still’s paintings have included giant canvases dated in the forties, but there is no evidence - based upon work exhibited at that time - of any such pictures before the fifties.” But in spite of Rubin’s doubts, Still did have an exhibition in 1944 at the Richmond Professional Institute in which all the work was large. (I found out about this exhibition while doing research for my MA thesis on Still -- in 1973 -- sheesh. FYI, a letter describing the exhibition was sent to me and later published in a catalog (page 182) of a huge exhibition of seventy-nine paintings of Still’s at the Metropolitan Museum of Art, November 17, 1979 - February 3, 1980.)

Admittedly Richmond is out of the way, but by 1945 Still moved to New York and lived there off and on for most of this period; and he maintained close relationships with most of the first generation Abstract Expressionists (he even got Rothko a teaching job in the late 1940‘s at the San Francisco Art Institute).

Still also had an influential one-person show of twelve large paintings at the Art of this Century Gallery in New York in February 12 - March 2, 1946. Robert Motherwell, the most educated and historically minded of all the Ab Ex’s, said in a Summer 1967 interview with Sidney Simon in Art International: “I must say, it is to Still’s credit -- his was the show, of all the early shows of ours, that was the most original. A bolt out of the blue.”

So why is Clyfford Still consistently disregarded? Tyler Green, who is rapidly becoming my favorite art blogger, puts it well: “... Still was a  paranoid, insulting, mean-spirited, grandiose, pompous, officious, self-important jerk. He treated MoMA and its curators badly and made it difficult for the museum to exhibit — let alone own! — his work.”

But if being an asshole is cause to be erased from art history, a lot of great artists would be unknown today.
Posted by Charles Kessler at 6:44 PM

Great entry on Still. Interesting and is beginning to raise questions in me about him and about being remembered (actually ones work being remembered). Not so much a fan of Still but want to read more of what you have to say. Change my mind! Also, Pollock was no "sweet heart"either.

I saw the show on Oct, 1. And when I walked into the room with the Still's. Unfortunately they were completely the last thing from my mind when I saw the fantastic Kline's that were also in the room. I just don't believe that the two paintings from him in the exhibition were his best work. Yeah they predated a lot of the other gents work in scale, but a lot of us have to have someone come around to say something that changes our work for the better, Still was the guy for a bunch of the painters then. Unfortunately he was paranoid about seeing the others grow and find their own styles, as then he knew he was going to have to battle with these guys who made paintings that were suddenly of more grace and power than what he was doing. And instead of being a friend to them, he dismissed them and went running back to SF.

One thing that always gets me, is that Rothko was a HUGE fan of Clyfford's and even borrowed a painting on extremely long loan from Still to put in his bedroom and show all his friends when they would come by. And eventually Still got mad and took back the painting, when he should have just realized what Rothko was doing for him by keeping that painting there. And suggested they make a trade for one of Mark's and left it at that. But by doing what he did he put a strain on their friendship and probably cost Still some more sales he could have gotten through his friend who was happy to be of help to him.

The guy may have made some great paintings, none of which are in the Ab-EX show. But he was still a colossal ass. And shitting on your friends does nothing to ever help you.

Thank you for the insight. The painting loan and negative feelings that you describe sound familiar to me--I've been in a situation similar once. That can't be the only reason why he did not fair as well as the others. Perhaps leaving the scene and moving to SF did not help. It must have been so difficult to live + paint among such strong personalities--that's probably an understatement.Just thinking about it makes me nervous.

The thing is, profession curators and art historians should be above this petty crap -- especially when they are no longer personally the target. They should carefully research what really happened independent of personalities.