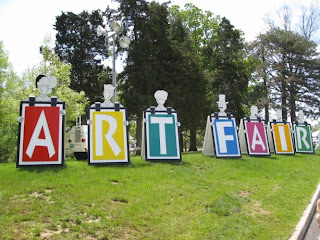 Around this time a year ago I published what I thought was an innocuous article about the organizers of Jersey City's first self-proclaimed "art fair"--and ended up with the biggest backlash I've ever had.  The problem wasn't my coverage or what the event was trying to do, but the term "art fair" itself.  I had assumed that readers would understand the difference between fair, art market, and art festival (there's even an entry in wikipedia about it!)--but I was all kinds of wrong.

The artists involved in a weekly outdoor market jumped all over me for excluding them as the original Jersey City "art fair" and, even though I tried to explain that I had been using the term in its commercial sense (think Armory or Affordable Art), they weren't having it--and I began to get upset.  Not because they didn't like the article, but because it had suddenly become my responsibility to make them understand a turn of phrase that was so fundamentally ingrained in the commercial art market.  I had assumed any artist seriously interested in selling their work would have already been aware (like it or not) of the fairs and their importance, and what the idea of bringing one to Jersey City could actually mean for putting local artists on the map.  But the fact that people were so confused and angry about the term made me wonder what else was getting lost in translation.

Fast forward a year--and we're still having linguistic difficulties with the sticky "art fair" term.  But this time, the issue lies with the organizers' use--year two.  I realize these are tough times for JC art.  The museum, one of the event's creators, is on the brink, and I doubt there was little (if any) money available to put this show together.  But, simply selling art in a hotel-like setting for a weekend and sending out a press release the week before doesn't make a show an art fair.

I don't want to knock anyone involved in this project, because "art fair" or not, we need more commercial art outlets in Jersey City, and any step in that direction is an important one.  But I believe it's important to be both precise and honest about what we call these events.  I came expecting the press and posers and buyers that buzz around Red Dot or Pool--and was disappointed.  And I'm sure others came (and left) with a very different idea of what an art fair actually is, right or wrong.  Ultimately, we may not be ready to host a true commercial fair in Jersey City, but we can certainly provide valuable showing opportunities for artists and chances for buyers to take work home--let's just be careful about what we call them.
Posted by Irene Borngraeber at 11:39 AM

"Methinks she protests too much"

Sounds like these weekly "art fair" people need to break out the dictionary and maybe even wiki and learn the differences.