I came back from a short vacation (Providence, RI -- it was great) and made a beeline to the Matisse exhibition at MoMA because it was the last day of member previews. I'll be writing more about the show later, but for now I want to focus on Matisse's 1912-16 masterpiece, Les Marocains (The Moroccans), owned by the Museum of Modern Art.

The MoMA website describes the painting the way it’s described in the catalog as well as in many other places: At the upper left is a balcony with a flowerpot and a mosque behind it [other descriptions say, more specifically, a marabout dome], at lower left a still life of vegetables [more often referred to as “golden melons and green leaves”], and to the right a Moroccan man [often described as an Imam], seen from behind, wearing a round turban.

The show confirmed what I always thought about the painting: that the "melons and leaves" in the lower left of the painting can also be read as Moroccan Muslims praying. 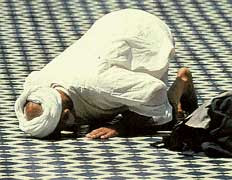 First of all there's a black-and-white grid that art historians describe as “gridded pavement” under the “melons and leaves.” It would be pretty difficult to grow melons on “gridded pavement.” But the clincher is several sketches Matisse made for the painting that I saw for the first time in this exhibition. They clearly show praying figures (see below).

I have always read those as Moroccans at prayer.

I vote for praying figures. Or whatever John Elderfield thinks they are.

Unfortunately John Elderfield, who wrote the catalog with Stephanie D'Alessandro, describes it as: "...golden melons and green leaves spread out on the pavement, which do not appear in the compositional sketches." (P. 295).

Did you see the film that Sean Scully made for the BBC in the early 90s about Matisse and Morocco? He follows Matisse's trips through the region, and if my memory serves me correctly, this painting is in the film. To bad my only copy of the video is VHS; I don't currently have any way to check.

personally, I see these as afternoon tea on the roof top. Love it!