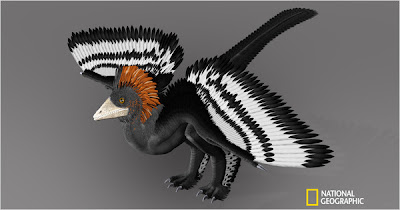 When we think of the art of classical antiquity, certainly Greek Classic Art, we think of somber, pure white marble sculptures. Likewise, when we think of the Renaissance, especially the Italian High Renaissance, we conjure up balance, restraint and idealization. But a performance and two exhibitions (unfortunately, only one still ongoing) remind us how important theater and theatricality were.

The Sackler Museum at Harvard had an exhibition a couple of years ago, “Gods in Color: Painted Sculpture of Classical Antiquity.” It was a show of about a dozen scientific reconstructions of what Greek Classic sculptures really looked like. I unfortunately missed the exhibition by one day, but the reproductions I saw in the catalog were mind-blowing (see below). Not only were Greek Classic sculptures painted, but they were painted in garish, bright colors and flashy patterns. And don’t forget, these works were settings for grand theatrical events -- the Panathenaic festivals and processions 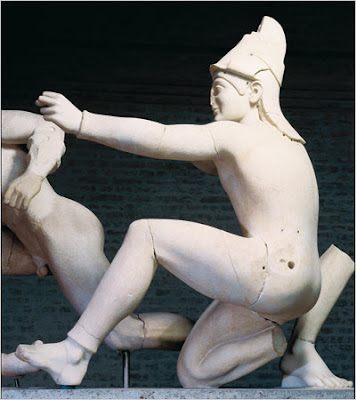 Reconstruction of a Trojan archer from the west pediment of the Temple of Aphaia on Aegina ca. 490-480 B.C, in "Gods in Color" at Harvard's Sackler Museum

More recently, in a one-day event, film director Peter Greenaway used theatrical lighting to create the illusion of light shining on Leonardo’s Last Supper (c. 1495-1498) from a now-bricked-up window of the refectory of Santa Maria delle Grazie. That is, Greenaway re-created the window, light and shadows that existed when Leonardo was painting the fresco and that he used to reinforce the perspectival illusion. Witnesses were astounded at how miraculously three dimensional this made the painting look. 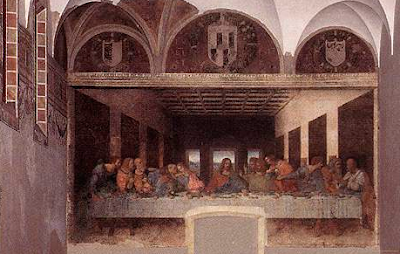 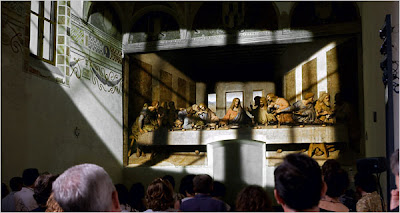 The Last Supper, even the ruin we know today, is extravagantly theatrical: it’s very large (about 15’ x 29’) and Christ and apostles are on an elevated plane, like a proscenium stage, that realistically continues the space of the room In addition, the original was flamboyantly colorful. This can be seen in a digital reconstruction of The Last Supper created by the media company, Leonardo3 (see below). Not only are the colors bright and contrasting but, similar to Classical sculpture, Leonardo painted brightly colored and elaborately patterned tapestries on the walls. When the work was in good condition, before it deteriorated and was vandalized, and before a door was installed below Christ, it must have felt like you were in a dining hall having supper with Christ and the Apostles, witnessing a highly agitated and dramatic moment -- when Christ told them “one of you will betray me.” 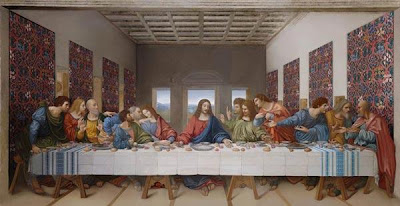 This theatricality and staginess shouldn’t be surprising since Leonardo was very involved with theater. He designed a revolving stage in 1490 (never built), and arranged the settings, masks, and costumes for wedding celebrations, parades and festivals. He even made a mechanical automaton lion for the the new King of France, King Francis I, on the occasion of his solemn entry into Lyon in 1515 (see below). The robot lion took a couple of steps, kneeled on one knee and pulled open its chest with its paws, revealing a profusion of golden lilies. A reconstruction of this lion, and many of Leonardo’s other inventions, as well as the high resolution digital reproduction of the Last Supper discussed above, can be seen in the exhibition: Leonardo Da Vinci’s Workshop, Discovery Times Square Exposition, 226 West 44th Street, until March 14th (tickets are about $20). The exhibition is an odd combination of serious scholarship and commercial hype (it’s in the same space as a Titanic artifact exhibition) but well worth a visit. Besides, it’s a look at what museum exhibitions might be like in the future (material for another post). 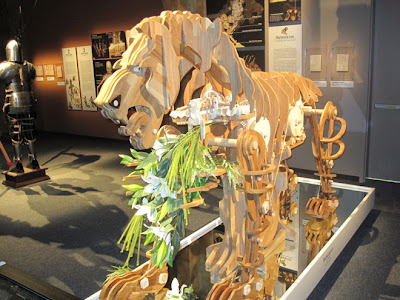 Posted by Charles Kessler at 11:38 AM

thanks for the post on the Last Supper. We are studying that at Prep and I plan on showing then this article.

Very interesting! Thanks for shedding light on the Last Supper, plus the pics are beautiful!

It is very good paintings for the sharing. I like it very much as well as your blog also. Keeps it up good work!!!!!!!!!

Charles,  I like what you have to say about the Last Supper as proscenium stage. I've always wondered about the disconnect between da Vinci's desire to push the illusion of real space and the space he actually depicted. The refectory is a narrow, tall room with a vaulted ceiling, and yet, da Vinci's space is classical and boxy with a flat, coffered ceiling. The mismatch makes no sense unless da Vinci wanted to evoke a "staging" of the Last Supper. If he had tried to continue the architecture of the refectory into the painting as if the Last Supper was taking place in the refectory, the church authorities might well have objected. The observant cannot be participants, only viewers.

The refectory as a theater doesn't seem a stretch. The power of da Vinci's illusion may thus be felt fully with no ambivalence. The brothers witness a re-enactment at each meal just as prayers are offered anew at each meal.

I am fascinated by that uneasy line in Renaissance and Baroque art on the proper place for Patrons in the artwork they financed of religious figures and events. They may be shown, but only on the periphery, allowed to witness, unremarked by the halo'ed. I always liked the obstreperous Cornaro clan, though, doing their best to upstage the Ecstasy of St Theresa.
http://en.wikipedia.org/wiki/File:Cornaro_SM_della_Vittoria.jpg

One could be cast in a supporting role such as Michelangelo portraying Nicodemis in his Florentine Pieta 50 years later. I am always kind of shocked how conspicuously Nicodemis/Michangelo's bare hand grabs hold of the bare arm of the fallen Christ with no cloth in between as iconographical decorum warrants.

I'm curious where you go next with these ideas. This is a good opening. The Greenaway is beautiful.

fyi, this is a link to see the room virtually. I never knew there was another painting at the other end.
http://milan.arounder.com/en/churches/santa-maria-delle-grazie-church/leonardo-s-last-supper.html

thanks for making me think.

The bird's cute, Charles. It looks like a Casio keyboard made for Fred Flintstone.

About the suggested decoration of the Parthenon marbles, I have to disagree. I buy the gaudiness, but not the busyness of the design.

The sculptures' theatrically broad gestures are designed to play clearly to a well-sited, but necessarily distant viewer (a couple hundred ft, I'd think, to mitigate foreshortening). The amount of painted detail shown here at best would have been undiscernible and at worst would have obscured the comprehension of the figures.

It's also quite possible that the statues were re-painted yearly as a way to excite and surprise the "same, old" crowds. This amount of detail might have been unnecessarily expensive.