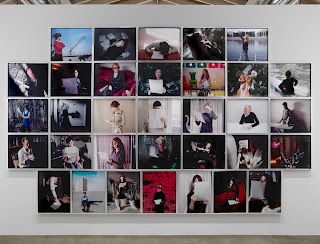 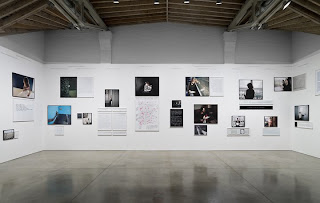 ©Sophie Calle/ARS. Courtesy of the Paula Cooper Gallery, New York. Photo: Ellen Wilson
I meant to post this when the exhibition was still on view but, good intentions simply being what they are, I got a little side-tracked. Bad blogger! Perhaps there are some of you out there who wouldn't mind thoughts after-the-fact...

Sophie Calle has a history of creating works of art that test relational boundaries. Her newest show at Paula Cooper, the first US presentation of the exhibition selected to represent her native France at the 2007 Venice Biennial, continues the artist’s tradition of challenging our definition of public and private space—while still managing to be fun.

“Take Care of Yourself” is an exhibition inspired by a seemingly impossible break-up email Calle received from a former lover. The translated letter: convoluted, hyper-intellectualized, full of subtle blame-filled phrases, is the first thing you pick up as you walk into the gallery--it’s not the original (that’s in French) but this translated version, duplicated with all the telltale streaks left by a cheap photocopier, feels like it could have come right out of the printer. We read the letter.

Now beings an exercise in empathy (or in some cases, empathic rage). Calle sent copies to women all over France, asking them to develop a response and send it back. She solicited the opinions of lawyers, psychologists, secret service agents, singers, sharp-shooters; all of whom were either photographed or filmed reading the letter, performing it, destroying it, memorizing it, dissecting it. They, as much as the mysterious “x” (the sender remains anonymous) become characters in an emotional pantomime, as Calle puts her own personal experience on stage and invites us to commiserate.

She steps back and lets others play the lead—and that is what keeps the ensemble of vignettes from becoming overly mired in self-reflection. It feels like each piece is a part of a larger attempt to analytically classify her own feelings through the responses of others—like Calle was so thrown by this bizarre form of separation as to have literally needed to engage in a worldwide examination of its possible meanings. Not to say that there isn’t an element of stick-it-to-him-ness to the show (nothing like a universal, public denouncement of personal ineptitude to make melting into the floor seem like a pretty good option for Monsieur “x”), but Calle avoids making “the breakup” an international soap opera.

What is odd about the show is that none of the written responses that Calle received from other women are translated. The texts of these often hand-annotated, color-coded return letters are blown up and hung below the photograph of the women who sent them, becoming purely aesthetic elements rather than meaningful writings. Yet they’re not gibberish: one lawyer describes how Calle’s ex could be considered in breach of contract for misrepresenting himself as a writer when the poor quality of word choice and syntax in his letter practically refute that claim; another highlights the number of times “x” switches from formal to informal personal pronouns (another grammatical zing). These documents do enhance the overall show experience, but not being able to understand them does not necessarily detract from Calle’s fundamental exploration of collective empathy. The point here is not arriving at an ironclad breakup conclusion, but working though the emotional consequences, both real and imagined, of a hurtful (and slightly absurdist) situation. Calle is a conceptual artist; her visual products are ultimately secondary.

What made the show for me was Calle’s video of her and “x”’s letter at an appointment with a conflict mediator. As Calle explains the circumstances surrounding her breakup with “x”, I couldn't help but be touched by her honesty, her genuine search for closure, and her own desire to document something that would normally be lived out quietly in private. Not to mention her carefully controlled hatred of “x”.

I'd say "see it", but you can't and I'm sorry. But you can wikipedia her.
Posted by Irene Borngraeber at 9:57 PM