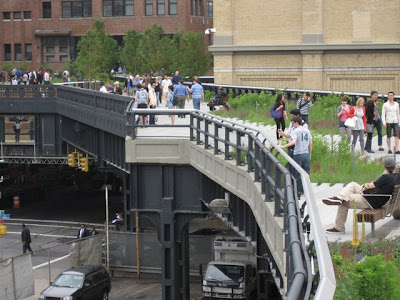 (Click on a photo to enlarge it)
For those of you who don’t know, the High Line is an elevated steel railway trestle built in the 1930’s. It runs along 10th Ave. from Gansevoort Street in the Meatpacking District, through the gallery area of Chelsea, and ends at 34th Street. After 10 years of lobbying, fundraising, planning and construction by the Friends of the High Line, the first of three sections of the old railway has been converted to an elevated promenade, and it far surpasses my highest expectations.

I’ve been following the progress of the High Line since its beginning, and all the drawings and photos I saw didn’t prepare me for the experience itself. The intentionally ragged beauty of the landscaping, the attention to delightful details, the surprise of seeing familiar streets from a different angle, and the tranquility in spite of the parade of people -- they all contribute to create a magical promenade reminiscent of Central Park when Christo’s Gates were there. 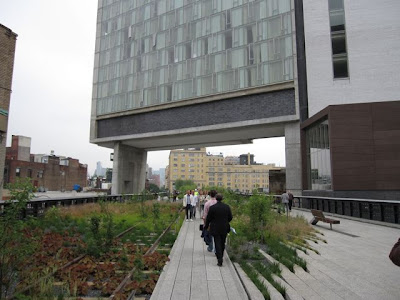 The new Standard Hotel literally straddles the High Line at 13th Street.
Serrated paving suggests weeds growing through cracks in the pavement.
A lot of the credit goes to landscape architects James Corner Field Operations, and architects Diller Scofidio + Renfro. They kept some of the scruffiness of an abandoned rail line by using mostly wild, native plants, many from species that originally grew there when the line was abandoned, and integrating it beautifully with refined paving details, elegant street furniture and the existing structure. As Nicolai Ouroussoff writes in the Times, “It is one of the most thoughtful, sensitively designed public spaces built in New York in years." 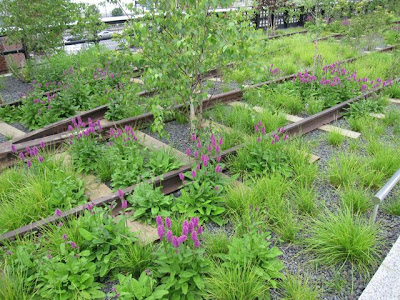 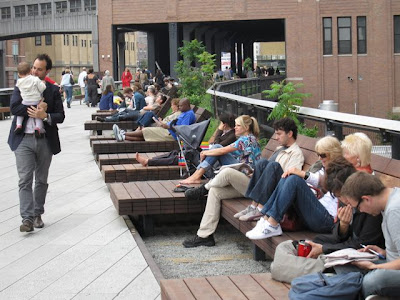 Here’s an example of the simple but elegantly designed street furniture.
Some of these lounges are on wheels on the tracks. 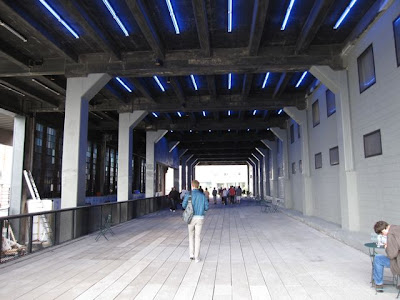 The light in this tunnel changes according to the weather. It’s a dim blue now
because the weather was cloudy, but it got brighter when the sun came out. 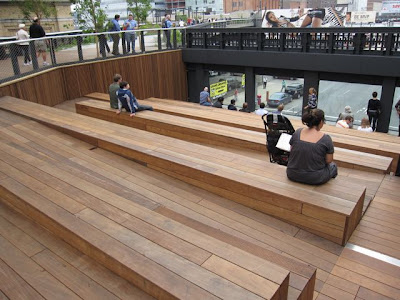 Typical of the ingenious and playful architectural ideas is this amphitheater
carved out of a side track spur. The windows overlook 10th avenue.
I want to go back soon. The water feature, a sort of reflecting pool/stream, wasn’t working when I went; and I also want to see it at night. The lighting is intentionally kept below waist level so it illuminates the pathway without interfering with the view of the city and the night sky.

The High Line is open from 7:00 AM to 10:00 PM daily.
The best place to enter is at the park’s southern end, at the corner of Gansevoort and Washington Streets in the Meatpacking District near where the Whitney will be building a satellite designed by Renzo Piano. Elevator service is available at 16th Street.
The High Line website: http://thehighline.org/ or call (212) 500-6035

Next: Jersey City’s own Railway Embankment.
Posted by Charles Kessler at 3:41 PM

This is so beautiful--and inspiring to see how the architects worked with the original quirky aspects of the railroad! I may even like this better than the Arcades.

Can you imagine if the JC embankment was reclaimed with this degree of innovation!? Embankment people- reach out to these Highline folks: they'll even have an art gallery...sigh