A Selection of Bushwick Exhibitions - Part 1

Here are highlights from the 19 Bushwick galleries I went to last week. I tried to get at least one good photo of each; a closeup detail, if I thought it might be useful; and an installation view to give you a sense of the scale of the art. Most of the gallery websites have additional images and information about the art.

Since there are 63 Bushwick and Ridgewood galleries listed on the excellent and comprehensive BushwickGalleries.com, this roundup is far from complete. More highlights will follow soon.


SOHO20, 56 Bogart, Ann Young Water:Color, and Kathy Stark In Plain Sight (through November 9th). This gallery is new to Bushwick, but it has been around since 1973. They focus on women artists.


Theodore:Art, 56 Bogart, Ready for Mayhem: Scooter LaForge and Bill Mutter (through December 6th). This is a two-person show, but the work goes so well together I originally thought it was a collaboration.


Studio 10, 56 Bogart, Meg Hitchcock, VERBATIM (through December 20th). Hitchcock laboriously cuts out letters from a sacred text and uses them to make a design and another text.


Robert Henry, 56 Bogart, Elise Engler: A Year on Broadway (through December 20th). Using gouache, watercolor and colored pencils, Elise Engler spent a year documenting every block of Broadway – all 13 miles of it. 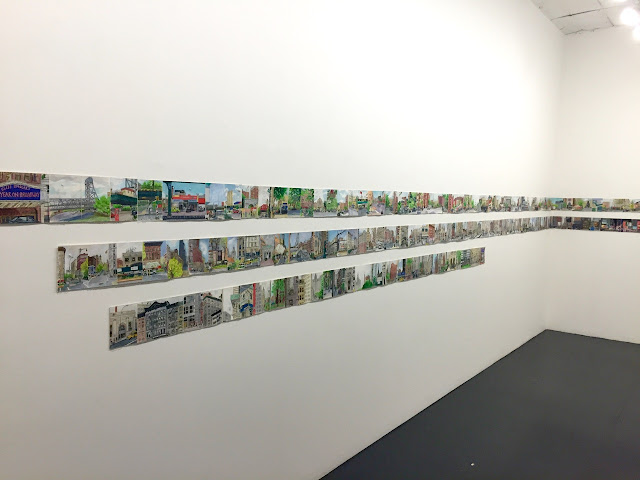 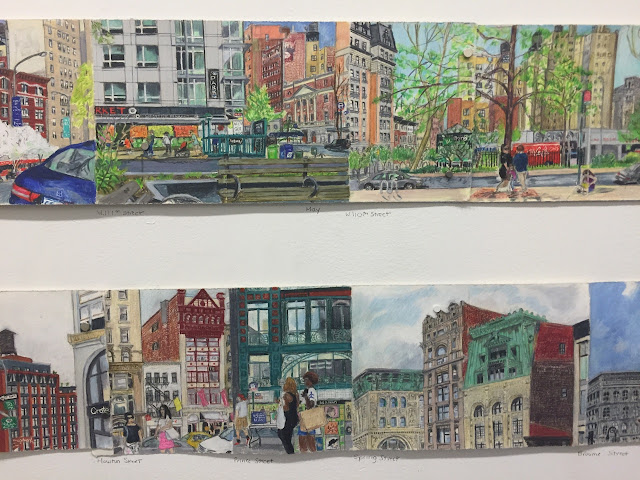 CLEARING, 396 Johnson Avenue, Eduardo Paolozzi, Horizon of Expectations (ended October 31st). Eduardo Paolozzi, who died in 2005, was a British artist active in the second half of the twentieth century. He will have a major retrospective in 2016, organized by the Whitechapel Gallery, London.


Odetta, 229 Cook Street, Seeing Sound, work by Jane Harris, Alex Paik and Gelah Penn (through November 1st). The work I liked most in this three-person exhibition was by Alex Paik. The colored reflections off the ribbons of paper create a hazy atmospheric perspective that results in a sense of depth.

Halpern's video/film installation is multi-layered. A 2 ½ minute hand-processed color film of pages from the 1958 novel The Leopard by Giuseppe Tomasi di Lampedusa, and footage from the 1963 movie of the same name directed by Luchino Visconti, are projected onto a laptop screen on which a video of the famous 45-minute ballroom scene is playing.


There were three excellent group exhibitions that involved many artists, and all of them were in small spaces.

Underdonk, PAUL KLEE (through November 1st). This is an exhibition of relatively small work by twenty artists who have some affinity to Paul Klee. Some of the artists are well know, such as Brenda Goodman, Jonathan Lasker, Dona Nelson, Carl Ostendarp (who really didn't fit), and my favorite ceramic artist, Joyce Robins.

Posted by Charles Kessler at 9:09 AM