Sculpture in the Age of Donatello

Sculpture in the Age of Donatello is at the Museum of Biblical Art (1865 Broadway at 61st Street, through June 14th). All the work in this exhibition was made in the first decades of the fifteenth century for the Cathedral of Florence ("The Duomo"); and it's all on loan from the Museo dell’Opera del Duomo (the Duomo Museum) while it undergoes renovation and expansion. The exhibition consists of twenty-three sculptures by the early Renaissance artists Brunelleschi, Nanni di Banco, Luca della Robbia, and, most impressively, by Donato di Niccolò di Betto Bardi, a.k.a. Donatello.
This is a rare opportunity for Americans to see Donatello's sculpture – the only one in the country I know of is Madonna of the Clouds, ca. 1425-35, a small relief in the Boston Museum of Fine Arts.
The Museum of Biblical Art is not exactly on the art world map – I would pass it sometimes when I went to Lincoln Center, or to a movie in the area, but I never went in. So it's surprising that this small, little-known museum is not only a venue for this blockbuster, but the sole venue. It was the only institution that could accommodate the time schedule of the Museo dell’Opera del Duomo. There's something wrong when our art institutions are so inflexible that they have to pass on a major exhibition of early Florentine Renaissance sculpture as extraordinary as this.

The museum's exhibition space is relatively small, but the installers managed to keep the space from feeling crowded or claustrophobic. Because the sculpture stands are the same warm white color as the walls, things don't feel busy; and because semi-transparent scrim curtains are employed to define separate areas, viewers can focus on one or two works at a time and still feel a sense of openness.

Let's start with the greatest work in the exhibition, and one of the greatest sculptures of all time: Donatello's Prophet, know by its nickname “The Zuccone” (meaning pumpkin head or bald head).
I find it awe-inspiring and mysterious that a large hunk of carved stone can have such a powerful emotional impact. I guess it has something to do with our empathizing with the sculpture as if it were a real person –  a person in this case who is a gaunt 7-footer, with a bald head, sinewy limbs, and who wears voluminous heavy drapery – a person with the stern, ascetic presence and uncompromising nature of the Old Testament prophet he was.
And it's not only the person depicted that produces this emotional impact; it's abstract elements as well. The rough-hewn quality of the stone imparts a sense of solidity and heaviness, and the sweeping, soaring curves of the drapery add to the exhilarating drama.

The Zuccone was originally placed in the Duomo bell tower 70 feet up in the air. In order to keep the sculpture looking monumental and formidable from that distance, Donatello elongated and narrowed the body, making it seem even taller than it actually is. And the head is small relative to the body, making it appear even further away from the viewer. (See the photo below which I took from as low as I could manage.) This elongation is reinforced by the vertical lines of the drapery whose folds converge like railroad tracks to create the illusion of even more distance.
While The Zuccone and other sculptures in this exhibition are very big, they're not colossal. The figures are big enough to be extraordinary, but not so big that they couldn't be credible as real people.

This charming pair of sculptures illustrates The Annunciation  – the announcement by the angel Gabriel to the Virgin Mary that she would give birth to Jesus. Mary looks as if she's saying, "Oh, go on!" and the angel Gabriel is saying, "Hold on a minute while I explain." That we're able to read human emotion in these figures is a radical departure from the otherworldly art of the medieval period, and it's the main change brought by the Renaissance.

The Sacrifice of Isaac  (also known as The Binding of Isaac) is, of course, the story in Genesis in which God tests the Patriarch Abraham by commanding him to sacrifice his only son, Isaac. At the last minute, an angel stops the sacrifice and tells Abraham, "Now I know you fear God." Most artists before and after Donatello chose the moment when the angel of God stopped Abraham from killing his only son; Donatello chose a less dramatic a moment – after the angel interceded and Abraham withdrew his knife. Perhaps Donatello chose this moment to put more emphasis on Isaac, whom he portrays without anguish or fear, calmly accepting his fate – a reference to Jesus accepting His fate.

[There's an interesting discussion here (halfway down the page) about Kierkegaard and Sartre's perspectives on this story. Some of the questions the two philosophers posed are: Does Abraham have a free will to decide what to do? How could Abraham be sure it was a real angel? How did he know the command really came from God and not the devil? And why didn't it occur to Abraham that he might be going crazy?] 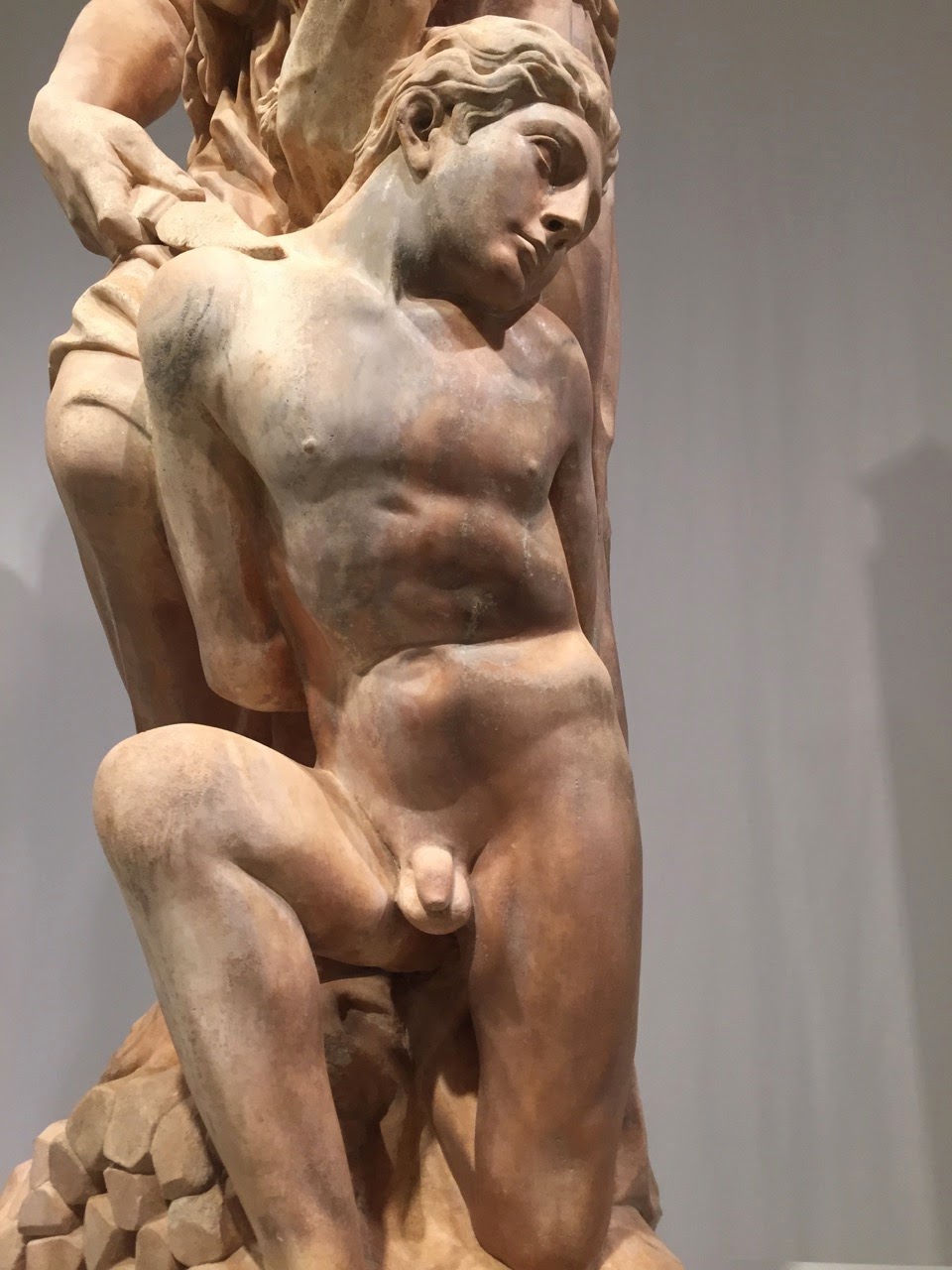 Can you spot an anachronism in Donatello's representation of Isaac?


An "Evangelist" in this context (with a capital "E") is an author of a Christian gospel, not someone who proselytizes. Both figures are formidable and monumental (seven feet seated!), and both figures seem lost in thought, perhaps listening to the word of God. But Nanni di Banco's St. Luke is more serene and classical (note St. Luke's Roman-like hair and beard), whereas Donatello's St. John is dramatically expressive down to his toes.
Originally, Donatello's St. John the Evangelist was prominently placed to the right of the main portal of the Cathedral of Florence where, one hundred years later, Michelangelo would have seen it every time he passed by; it no doubt influenced his Moses.
As if Sculpture in the Age of Donatello isn't reason enough to make a trip to the Upper West Side, there are two other important exhibitions within a few blocks of the Museum of Biblical Arts. The American Folk Art Museum has a show of multi-media art by folk and outsider artists that Roberta Smith favorably reviewed here; and the Museum of Art and Design has an excellent Richard Estes exhibition.
Posted by Charles Kessler at 4:29 PM

Donatello, WOW! Hard to imagine writing about Donatello. You did a real good job, but I can imagine you had to summon some chutzpah to pull it off.

Thanks Carl, but no credit due. In this case, I'm too ignorant to be intimidated!