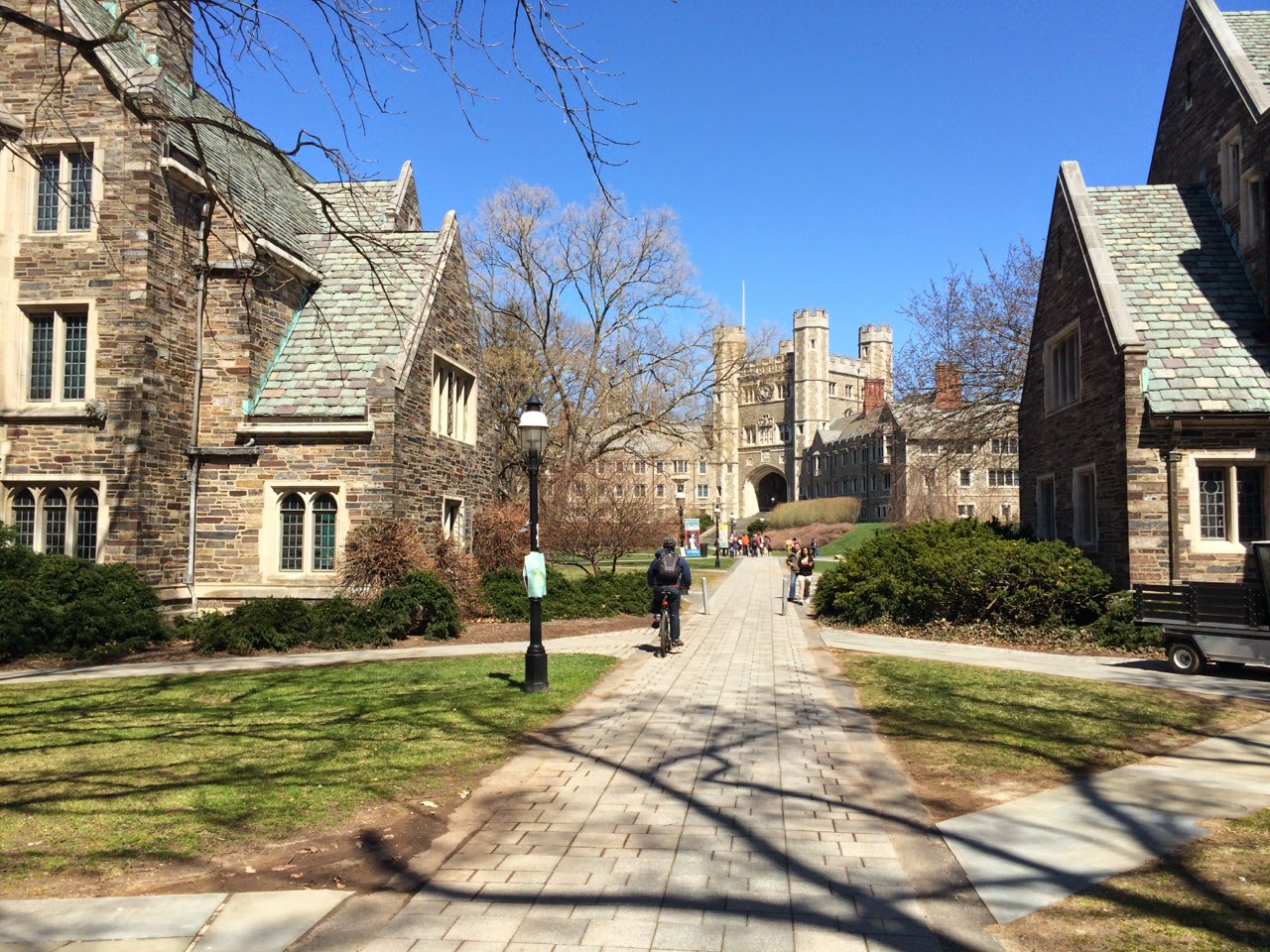 The Princeton campus is so beautiful it doesn't seem real. But why is it that college art museums, this one included, are so often the least interesting (if not out and out ugliest) buildings on college campuses?
The exterior of the Princeton University Museum of Art is your basic humdrum modernism; and the interior is a confusing labyrinth. The lower galleries, where the Asian, African, Ancient and Art of the Americas (pre-Columbian and American Indian) are exhibited, are poorly lit, and the installations are old-fashion. According to Lehze Flax, the designer at the museum, they plan to upgrade the lighting and installations. I hope this happens soon.
In addition to an inadequate building, the website for the museum is difficult to navigate. Even when I had all the relevant information to search for a painting or drawing in their collection, including the accession number, it was easier to use Google than search the museum's own website. More troubling, the site lacks sufficient information on their art – surprising for an institution of this caliber.

For all that, the museum has a first-rate encyclopedic collection of about 72,000 works. It's perhaps not up to the lofty standards of Yale with 200,000 works in the collection, or Harvard with 250,000, but it's still pretty damn impressive. (BTW, the extensive renovation, expansion and integration of all the Harvard Art Museums opens on November 16th.)
Princeton has a large collection of outstanding ancient Chinese art.
Lamps like these (above) were found in ancient burial sites and it's thought that the light was used to guide the deceased soul into the afterlife, or possibly to embody the soul of the deceased during the funeral ceremony. I am struck by the ceremonial stateliness of the top half this strange object, in contrast to the informal naturalism of the bottom half.


Han dynasty glazed horses this big are extremely rare, and this one may be the largest of them – plus it's in excellent condition. As simplified and abstracted as the design is, the horse still feels vital and alive.


Lóhàn, like bodhisattvas, serve as intermediaries on the path to Buddhist enlightenment. They protect the Buddhist faith until the coming of Maitreya, the prophesied enlightened Buddha. The rather unusual idea of portraying a lóhàn as an ascetic probably had its genesis in the story of the Buddha seeking enlightenment through intense and prolonged meditation under the Bodhi tree.

Princeton also has a large collection of pre-Columbian and American Indian art, including this beautifully preserved 500-year-old Mayan container. It gives you some idea how brightly colored these sculptures originally were.


This breathtakingly beautiful headdress represents a young woman entering maturity. Dancers would wear it on top of their heads when performing celebrations and rituals. Young girls transitioning to womanhood wore extravagant coiffures like this at their coming-of-age ceremonies.


This painting is one of the first times Saint Anne, the Virgin Mary's mother, was depicted in Italy. One hundred and fifty years later, painters such as Leonardo Da Vinci would make Saint Anne more human, if idealized, but here the medieval tendency toward the otherworldly and abstract still holds. Saint Anne, as Traini depicted her, is formidable, not to say scary – very much the protector of her very special daughter and grandson.


This painting has all the characteristics of super-refined Florintine Late Mannerist painting: elongated figures, contrived gestures, shallow space, and ethereal, acidic color. Carlo Portelli was famous in his time; Vasari, a contemporary of Portelli, mentioned him in his biographies of Renaissance artists, Lives of the Most Excellent Painters, Sculptors, and Architects. For some reason, however, Portelli is no longer placed among the best of the Mannerist painters such as Pontormo, Rosso Fiorentino and Bronzino. I think for his early work alone, he belongs in that company.

I love this odd little painting. Ingres made many drawings and small preparatory studies such as this one, to prepare for large paintings. He did not consider them as unique works of art, but rather they were working aids that he kept in his studio to refer to.

Manet was attracted to the transgressive nature of gypsy women, as opposed to respectable French women of polite society, so he must have enjoyed the woman's nonchalant, saucy pose, especially the cigarette dangling from her lips. And this close-up detail of the horse shows Manet's bravura brushwork at its best.

The main reason I went to Princeton this time was to see 500 Years of Italian Master Drawings from the Princeton University Art Museum (until May 11th). The exhibition, organized along thematic lines, includes about 100 drawings by such great draftsmen as Parmigianino, Guercino, Giambattista Tiepolo, Michelangelo, and Gianlorenzo Bernini, and extends into the early 20th century with drawings by Amedeo Modigliani.
I reproduced this Michelangelo drawing extra large so it would be easier to see the comical drawing in the lower right of a grotesque old man looking up (longingly?) at the beautiful young man.

Luca Cambiaso is another artist that was famous and influential in his time, but is under-appreciated today. (Princeton seems to have collected a lot of these artists.) Luca Cambiaso was one of the originators of the sketchy, economical drawing style reproduced above. He made a large number of drawings which he considered to be unique works of art in themselves. He sold some, gave some away to friends, and kept many for his own enjoyment.

Known as "il Guercino" because he was cross-eyed, Giovanni Francesco Barbieri was self-taught and, because of his lively style, inventive narratives, versatile draftsmanship, and prodigious production, he became one of the most influential painters of the Italian Baroque period. Like Caravaggio, he focused on expressive faces, theatrical gestures and dramatic lighting.

Tiepolo's paintings are inventive, grandiose and theatrical. He is arguably the greatest painter of eighteenth-century Europe – he certainly was the most prolific. He was renowned for his extreme facility and for how fast he could paint. In his drawings, he was a virtuoso of the swift, continuous and economical line that determines contour, and subtle washes that create light and volume. And, as the reproduction above demonstrates, he was a master of caricature.


If you go to the Princeton University Art Museum, I recommend taking a free, student-run, one-hour tour of the Princeton campus. Check here for information about it.
Posted by Charles Kessler at 6:08 PM