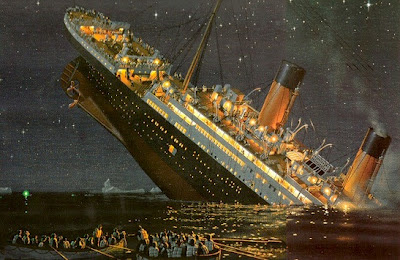 Tsuris at the Los Angeles Museum of Contemporary Art (MOCA):
Your Essential Guide to MOCApocalypse 2012 by Jillian Steinhauer, Hyperallergic art blog, is

the best summary I've found about the MOCA shipwreck. The post contains links to the most important articles about this on-going fiasco.
Jeffrey Deitch's stewardship wouldn't be such a catastrophe if there were more alternatives in Los Angeles.There's nothing wrong with a graffiti or a disco show, or a show curated by James Franco, unless it's to the exclusion of more challenging exhibitions. Unfortunately, LA still doesn't have enough contemporary art venues to fill the void. When the Guggenheim turned populist under the direction of Thomas Krens and did shows like The Art of the Motorcycle, it wasn't to the exclusion of other contemporary art exhibitions in New York. In fact the Guggenheim's shows added variety to the art scene and stirred up controversy (always a good thing). As big as the LA art world has become, it will be devastating if MOCA continues the way it's been going, or worse, retrenches or closes.

The Boston MFA receives rare Benin art:
New York collector Robert Owen Lehman, son of the prominent banker, gave the Museum of Fine Arts in Boston 34 rare West African Benin sculptures that he collected between the 1950s and the 1970s. But the Huffington Post recently reported that the National Commission for Museums and Monuments in Nigeria is demanding the return of 32 of the pieces which it says were looted during the Benin Massacre of 1897. Is there a statute of limitations?
Two chronicles of 70's and 80's New York art:
Whitney Kimball's interview with Alan Moore for the art blog Art Fag City gives a taste of the East Village in the early eighties. This is the first of several future interviews with people involved with ABC No Rio, the trailblazing East Village alternative space. If the interview peaks your interest, check out ABC No Rio Dinero, a book Moore co-authored with Marc Miller.
And the David Zwirner Gallery finally published the exhibition catalog 112 Greene Street: The Early Years (1970-1974) about the influential Soho alternative space that some consider the first. The Times reviews the catalog here.


Arts Graduates Find Their Way to Jobs and Satisfying Lives

Who knew? A study of more than 36,000 arts alumni of 66 institutions in the United States and Canada shows people with arts degrees are generally satisfied with their educational and career experiences. 82% were satisfied with their ability to be creative in their current work; only 4% of respondents report being unemployed and looking for work; and 86% of those with a master’s degree in the arts as well as 71% with a bachelor's degree have worked as professional artists.

On a sad note, Hrag Vartanian, the energetic publisher of Hyperallegic, reports UNESCO is alarmed at the threat to the place of his birth, the Old City of Aleppo, Syria, a World Heritage Site since 1986.
Posted by Charles Kessler at 3:56 PM