The Times reports how this design turned into a controversy, but I like it as a tribute to Steve Jobs more than Chris Thornley's "original" version.

Pacific Standard Time (PST), the enormous series of exhibitions (170 exhibitions at 130 museums and galleries) that explores and celebrates Southern California's art history has begun with a bang and will continue banging for the next six months. The Art Newspaper has an excellent article on how the Getty Research Institute and the Getty Foundation joined forces to become a catalyst for this ambitious enterprise.

According to the New York Times, Dave Hickey thinks it's corny, boosterish and largely unnecessary, and maybe he's right, but I'm glad they're doing it. Under-appreciated artists like John McLaughlin are getting their due, and attention is being paid to long-ignored aspects of LA's history. I hope to see some of it.

Another bit of good new for Los Angeles: The Los Angeles County Museum of Art (LACMA) has partnered with The Motion Picture Academy to create a new movie museum.  Los Angeles, amazingly, does not have a major museum devoted to film, and now one will be established near LACMA in the old 300,000-square-foot May Co. building.

The Guardian reports art historian Martin Kemp has proven that what Christie's rejected as a "20th-century fake" is really a lost Leonardo masterpiece torn from a 15th-century portfolio.


Against the odds, Kemp tracked the volume down, to Poland’s national library in Warsaw; the stitch-holes are a perfect match for those on La Bella Principessa, a portrait in ink and coloured chalks on vellum. It is overwhelming evidence, Kemp says, that the portrait dates from the 15th century – and not the 19th century, as Christie’s thought when it sold it in 1998 for £11,400 (it could fetch £100m as a Leonardo).

I was pleased to read that a former teacher of mine at UCLA, Leonardo scholar Carlo Pedretti, agrees with the attribution. Good to see he's still in the game.

I remember Pedretti regaling us with his attempts to deal with the Italian bureaucracy in order to get permission to look behind a Vasari fresco in the Palazzo Vecchio in Florence to see if Leonardo's famous Battle of Anghiari is still behind it. This was in the sixties, and, according to a recent Times article, they're still trying.

The Clyfford Still Museum is set to open in Denver (of all places) on November 18th. It will house a mind-boggling 94% of the artist’s total output -- 825 paintings and 1575 works on paper.  The Wall Street Journal reports that Dean Sobel, the museum director, has a chance to rewrite American Art History. Sobel says, "The goal for us is to put Still back in, to show the greatness of him and that he was the great innovator of the movement. He creates Abstract Expressionism before all the others." And Tyler Green, one of my favorite art bloggers, is already at it with a three-part article on Clyfford Still, here, here and here. I hope they succeed. I love Still.

Art Review Magazine has just published its list of the top 100 powers in the art world. If you care, Ai Weiwei beat out Larry Gagosian for number one.

And finally, via The New York Observer I found out about crochet street artist Olek's latest: 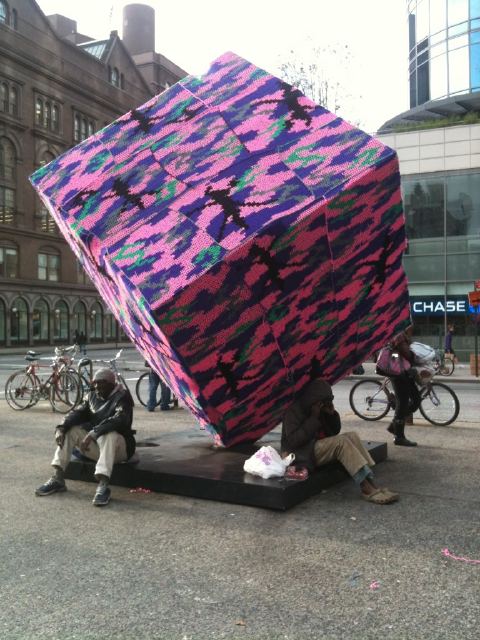 I haven't seen it yet, but I'd guess it's somewhat of an improvement over the original (below) -- at least until it gets raggedy.

Posted by Charles Kessler at 5:24 PM