Chelsea:
Richard Tuttle’s show at Pace Gallery is over, but it looks like his influence has now extended from the Lower East Side to Chelsea. I suspect it’s because Chelsea galleries usually have group shows of younger artists in the summer — but whatever. The best of the shows, my favorite anyway, is a semi-retrospective of B. Wurtz at Metro Pictures (Wurtz is represented by the gallery Feature, Inc.) through August 5th. I say semi-retrospective because Metro Pictures chose to show only one aspect of B. Wurtz’s art — maybe the Whitney will do a fuller exhibition some day. This work is influenced by Tuttle at his best: inventive, subtle and joyous.
Other examples of Tuttle’s influence: The Andrea Rosen Gallery has a sculpture in her back room that I actually thought may have been a Tuttle but turned out to be by Elliott Hundley; most of the work in D’Amelio Terras’s group show, Affinities: Painting in Abstraction; likewise, a fun show at Casey Kaplan called Everything Must Go; and CRG’s summer sculpture show (they moved to a new space at 548 W. 22nd).

Two other shows I liked are The Women in Our Life at Cheim & Read (until September 17th), an anniversary exhibition of women they have shown over the last fifteen years — and they’ve shown some of the greats; and Im Schatten der Made (In the Shadow of the Maggot), a zany exhibition of a John Bock video that looks like an old-time movie, and the props he used in the video. It’s at Anton Kern until August 12th.

Lower East Side:
Like Chelsea, there are mainly group shows on the Lower East Side -- and it’s a chance to see some new faces. A wide-ranging show of ceramics titled Paul Clay (awful pun) at Salon 94 Bowery (until July 30th) was reviewed by Roberta Smith and has received a lot of attention. This is an excellent show, but I agree with Smith: why is it that ceramic shows are so crowded? It makes everything in this show, with the major exception of Jessica Jackson Hutchins's piece, look like chachkies.
The New Museum just opened a God-awful show, Ostalgia, (until September 25th). Ostalgia is a term used to describe a sense of longing and nostalgia for the era before the collapse of the Communist Bloc. It’s an ambitious show, I’ll give it that. It includes more than fifty artists from twenty countries across Eastern Europe and the former Soviet Republics. One work made the show worthwhile for me, however: Victor Alimpiev’s video of the faces of two opera singers, one singing corrections of breathing technique into the other’s ear. They are singing about singing and it’s tender, haunting, lyrical and beautiful.
The Stephan Stoyanov Gallery presents another well-crafted video (things are getting better in that respect), this by Cliff Evans, and it's a unique one. Unfortunately the gallery’s site doesn’t provide any images, or even any information about the work, but you can see a typical example on Evans's website. The video is a composite of animations that flow together to create a complicated moving landscape. It's dense and complicated, but not hysterical in the way Ryan Trecartin’s work at PS1 is. I especially love the odd vertical shape (about 24” x 12”) of the video. It makes it more of a thing.

UPDATE: Cliff Evens sent me a photo (below) from the video, and it's a beaut. It's still important to go to his website to see how it works. 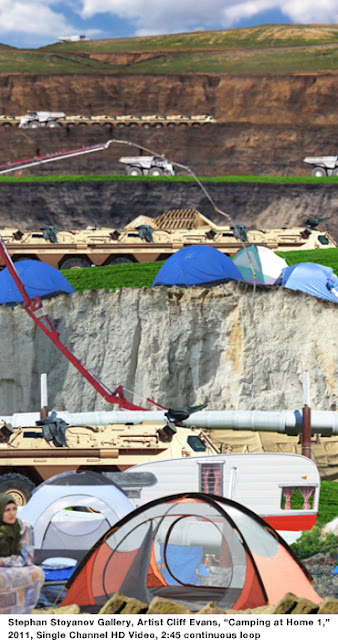 Finally, there are good group shows at Feature and Rachel Uffner Galleries; and Mulherin + Pollard Gallery opened a space at 187 Chrystie Street, at the end of Freeman Alley off of Rivington.
Posted by Charles Kessler at 6:14 PM

Based on the installation photo of the Paul Clay show, I'd have to say it's pretty appalling. All of the pieces are so lumped together that it's impossible for any one of them to be evaluated on its own. I can't imagine a sculpture show of any other medium having works displayed crowded together all at the same level regardless of optimal view for each.

Also, and this may be unfair since I'm mainly responding to what I can see in the photo, some of the work looks as if it were made in a first semester ceramics class. It seems that in this exhibit, as in others I have seen over the years, the ability to assess the merit of a work is somehow stymied when the medium is clay.

I agree. There is something disrespectful about the installation. There was some terrific work in this show, but it was mixed in with some junk as if it's all the same.

Ceramics is has become popular with many young artists, I hope the people who show it shape up.