There’s not a bit of art to see in New York so I thought I'd go down to Washington for the day and see Gauguin, Maker of Myth at the National Gallery (until June 5th), and Philip Guston, Roma at the Phillips Collection (until May 15th).  I soon realized I'd need at least two days to see all the other shows in Washington now. And of course there are the permanent collections of all those great museums. It was an exhilarating and exhausting two days!  Here are some brief thoughts and a photo diary of some highlights of my tour.

But before I start there's something I'd like to get off my chest — something I find both baffling and exasperating. Why is contemporary art almost always shown in spaces that are noisy, too brightly lit and too big, not just in Washington, but practically everywhere. Some art may be able to handle this, but not most. Walking from the West Wing of the National Gallery, where the Old Masters are, to the modern collection in I. M. Pei's East Wing, is to go from a quiet, genteel, orderly space to an assault of bright lights and noise -- a chaotic cacophony of oddly shaped rooms, arbitrarily arranged and way out of scale. 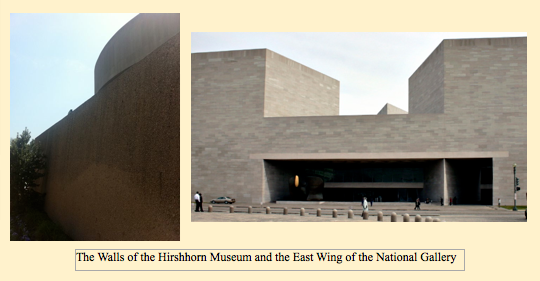 Could it still be the influence of Frank Lloyd Wright's Guggenheim after all these years? That might also explain why museums of modern art are usually surrounded by high blank walls outside, and distracting, wasteful, atriums inside. What are they thinking?

NATIONAL GALLERY
I spent almost half of my time here because, in addition to the Gauguin show, there were so many other exhibitions to see: Gabriel Metsu, 1629–1667 (until July 24th); Lewis Baltz: Prototypes/Ronde de Nuit (until July 31st); Venice: Canaletto and His Rivals (Until May 30th); Larger Than Life: Ter Brugghen's Saint Sebastian Tended by Irene (until May 15th); and In the Tower: Nam June Paik (until October 2nd). Plus the National Gallery's permanent collection has some of the best art in the world, including this bit of perfection best seen close up as illustrated in this detail:
Several of the 19th century French galleries in the main part of the museum are being renovated, but don't worry, most of that art is downstairs in an exhibition of the Chester Dale Collection, a major collection of mostly 19th and early 20th century French painting given to the museum in 1962. It’s installed in a lower, more crowded space mainly used for changing exhibitions of prints and drawings, but the work is so great it hardly matters. One of the many treats was seeing two great large group portraits, Picasso's Family of Saltimbanques and Manet's The Old Musician, displayed on opposite walls.
Gauguin, Maker of Myth
This is a big show — 120 paintings, drawings, prints and ceramic and wood sculptures. Despite his prominence, Gauguin isn't the easiest artist to like. His colors are acidic and wishy-washy — even his major exception, Vision of the Sermon, is so bold only because it was supposed to be seen in a dark church. In addition, the space in his paintings is disjointed, and his drawing and shapes are graceless.
Even more damning, there's something dry and inauthentic about his work. This whole savage, primitive, Tahiti baloney was just a calculated PR campaign to promote his work. I agree with Philip Kennicott's objection to the post-modern analysis espoused in the catalog:


...but Gauguin still awaits a proper understanding, a reckoning that is both artistic and moral. The worst thing about phrases such as "narrative strategies" is that they reduce biographical data to a post-modern stew of moral relativity: Fraudulent self-promotion becomes "self-mythologizing"; theft becomes playful appropriation; the repeated rape of a child - for what else can you call sex with a girl who wasn't mature enough to consent or economically or socially powerful enough to refuse - becomes something grouped under the theme "fictions of femininity."

Nevertheless, or maybe as a result, this is powerful and disturbing work — a dark and troubling lost paradise, hauntingly evoked.

In the Tower: Nam June Paik
I would have thought video pioneer Nam June Paik might be one of the few artists that could handle the East Wing ruckus, and that it would be a waste to put his work in the tower, a more intimate and secluded space, but the show, 20 videos and a few works on paper borrowed mainly from Paik's estate, worked beautifully there. I guess video is a private (as opposed to public) medium.

Paik is very well represented in Washington. In addition to this show, there are several major works on display in the Hirshhorn and American Art museums, including this popular favorite:
THE PHILLIPS COLLECTION
The Phillips Collection is open until 8:30 on Thursdays so I was able to go there after the National Gallery closed. (I’ve developed sturdy gallery legs over the years.) Maybe it's because they don't show much contemporary art, but the Phillips is very much an exception to the obnoxious MOMAs I was complaining about. Even their new additions maintain the intimacy of the original Phillips' home, and it's a pleasure to look at art there. (That’s why I so despair for the Barnes.)

Philip Guston, Roma
In 1970 Guston received a lot of negative criticism for an exhibition of his new work at New York’s Marlborough Gallery. The work was painted in a clumsy, cartoony style and dealt with political satire and allegorical narratives.  It was a radical departure from his popular Abstract Expressionist paintings, and stunned the art world.
Rome was a good escape for Guston, and inspiring. During the six months he spent as artist-in-residence at the American Academy in Rome in 1970–71, he was able to study the old masters and explore new possibilities for his art away from the art world. This show brings together for the first time 39 paintings from this period. All the work is small, no more than studies really, but exciting to see because they are precursors of the themes and images he would pursue later in his larger paintings.

David Smith Invents
This show was a real surprise to me. I thought I knew Smith’s work well, but this is work that wasn’t shown, or hardly ever shown. The work is a transition from the anthropomorphic, figurative works in the early 1950s to his famous large-scale steel abstractions. It is the most painterly work of his I've ever seen, not only because he literally painted these sculptures, but because they are as frontal as paintings. Greenberg must be turning over in his grave.
There were also many of his paintings and drawings in the show. Typical of sculptors, Davis stayed away from the edge, usually centering his shapes or lines.

Some favorites from the permanent collection:
Dead birds seems to be a Phillips specialty. They have some by Braque, Soutine, and several by a contemporary artist I can’t remember.

A very late Cezanne landscape that's more like one of his watercolors:
Check out this close-up of it I was allowed to take:
After the Phillips closed I had a late dinner and walked around the Dupont Circle area where the Phillips is located. The weather was glorious and the outside cafes were packed. I don't know if it's Obama or the same urban gentrification that occurred in New York, but Washington has become very young, prosperous and hip, at least around Dupont Circle and Downtown near Chinatown where the Portrait and American museums are, and where I spent part of the next day. More on that next post. 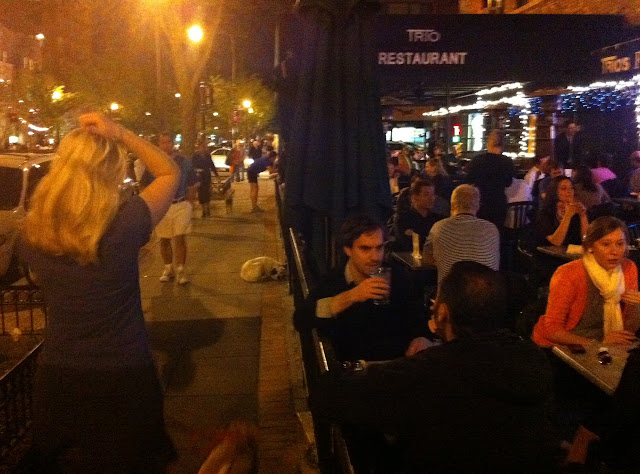 Posted by Charles Kessler at 4:01 PM

Thank you for the D.C. tour. Just went into the Phillips Collection to take a look at the small Guston paintings. Sorry not to see these in person. Looking forward to the next installment.

Did the same a couple of months ago; a day trip, which was rewarding. Liked the vibe at the Hirschorn. There were a lot of academics strolling around, being dialectical, but I preferred that to what I usually encounter in NY, which is something else, that I don't really know how to describe.
Unfortunately, I was too early for Palermo.
Liked a number of the galleries. Thought the Kelly gallery looked good, which surprised me, because that galleries are not that large.

Thomas, I had a very different vibe at the Hirshhorn: lots of noisy school kids and people making fun of the art.