From an extensive John Yau interview with Tom Nozkowski in the Brooklyn Rail:

I love being part of a community in time, you know? Before I decided to become an artist, I really thought about becoming a historian. I thought that would be a really interesting thing to do. One of the reasons I love painting, this singular thing, is the communal part of it, all sorts of people in different times and places, all trying to catch and hold some part of the visual continuum...

Nozkowski is a knowledgeable and literate artist who looks at a lot of art — and he’s a real mensch. Maybe it’s a sign the art world is maturing (at least some sector of the art world) that an artists' artist like Nozkowski can receive the recognition he has long deserved. I hope so. Here’s a link to his current Pace Gallery show, but be forewarned, this is one slow and cumbersome website. There are only a few days left; the show closes December 4th.
Each of Nozkowski’s paintings is very different, unlike the work of most other abstract artists. He works more in the manner of Richard Tuttle than Brice Marden, for example. (It’s perhaps worth noting that many other abstract painters make size a significant variant, but Nozkowski’s works are all the same size, 22” x 28”.)  Nozkowski’s work is always recognizably his, but the imagery and what goes on in the paintings are all very different — and there’s a lot going on indeed.  Also, unlike most current painting, Nozkowski’s work comes without a schpeel to justify it (see Christopher K. Ho at Edward Winkleman Gallery).

In the Rail interview, Nozkowski says his paintings are derived from personal experiences in the broadest sense: “Events, things, ideas—anything. Objects and places in the visual continuum, sure, but also from other arts and abstract systems. ... The reality my paintings draw upon is as complex, varied, and self-examining as I can make it.”

The thing is, one can’t come up with these kinds of rich and complex shapes out of your head. Head shapes are always boring. And the other way to generate interesting shapes — to use accident and chance — results in marks and shapes that feel arbitrary. (BTW, I think this is why Pollock moved away from his classic drip paintings.) But because Nozkowski’s marks and shapes are grounded in the real world, however tenuously, they feel like they mean something, even if we don’t know specifically what that is. On the other hand, if the work becomes too representational, like the drawing Untitled (P-38) 2008 (which looks like two headless dogs walking past each other in opposite directions), the painting loses its free-floating interaction. All the rectangles stay put and coalesce into one thing — dogs.
I’m reminded of what Charles Garabedian (who will be having a major retrospective opening soon in Santa Barbara) once said about his own work:  “I disagree with everything, including myself; so whenever I do something I contradict it.” Nozkowski’s paintings are a rich balance of contradictions. What at first appears to be a distinct figure-ground duality is confounded — sometimes with surprising results. In Untitled (8-136) (top) for example, the black shapes can be seen as space behind a blue shape; or the reverse: black shapes floating in front of a blue field. And the string of small colorful squares — don’t ask! They bounce all over the place.

Space is twisted and wobbles; shapes, formed of smaller shapes, dissolve and form other shapes (or colored spaces). His Untitled (8-129) (below) turns the figure and ground upside down. The smaller rectangles that make up the large central bluish shape are semi-opaque and loosely painted so each one sometimes becomes a field of color rather than a solid shape. They vibrate and interact among themselves, some advancing, others receding.  The yellow “ground” is full with the color of previous painting coming through (unfortunately this can’t be seen in reproduction). And the colorful shapes on the top bop into space at all kinds of quirky angles.
This is masterful work — an artist fully in control of his medium and the myriad of painterly moves he’s invented over the years. 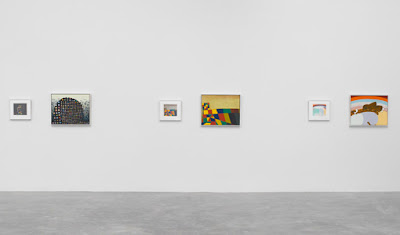 A word about the installation of this show:
In the past, Nozkowski would line up his paintings like soldiers, equally spaced, one after another. His work, more than most, needs to be seen one at a time, but since they’re all the same size there’s a tendency to walk in, take the show in all at once, and feel overwhelmed.  In this show, each painting has a drawing next to it that was made AFTER the painting, so things are broken up a bit. Still, the installation is too regular. I think it would be great if he tried sometime to install the work in as an eccentric a manner as the work itself. Or, if that is too much of a distraction, at least break things up a bit by occasionally changing the spacing of the paintings.

The best thing about this installation is that Nozkowski asked for the work to be shown with natural light until around 4:00 when it gets too dark. It’s the first time I ever saw his work under really great natural light and it absolutely glows. It’s especially thrilling on a semi-cloudy day when the light constantly shifts.
Charles Kessler is an artist and writer based in Jersey City
Posted by Charles Kessler at 7:32 PM

Great review! Loved reading your comments and seeing the few paintings again in your post. Thank you.

I really appreciate the opportunity presented here to get further into Nozkowski's art and thought.

Thanks to your essay and his interviews and his incredible work I have found a new painter I love. Thanks for your help.