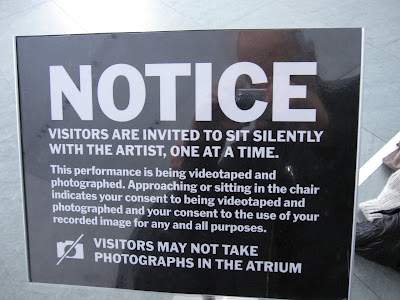 Once again the meaning of art changed when it entered a museum. For some reason this happens a lot at MoMA. The Richard Serra show a few years ago was an extreme example. Serra's early heavy lead works carried a lot of their power by threatening to fall, but at his MoMA retrospective this work was inexcusably roped off. And  I wrote before about Fluxus Art at MoMA and now it happened again with the recently concluded  exhibition Marina Abramovic, The Artist Is Present.
I used to think Abramovic's work was pretty tough, but this re-staging (and "staging" is the operative word here) seemed cold, decorative, soulless, and sometimes even hokey,

There's a difference between Theater and Performance -- at least there was in the sixties when Performance as an art form began. A Performance is (at least used to be) a real, spontaneous, here and now event that engages the audience directly. Traditional theater is a rehearsed and controlled replica of a fictional event in which the conceit is that there is no audience (the fourth wall). Performance Art tends to be ephemeral, one of a kind, whereas theater is reproducible. I'm not making a qualitative judgement here -- I love straight theater. I'm saying there is (or was) a difference in kind between Performance Art as it was originally conceived in the sixties, and traditional theater.

It's significant that Abramovic and the actors replicating her performances did not make eye contact with their viewers. It was a way to disconnect from the audience, to construct a fourth wall between viewer and actor. The one time I was moved by any of the work was Nude with Skeleton, when a performer, not apparently an actor or model, but an ordinary looking middle-aged woman, made eye contact with me.


Marina Abramovic in "Nude With Skeleton," Sean Kelly Gallery, NY
When I asked a performer, who was up in a wall-mounted bicycle seat stretched in a crucifixion position, if she was allowed to talk, a guard ran up to me and actually said "don't engage the performers." Contrast this with Chris Burden’s 1973 Performance when he had his hands nailed to the roof of a Volkswagen. (Significantly Burden refused to allow Abramovic to repeat this Performance at the Guggenheim in 2005  -- or for that matter to allow any of his Performances to be repeated.)

The one thing that came closest to a true Performance was Abramovic’s 700-hour sitting and staring (but not engaging) marathon.  But with all the stagey trappings of theater -- the spotlight, the roped off stage, arty and extravagant costume (full length dress in patriotic red, white or blue), pretentious placement in the middle of the rotunda, omnipresent guards -- it ultimately was over-blown and heavy-handed.

What we're left with in Abramovic's work is arty sculpture and photography, and sometimes visually striking theater -- but without the dramatic arc or compelling narrative that makes for good theater, and without the raw immediacy that makes Performance Art so visceral.

There was one good bit of news to come out of this show, however. Even though the replicas of Abramovic’s  performances were relatively tame, it wasn't so long ago that a Guiliani would have caused a big stink over it. So I guess that's a certain amount of progress.

Posted by Charles Kessler at 5:43 PM

Moma is closer to being a boutique than a museum. The Serra sculptures might as well as been Prada handbags; Abramovic's stand-ins, Abercrombie and Fitch store models.
At least Vanessa Beecroft was a little more honest about this.