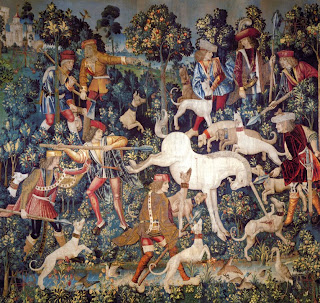 Rockefeller procured the Fuentiduena Apse, on loan from the dictator Franco’s Spain for 99 years. It was taken apart stone by stone, numbered and shipped Stateside to build a central part of a picturesque folly (The Cloisters) to house the oil baron turned philanthropist’s hoard of medieval art. It now sits on a promontory in one of the highest spots in uppermost Manhattan and the edifice is being rapidly eaten away by acid rain. Mid- Atlantic mugginess combined with car exhaust is doing a number on this church fragment, which came from Segovia, an arid region in Spain. The surface of its exterior roof- supporting corbels of saints and gargoyles is breaking down into calcium carbonate, as the polluted precipitation percolates out of the rough- hewn Spanish limestone. From coral unto stone unto dust shall it return. By the time the lease is up the shipping costs back to Spain should be greatly reduced.
So the oil (once thought medicinal and also sacred by Pennsylvanian Native Americans) that greased the wheels of the Industrial Revolution and powered Ford’s combustion engine and auto-assembly lines, pays for an ancient chapel as supporting compensation to a Fascist dictator of a (then) devoutly Catholic country to recreate the Old in the New World. The spoils of European piety become a garden folly housing the Unicorn Tapestries on the Hudson. Ford’s motorcars exhaust emissions ultimately efface this conceit of conspicuous consumption: the mortification of the simulacra.
To partly atone for his sins (and to maintain a pristine fringe view of foliage from the Cloisters tower across the river to the top of the New Jersey Palisades) the philanthropist Rockefeller donated his land holdings there to become the Palisades Interstate Parkway, which brackets, ironically, a picturesque automobile drive up the Hudson towards West Point and Bear Mountain. I’ve often admired the neo- gothic stonework of the parkway’s over passes, build as directed by Craftsman- Style architects employing cadres of Depression Era WPA workers. In Rockefeller’s landscape issues of Commerce and Art, Global Warming and job creation are interlinked. Too bad the king couldn’t resist cornering that Unicorn, though. The allegory of purity despoiled in the tapestries says it all exquisitely.
Posted by Tom McGlynn at 8:27 PM