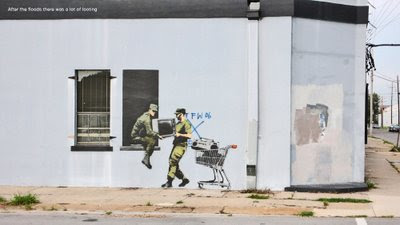 One of several Banksy tags seen in NOLA
About ten days ago I suddenly decided to hop in a van with volunteers from the NOLA Preservation Society and drive to New Orleans. I had always wanted to see the city, and after the national attention given to P.1 and the fact that one of the magazines (ArtVoices) I write for is headquartered there, I couldn't resist the trip. The perks of freelance! Twenty-six hours and 1300 miles later I found myself working on a documentary, interviewing artists and cultural preservationists about the the evolving creative life of the city.

Surprisingly, when asked how the arts in NO have changed post-Katrina, most people said they've gotten better. It was like the city had taken a step back to examine what really made it unique, realized that it was music, art, and food, and actually took the steps needed to protect and infuse those industries with new life. In a city of 300,000 and growing (June 2009 census estimate), where you still see abandoned, condemned houses lining the streets, there are over 70 functioning galleries. Think about it. And this doesn't include those ubiquitous restaurant/cafe/bar/hotel crossover spaces. For reference, Jersey City has a population of about 242,000 (2007 census estimate) and 7 galleries (my count of spaces that are full-time, single use).

Yet what is striking about New Orleans is not only how similar it really is to Jersey City and Newark population-wise, but how close the three are demographically, and how many of the same problems they share. Sub-par schools, inadequate recreational activities for kids, high violent crime, economic inequality, undereducated populations--I won't launch into a play-by-play, but what New Orleans has done to try and address a lot of these issues is turn to culture. By recognizing the importance of the city's art and music people have begun to both preserve their own cultural heritage and turn it into a vehicle for community development.

Now, this is me we're talking about....so I can't say all the art I saw was stellar, all the non-profits well-functioning, and all the galleries beautifully curated, but what struck me about the local "arts scene" was that it was more of a way of life. Musicians and artists alike are nurtured, supported, and criticised by the community--their neighbors, their friends, (and their government)--not isolated in studios. I wasn't there long enough to experience the full-extent of this "phenomenon"--but artists from all over the country are flocking to NOLA just to be a part of it, and I'll definitely be back.

Compare as much as I like: Jersey City is not New Orleans. Culturally speaking it's not nearly as developed, communal, or unified, but I wonder: if Jersey City chose (and really committed) to build itself around one unique, marketable trait, what would it be? Not art. Not music. (Those have a hard enough time existing as it is) Not science or industry, not food....definitely not green-space. History's first high-rise suburb? Ouch (sorry, it just slipped out). Is there something I'm missing here? Some magnificent heritage that could become the backbone of a rebirth? Shout it out.
Posted by Irene Borngraeber at 11:02 AM

Irene, I just saw your post about your visit to New Orleans. It seems that my visit overlapped with yours! I also enjoyed my time there very much (please see http://wwwkmw.blogspot.com/2009/07/new-orleans-state-of-mind.html).

This was my third visit to The Big Easy, and instead of experiencing it as a tourist, I looked at the city through the eyes of a possible future resident. I stayed with friends who have relocated there, had a fantastic birthday, met wonderful artists, and toured the galleries voraciously. The art scene is vibrant and inspiring and the city has an energy that is contagious ~